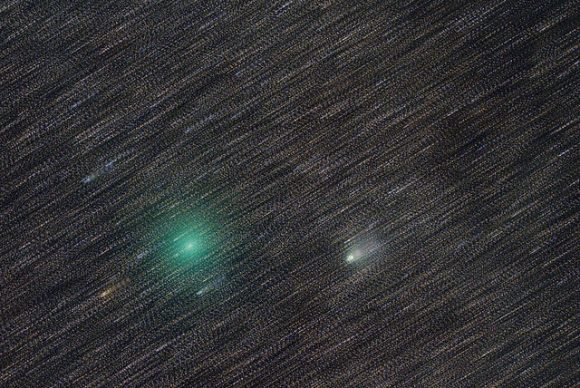 Hankering for some cometary action? An interplanetary interloper pays us a visit this weekend, sliding swiftly through the pre-dawn northern hemisphere sky.

If you’ve never caught sight of periodic comet 45/P Honda-Mrkos-Pajdušáková, this week is a good time to try. Currently shining at magnitude +6.5, the comet makes a close 0.08 AU (7.4 million miles or 12.3 million kilometers) pass near the Earth on Saturday, February 11, at 14:44 Universal Time (UT) or 9:44 AM Eastern Standard Time. This is the closest passage of the comet for the remainder of this century, and with the Moon also reaching Full this weekend, the time to track down this comet is now. 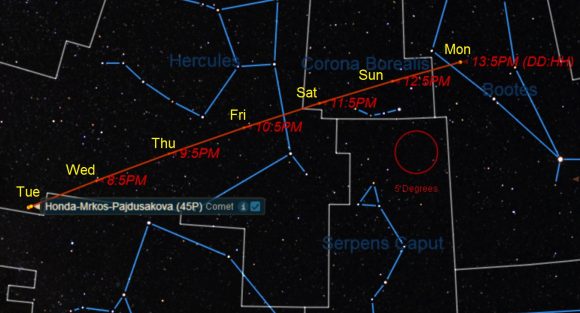 We wrote about the first act for this comet last December, and Bob King also wrote up a preview last month. The comet passed perihelion 0.53 AU (49.3 million miles/ 82.1 million kilometers) from the Sun on New Year’s Eve 2016, reemerging into the dawn sky. It’s now on a swift sprint through the constellation Ophiuchus, and will cross Hercules at closest approach and into Corona Borealis and Boötes in just one week. At its closest, it’ll be moving at a whooping 23 arc minutes per hour, about three-quarters the diameter of a Full Moon! 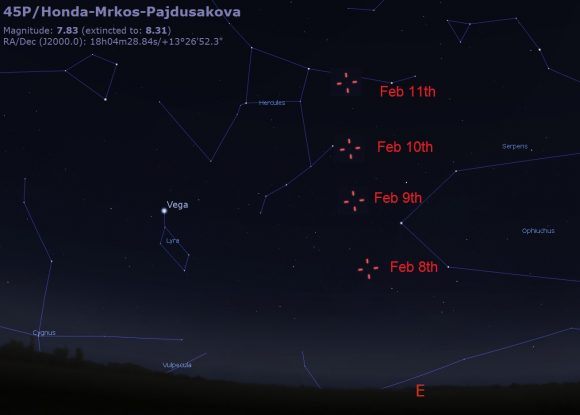 The position of Comet 45/P as seen from latitude 30 degrees north at 4 AM. Credit: Stellarium.

At closest approach, the comet many just top naked eye brightness under dark skies at +6 magnitude.

Independently discovered by three observers worldwide in late 1948, Comet 45/P Honda-Mrkos-Pajdušáková orbits the Sun once every 5.25 years. The cumbersome name is often abbreviated as “Comet 45P HMP” or sometimes simply “Comet 45P.” The comet actually passed close enough back in 2011 for Arecibo radar to ping it, one of the very few comets to do so.

Not all apparitions of a given comet are equal, and most passages of Comet 45P were and will be uneventful. Dr. P. Clay Sharrod of the Arkansas Sky Observatory recently wrote a great account of the 1974 passage of Comet 45P, hearkening back to the same year when we were all awaiting Comet Kohoutek and Comet West was yet to come. This account might also hint at what could be in store for comet hunters this weekend. 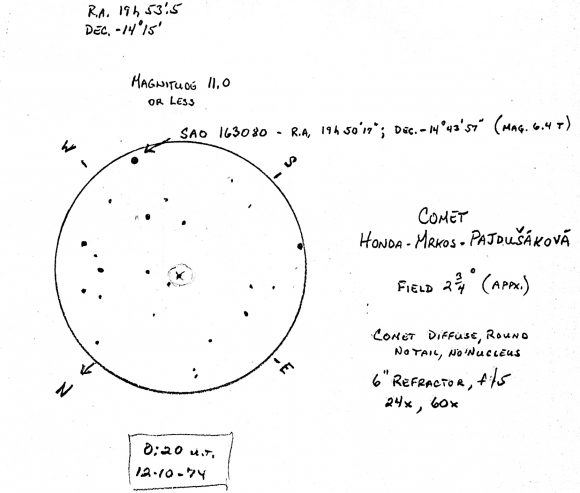 We managed to nab Comet 45P for the first time this AM from central Florida, though its still a tough catch. Shining at magnitude +7.5, we wouldn’t have otherwise noticed it as we swept along with our trusty Canon 15×45 image-stabilized binocs. Star-hopping finally brought us to the comet, a little fuzzy ‘star’ that stubbornly refused to snap into focus. 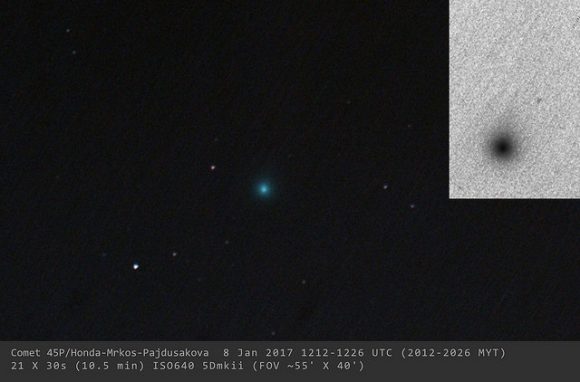 Unfortunately, the Moon reaches Full on Friday night, entering into the dawn sky this weekend. I’d advise hunting for the comet on every clear morning leading up to this weekend as the comet vaults northward into the pre-dawn sky. Friday night’s subtle penumbral eclipse won’t help much by way of dimming the Moon, though you can always place a house or hill between yourself and the Moon in a bid to block it out and aid in your cometary quest. There’s also a great photo op on February 16, when Comet 45P passes less than three degrees from the globular cluster M3.

As close shaves go, this passage of Comet 45P ranks as the 21st closest recorded passage of a comet near the Earth. The record goes to Comet Lexell, which passed just 0.0151 AU (1.4 million miles, or just under six times the distance to the Moon) past the Earth on July 1st, 1770. At its closest, Lexell had a visible coma spanning more than two degrees, more than four times the diameter of a Full Moon. In recent times, the last close passage of a comet other than 45P was Comet IRAS-Araki-Alcock, which zipped 0.063 AU past the Earth on June 12, 1983. 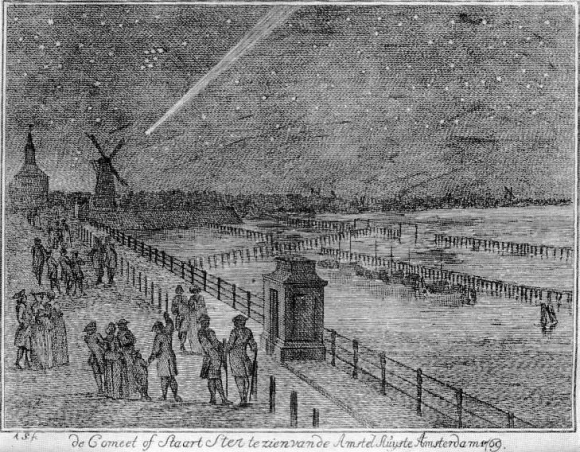 Ah, those were the days… a depiction of the Great Comet of 1769 as seen from Amsterdam, just one year (!) prior to the passage of Lexell’s Comet. Image in the Public Domain.

The gambler’s fallacy would say we’re due for the next big bright comet, though the universe seems to stubbornly refuse to roll the dice. In addition to 45P, 2017 does host a string of binocular comets, including Comet 2P Encke (March), Comet 41P/Tuttle-Giacobini-Kresák (April), Comet C/2015 ER61 PanSTARRS (May), and Comet C/2015 V2 Johnson (June). These are all explored in detail in our free e-book guide to the year, 101 Astronomical Events for 2017 out from Universe Today.

Stay warm on your comet vigil, and let us know of those observational tales of tribulation and triumph.