How Long is a Day on Venus?

How Long is a Day on Venus? 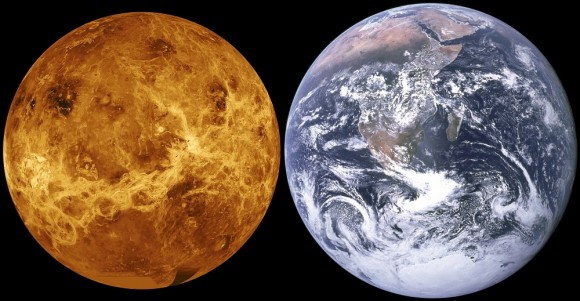 Venus is often referred to as “Earth’s Sister” planet, because of the various things they have in common. For example, both planets reside within our Sun’s habitable zone (aka. “Goldilocks Zone“). In addition, Earth and Venus are also terrestrial planets, meaning they are primarily composed of metals and silicate rock that are differentiated between a metallic core and a silicate mantle and crust.

Beyond that, Earth and Venus could not be more different. And two ways in which they are in stark contrast is the time it takes for the Sun to rise, set, and return to the same place in the sky (i.e. one day). In Earth’s case, this process takes a full 24 hours. But in Venus’ case, its slow rotation and orbit mean that a single day lasts as long as 116.75 Earth days.

On Earth, a sidereal days last 23 hours 56 minutes and 4.1 seconds, whereas a solar day lasts exactly 24 hours. In Venus’ case, it takes a whopping 243.025 days for the planet to rotate once on its axis – which is the longest rotational period of any planet in the Solar System. In addition, it rotates in the opposite the direction in which it orbits around the Sun (which it takes about 224.7 Earth days to complete).

From all this, one might assume that a single day lasts longer than a year on Venus. But again, the distinction between a sidereal and solar days means that this is not true. Combined with its orbital period, the time it takes for the Sun to return to the same point in the sky works out to 116.75 Earth days, which is little more than a half a Venusian (or Cytherian) year.

At a closest average distance of 41 million km (25,476,219 mi), Venus is the closest planet to Earth. Credit: NASA/JPL/Magellan

Unlike Earth or Mars, Venus has a very low axial tilt – just 2.64° relative to the ecliptic. In fact, it’s axial tilt is the one of the lowest in the Solar System, second only to Mercury (which has an extremely low tilt of 0.03°). Combined with its slow rotational period and dense atmosphere, this results in the planet being effectively isothermal, with virtually no variation in its surface temperature.

The composition of the atmosphere is extremely toxic, consisting primarily of carbon dioxide (96.5%) with small amounts of nitrogen (3.5%) and traces of other gases – most notably sulfur dioxide. Combined with its density, the composition generates the strongest greenhouse effect of any planet in the Solar System.

According to multiple Earth-based surveys and space missions to Venus, scientists have learned that its weather is rather extreme. The entire atmosphere of the planet circulates around quickly, with winds reaching speeds of up to 85 m/s (300 km/h; 186.4 mph) at the cloud tops, which circle the planet every four to five Earth days.

At this speed, these winds move up to 60 times the speed of the planet’s rotation, whereas Earth’s fastest winds are only 10-20% of the planet’s rotational speed. Spacecraft equipped with ultraviolet imaging instruments are able to observe the cloud motion around Venus, and see how it moves at different layers of the atmosphere. The winds blow in a retrograde direction, and are the fastest near the poles.

Closer to the equator, the wind speeds die down to almost nothing. Because of the thick atmosphere, the winds move much slower as you get close to the surface of Venus, reaching speeds of about 5 km/h. Because it’s so thick, though, the atmosphere is more like water currents than blowing wind at the surface, so it is still capable of blowing dust around and moving small rocks across the surface of Venus.

Venus flybys have also indicated that its dense clouds are capable of producing lightning, much like the clouds on Earth. Their intermittent appearance indicates a pattern associated with weather activity, and the lightning rate is at least half of that on Earth. 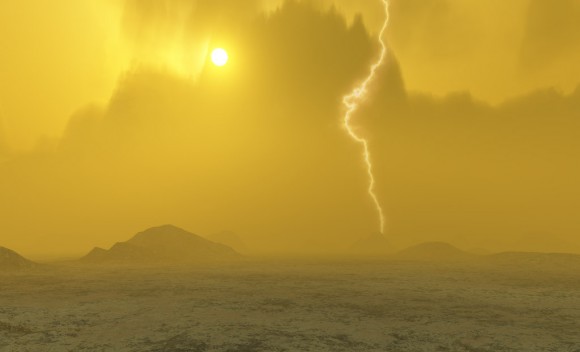 Artist concept of the surface of Venus, showing its dense clouds and lightning storms. Credit: NASA

Yes, Venus is a planet of extremes. Extreme heat, extreme weather, and extremely long days! In short, there’s a reason why nobody lives there. But who knows? Given the right kind of technology, and perhaps even some dedicated terraforming efforts, people could one day being watching the Sun rising in the west and setting in the east.

Astronomy Cast also has a good episodes on the subject. Here’s Episode 50: Venus

The post How Long is a Day on Venus? appeared first on Universe Today.