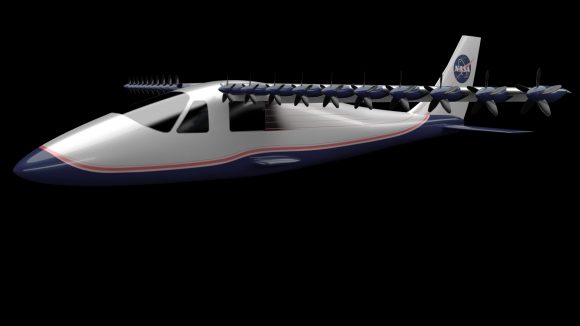 Flying cars have become something of a hot ticket item of late. In the past few years, companies like Terrafugia, Aeromobil and Moller International have all grabbed headlines with their particular designs. And soon enough, international transportation giant Uber could be joining the ranks of those looking to turn a popular staple of science fiction into science fact.

In a move to expand their ride-sharing services to the skies, the company recently hired NASA aerospace engineer Mark D. Moore to spearhead Uber Elevate. For 30 years, Moore has worked for NASA, researching advanced aircraft and technologies and vertical take-off and landing (VTOL) applications. And in 2010, he published a white paper in which detailed a revolutionary new concept for electric flying cars.

In this paper – titled “NASA Puffin Electric Tailsitter VTOL Concept” – Moore presented an outline for equipping  VTOL craft with electronic engines. The benefits of this, he claimed, include zero emissions, a high engine power to weight rating, high efficiency and very little noise or vibrations. On top of that, the technology is scalable, offering the same benefits regardless of size.

This study was the product of Moore’s many years working with the Aeronautics Systems Analysis Branch of NASA’s Langley Research Center, where he specialized in the development of distributed electric propulsion. For the past five years, Moore was the Principle Investigator of the Scalable Convergent Electric Propulsion Technology and Operations Research (SCEPTOR) project, a NASA program to create the first manned Distributed Electric Propulsion aircraft.

Prior to this, Moore was also the Principle Investigator of the Leading Edge Asynchronous Propeller Technology/Hybrid-Electric Integrated Systems Testbed (LeapTECH/HEIST) project, a one-year program that developed and tested a electric propulsion wing that used 18 propellers to achieve flight. The fruits of these labors can be seen with the X-57 “Maxwell” (shown above), a convergent electronic propulsion plane that relies on 14 electric motors with uniquely-designed wings to improve efficiency and reduce noise.

Beyond pushing the envelope for advanced aviation and propulsion designs, Moore strongly believes that this technology – which combines the benefits of efficient and lightweight motors with improvements in battery technology and automation – is the solution to the problems of traffic congestion and urban pollution caused by too many automobiles.

Naturally, his white paper garnered a lot of attention, particularly from billionaire entrepreneurs who are at the forefront of technological development. As Bloomberg Businessweek reported in the summer of 2016, Google co-founder Larry Page created two startups (Zee Aero and Kitty Hawk) to develop the technology, apparently in response to reading Moore’s paper. 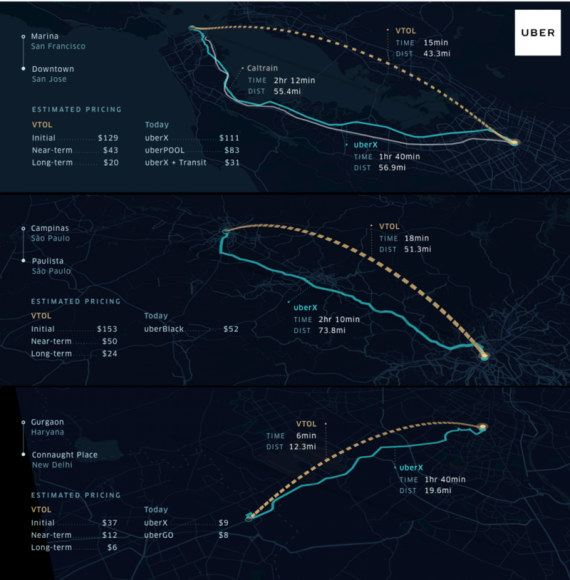 Maps prepared by Uber to demonstrate the effectiveness of on-demand aviation vs traditional commutes. Credit: Uber

In October of 2016, Uber Technologies Inc. followed suit and announced the creation of Uber Elevate, a subsidiary charged with developing the technology, and has since hired Moore to serve as Elevate’s director of engineering. Shortly after Elevate was announced, Uber released their own white paper – a 99-page document that outlined the company’s vision of what they called “on-demand aviation”. As it says in this paper:

“Just as skyscrapers allowed cities to use limited land more efficiently, urban air transportation will use three-dimensional airspace to alleviate transportation congestion on the ground. A network of small, electric aircraft that take off and land vertically (called VTOL aircraft for Vertical Take-off and Landing, and pronounced vee-tol), will enable rapid, reliable transportation between suburbs and cities and, ultimately, within cities.

Such a plan would not only rely on VTOL network to bypass the usual infrastructure of roads, railways, bridges and tunnels, but would also call for the repurposing of parts of the urban landscape. Basically, Uber’s plan calls for transforming the tops of parking garages, existing helipads, and unused land surrounding highway interchanges to create a network of “vertiports” and “versistops”, complete with charging stations for their vehicles.

Acquiring Moore was certainly a coup de grace, as the NASA engineer was just a year away from retirement. As a result, he will not be eligible for his pension and health benefits. However, the move appears to be motivated in part by Moore’s desire to see the development of the technology become a reality. And these days, it seems that the private sector – and not within federal agencies – is where this is most likely to happen.

“Uber’s well suited to lead this because they are the on-demand market leader, with 55 million active monthly users. They’ve solved the multi-modal last mile problem, with incredible access and availability that provides wait times in major urban areas of only 2 to 3 minutes.”

Naturally, one of the biggest questions is whether Uber’s vehicles will be piloted or automated. On the one hand, Uber has launched a series of pilot project to test self-driving cars in various cities across the US. And a little over a week ago (Jan. 31st, 2017), Uber announced that it will be partnering with Daimler to introduce the automaker’s self-driving cars to their network.

These moves are a strong indication that the company is looking to automate in the long-term. And as Moore indicated, there is likely to be a period of transition:

“There will be an evolution from professional human pilots to autonomy over time as the background automation proves itself reliable and not requiring intervention by the human pilot – just as Uber is doing now with autonomous cars on the ground (which is a much harder problem because of how cluttered the ground environment is.”

In addition to Google and Uber, multinational aerospace giant Airbus is also working on its own VTOL car project – known as Project Vahana. As the company announced in November of 2016, Vahana is being run by the company’s Silicon Valley arm (A³, or “a cubed”) with the aim of producing of self-piloted VTOL craft by the early 2020s.

And there’s Joby Aviation, another Silicon Valley-based company that specializes in airframe design and electric motors that is hoping to expand into the VTOL market. Clearly, there is no shortage of entrepreneurs looking to harness the dream of VTOL transportation.

Of course, there are those who would say that these VTOL concepts are not “flying cars” in the strictest sense. Whereas companies like Aeromobil, Terrafugia and Moller International are specializing in vehicles that can both drive on land and fly, Google Airbus and Uber are looking to create vehicles that are more akin to transportation drones or personal helicopters.

But the terminology behind this concept, which has deep roots in science-fiction, has never been entirely accurate. In the end, the term “flying car” has been used rather loosely to refer to vehicles that relied on aerial traffic networks to get people from point A to point B. And with multiple companies looking to make this old promise a reality, the promise of flying cars in the 21st century might finally come true!

2017-02-08
Previous Post: 31 Years After Disaster, Challenger Soccer Ball Finally Gets To Orbit
Next Post: The Magellenic Clouds Stay Connected By A String Of Stars