The Magellenic Clouds Stay Connected By A String Of Stars

The Magellenic Clouds Stay Connected By A String Of Stars 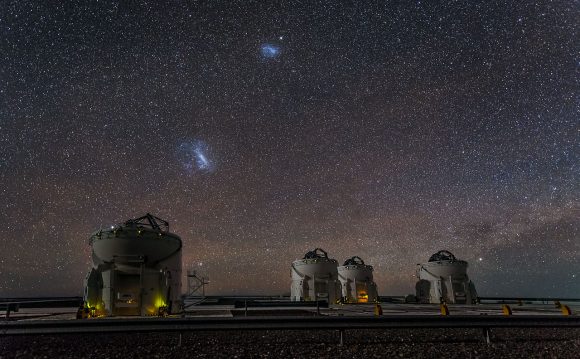 Astronomers have finally observed something that was predicted but never seen: a stream of stars connecting the two Magellanic Clouds. In doing so, they began to unravel the mystery surrounding the Large Magellanic Cloud (LMC) and the Small Magellanic Cloud (SMC). And that required the extraordinary power of the European Space Agency’s (ESA) Gaia Observatory to do it.

The Large and Small Magellanic Clouds (LMC and SMC) are dwarf galaxies to the Milky Way. The team of astronomers, led by a group at the University of Cambridge, focused on the clouds and on one particular type of very old star: RR Lyrae. RR Lyrae stars are pulsating stars that have been around since the early days of the Clouds. The Clouds have been difficult to study because they sprawl widely, but Gaia’s unique all-sky view has made this easier.

The Magellanic Clouds are a bit of a mystery. Astronomers want to know if our conventional theory of galaxy formation applies to them. To find out, they need to know when the Clouds first approached the Milky Way, and what their mass was at that time. The Cambridge team has uncovered some clues to help solve this mystery.

The team used Gaia to detect RR Lyrae stars, which allowed them to trace the extent of the LMC, something that has been difficult to do until Gaia came along. They found a low-luminosity halo around the LMC that stretched as far as 20 degrees. For the LMC to hold onto stars that far away means it would have to be much more massive than previously thought. In fact, the LMC might have as much as 10 percent of the mass that the Milky Way has. 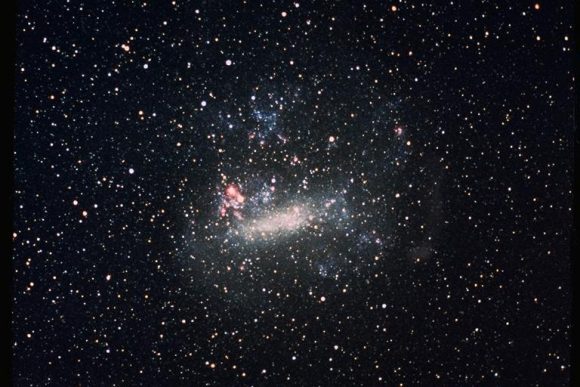 The Arrival of the Magellanic Clouds

That helped astronomers answer the mass question, but to really understand the LMC and SMC, they needed to know when the clouds arrived at the Milky Way. But tracking the orbit of a satellite galaxy is impossible. They move so slowly that a human lifetime is a tiny blip compared to them. This makes their orbit essentially unobservable.

But astronomers were able to find the next best thing: the often predicted but never observed stellar stream, or bridge of stars, stretching between the two clouds.

A star stream forms when a satellite galaxy feels the gravitational pull of another body. In this case, the gravitational pull of the LMC allowed individual stars to leave the SMC and be pulled toward the LMC. The stars don’t leave at once, they leave individually over time, forming a stream, or bridge, between the two bodies. This action leaves a luminous tracing of their path over time.

A Bridge of Stars… and Gas

The most recent interaction between the Clouds was about 200 million years ago. At that time, the Clouds passed close by each other. This action formed not one, but two bridges: one of stars and one of gas. By measuring the offset between the star bridge and the gas bridge, they hope to narrow down the density of the corona of gas surrounding the Milky Way.

The density of the Milky Way’s Galactic Corona is the second mystery that astronomers hope to solve using the Gaia Observatory.

The Galactic Corona is made up of ionised gas at very low density. This makes it very difficult to observe. But astronomers have been scrutinizing it intensely because they think the corona might harbor most of the missing baryonic matter. Everybody has heard of Dark Matter, the matter that makes up 95% of the matter in the universe. Dark Matter is something other than the normal matter that makes up familiar things like stars, planets, and us.

The other 5% of matter is baryonic matter, the familiar atoms that we all learn about. But we can only account for half of the 5% of baryonic matter that we think has to exist. The rest is called the missing baryonic matter, and astronomers think it’s probably in the galactic corona, but they’ve been unable to measure it. 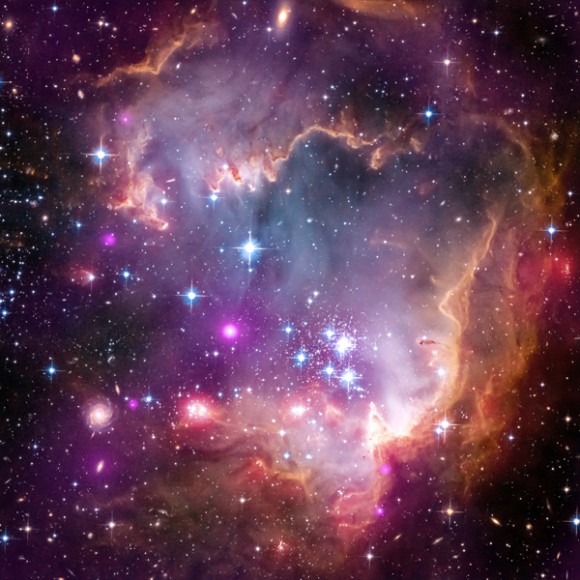 Understanding the density of the Galactic Corona feeds back into understanding the Magellanic Clouds and their history. That’s because the bridges of stars and gas that formed between the Small and Large Magellanic Clouds initially moved at the same speed. But as they approached the Milky Way’s corona, the corona exerted drag on the stars and the gas. Because the stars are small and dense relative to the gas, they travelled through the corona with no change in their velocity.

But the gas behaved differently. The gas was largely neutral hydrogen, and very diffuse, and its encounter with the Milky Way’s corona slowed it down considerably. This created the offset between the two streams.

When they did so, their results showed that the missing baryonic matter could be accounted for in the corona. Or at least a significant fraction of it could. So what’s the end result of all this work?

It looks like all this work confirms that both the Large and Small Magellanic Clouds conform to our conventional theory of galaxy formation.

The post The Magellenic Clouds Stay Connected By A String Of Stars appeared first on Universe Today.