The Race To Image Exoplanets Heats Up!

The Race To Image Exoplanets Heats Up! 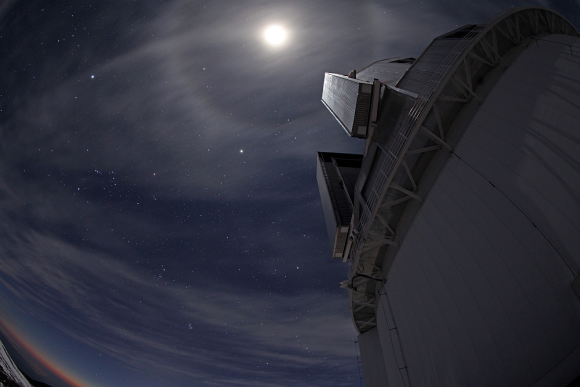 Thanks to the deployment of the Kepler mission, thousands of extrasolar planet candidates have been discovered. Using a variety of indirect detection methods, astronomers have detected countless gas giants, super Earths, and other assorted bodies orbiting distant stars. And one terrestrial planet (Proxima b) has even been found lurking in the closest star system to Earth – Proxima Centauri.

The next step, quite logically, is to observe these planets directly. Hence why the Subaru Coronagraphic Extreme Adaptive Optics (SCExAO) instrument was commissioned at the National Astronomical Observatory of Japan (NAOJ) in  Mauna Kea, Hawaii. Designed to allow for the direct detection of planets around other stars, this instrument will help ensure that the Subaru Telescope remains on the cutting-edge of exoplanet hunting.

As of January 22nd, 2017, some 3,565 exoplanet candidates have been detected in 2,675 planetary systems, and over 2000 of these have been confirmed. However, as already noted, the vast majority of these have been detected by  indirect means – generally through the measurement of a star’s radial velocity, or by measuring dips in a star’s luminosity as an exoplanet passes in front of it (i.e. the transit method).

Adaptive Optics, meanwhile, have allowed for the detection of exoplanets directly. When used in astronomy, this technology removes the the effects of atmospheric interference so that light from distant stars or planets can be seen clearly. Relying on experimental technology, the SCExAO was specifically designed and optimized for imaging planets, and is one of several newly-commissioned extreme AO instruments.

However, as Dr. Thayne Currie – a research associate at the NOAJ – indicated, the Observatories on Mauna Kea are particularly well suited to the technology. “Mauna Kea is the best place on this planet to see planets in other stellar systems,” he said. “Now, we finally have an instrument designed to utilize this mountain’s special gifts and the results are breathtaking.”

What makes the SCExAO special is that it allows astronomers the ability to image planets with masses and orbital separations that are similar to those in our own Solar System. So far, about a dozen planets have been detected directly using AO instruments, but these planets have all been gas giants with 4 to 13 times the mass of Jupiter, and which orbit their stars at distances beyond that of Neptune from our Sun.

This improved imaging capacity is made possible by the SCExAO’s ability to compensate for atmospheric interference at a faster rate. This will enable the Subaru Telescope to be able to capture far images of distant stars that are sharper and subject to less glare. And astronomers will be able to discern the presence of fainter objects that are circling these stars – i.e. exoplanets – with greater ease.

The first discovery made with the SCExAO, took place back in October of 2016. At the time, the Subaru telescope had detected a debris disk around HD 36546 – a 2 solar-mass star in the direction of the Taurus constellation – which appeared almost edge on. Located about twice as far from HD 36546 as the Kuiper Belt is from our Sun, this disk is believed to be the youngest debris disk ever observed (3 to 10 million years old).

This test of the SCExAO not only revealed a disk that could be critical to studying the earliest stages of icy planet formation, but demonstrated the extreme sensitivity of the technology. Basically, it allowed the astronomers conducting the study to rule out the existence of any planets in the system, thus concluding that planetary dynamics played no role in sculpting the disk.

More recently, the SCExAO instrument managed to directly detect multiple planets in the system known as HR 8799, which it observed in July of 2016. Prior to this, some of the systems four planets were spotted by surveys conducted using the Keck and the Subaru telescope (before the SCExAO was incorporated). However, these surveys could not correct for all the glare coming from HR 8799, and could only image two of three of the planets as a result.

A follow-up was conducted in the Fall of 2016, combining data from the SCExAO with that obtained by the Coronagraphic High Angular Resolution Imaging Spectrograph (CHARIS). This resulted in even clearer detection of the system’s inner three planets, not to mention high-quality spectrographic data that could allow researchers to determine the chemical compositions of their atmospheres.

The star and multiple planet system HR 8799 imaged using the SCEAO and the HiCIAO camera (left) and the Keck facility AO system coupled with the NIRC2 camera (right). Credit: NAOJ

As Dr. Olivier Guyon, the head of the SCExAO project, explained, this is a major improvement over other AO surveys. It also presents some major advantages when it comes to exoplanet hunting. “With SCExAO, we know not only the presence of a planet but also its character such as whether it is cloudy and what molecules it has, even if that planet is tens of trillions of miles away.”

Looking at the year ahead, the SCExAO is scheduled to undergo improvements that will allow it to detect planets that are 10 to 10o times fainter than what it can right now. The CHARIS instrument is also scheduled for additional engineering tests to improve its capabilities. These improvements are also expected to be incorporated into next-generation telescopes like the Thirty Meter Telescope – which is currently under construction at Mauna Kea.

Other recently-commissioned extreme AO instruments include the Gemini Planet Imager (GPI) at Gemini Observatory on its telescope in Chile, the Spectro-Polarimetric High-contrast Exoplanet Research (SPHERE) on Very Large Telescope (VLT) in Chile, and the AO system on the Large Binocular Telescope (LBT) in Arizona. And these are only some of the current attempts to reduce interference and make exoplanets easier to detect.

For instance, coronagraph are another way astronomers are attempting to refine their search efforts. Consisting of tiny instruments that are fitted inside telescopes, coronagraphs block the incoming light of a star, thus enabling telescopes to spot the faint light being reflected from orbiting planets. When paired with spectrometers, scientists are able to conduct studies of these planet’s atmospheres. 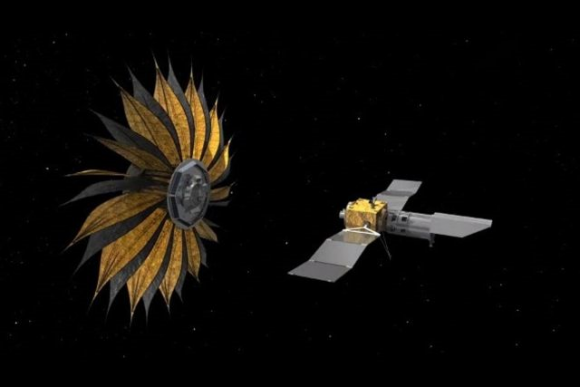 An artist’s illustration of the Starshade deployed near its companion space telescope. Credit: NASA

And then you have more ambitious projects like Starshade, a concept currently being developed by Northrop Grumman with the support of NASA’s Jet Propulsion Laboratory. This concept calls for a giant, flower-shaped screen that would be launched with one of NASA’s next-generation space telescopes. Once deployed, it would fly around in front of the telescope in order to obscure the light coming from distant stars.

The era of exoplanet discovery loometh! In the coming decades, we are likely to see an explosion in the number of planets were are able to observe directly. And in so doing, we can expect the number of potentially habitable exoplanets to grow accordingly.

The post The Race To Image Exoplanets Heats Up! appeared first on Universe Today.