Watch the Moon Make a Pass at Earth’s Shadow, Then Kiss Regulus This Valentine’s Weekend

Watch the Moon Make a Pass at Earth’s Shadow, Then Kiss Regulus This Valentine’s Weekend 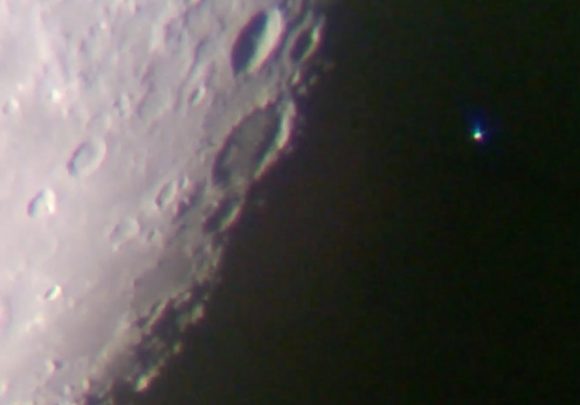 In the southern hemisphere this weekend in the ‘Land of Oz?’ Are you missing out on the passage of Comet 45/P Honda-Mrkos-Pajdušáková, and the penumbral lunar eclipse? Fear not, there’s an astronomical event designed just for you, as the Moon occults (passes in front of) the bright star Regulus on the evening of Saturday, January 11th.

The entire event is custom made for the continent of Australia and New Zealand, occurring under dark skies. Now for the bad news: the waning gibbous Moon will be less than 14 hours past Full during the event, meaning that the ingress (disappearance) of Regulus will occur along its bright leading limb and egress (reappearance) will occur on the dark limb. We prefer occultations during waxing phase, as the star winks out on the dark limb and seems to slowly fade back in on the bright limb. 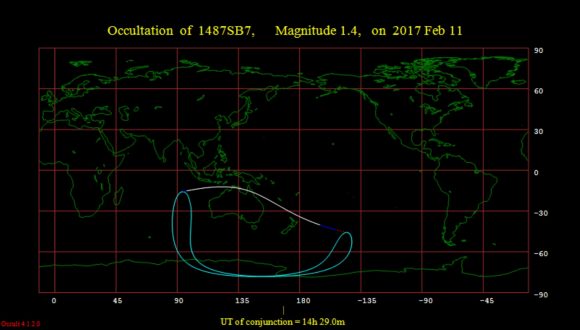 The footprint for the February 11th occultation of Regulus by the Moon. Image credit: Occult 4.2 software

The International Occultation Timing Association has a complete list of precise ingress/egress times for cities located across the continent. An especially interesting region to catch the event lies along the northern graze line across the sparsely populated Cape York peninsula, just north of Cairns. 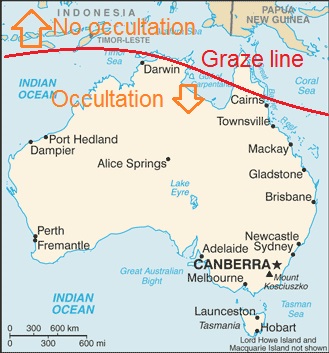 The northern grazeline for the February 11th occultation of Regulus by the Moon. Graphic by author.

The Moon occults Aldebaran and then Regulus six days later during every lunation in 2017. This is occultation number three in a cycle of 19 running from December 18, 2016 to April 24, 2018. The Moon occults Regulus 214 times in the 21st century, and Regulus is currently the closest bright star to the ecliptic plane, just 27′ away.

We’ve also got a very special event just under 14 hours prior, as a penumbral lunar eclipse occurs, visible on all continents… except Australia. Mid-eclipse occurs at 00:45 Universal Time (UT, Saturday morning on February 11th), or 7:45 PM Eastern Standard Time (EST) on the evening of Friday, February 10th, when observers may note a dusky shading on the northern limb of the Moon as the Moon just misses passing through the dark edge of the Earth’s inner umbral shadow. Regulus will sit less than seven degrees off of the lunar limb at mid-eclipse Friday night.

How often does an eclipsed Moon occult a bright star? Well, stick around until over four centuries from now on February 22nd, 2445, and observers based around the Indian Ocean region can watch just such an event, as the eclipsed Moon also occults Regulus. Let’s see, I should have my consciousness downloaded into my second android body by then…

A graphic study of the simultaneous lunar eclipse and occultation of Regulus in 2445. Credit: NASA/GSFC/Fred Espenak/Occult 4.2/Stellarium.

This eclipse also marks the start of eclipse season one of two, which climaxes with an annular eclipse crossing southern Africa and South America on February 26th. The second and final eclipse season of 2017 starts with a partial lunar eclipse on August 7th, which sets us up for the Great American Eclipse crossing the United States from coast to coast on August 21st, 2017.

A lunar occultation of Regulus also provides a shot at a unique scientific opportunity. Spectroscopic measurements suggest that the primary main sequence star possesses a small white dwarf companion, a partner which has never been directly observed. This unseen white dwarf may – depending on the unknown orientation of its orbit – make a brief appearance during ingress or egress for a fleeting split second, when the dark limb of the Moon has covered dazzling Regulus. High speed video might just nab a double step occlusion, as the white dwarf companion is probably about 10,000 times fainter than Regulus at magnitude +11 at the very brightest. Regulus is located 79 light years distant.

Our best results for capturing an occultation of a star or planet by the Moon have always been with a video camera aimed straight through our 8” Schmidt-Cassegrain telescope. The trick is always to keep the star visible in the frame near the brilliant Full Moon. Cropping the Moon out of the field as much as possible can help somewhat. Set up early, to work the bugs out of focusing, alignment, etc. We also run WWV radio in the background for an audible time hack on the video.

The January 15th, 2017 occultation of Regulus by the Moon. Image credit and copyright: Lucca Ruggiero.

Comets and eclipses and occultations, oh my. It’s a busy weekend for observational astronomy, for sure. Consider it an early Valentine’s Day weekend gift from the Universe.

Webcasting the eclipse or the occultation this weekend? Let us know, and send those images of either event to Universe Today’s Flickr forum.

Read about eclipses, occultations and more tales of astronomy in our yearly guide 101 Astronomical Events For 2017, free from Universe Today.

The post Watch the Moon Make a Pass at Earth’s Shadow, Then Kiss Regulus This Valentine’s Weekend appeared first on Universe Today.

2017-02-09
Previous Post: The Magellenic Clouds Stay Connected By A String Of Stars
Next Post: Can We Launch Nuclear Waste Into the Sun?