This sequence of photos taken on October 18, 2013 nicely show the different phases of a penumbral lunar eclipse. The coming penumbral eclipse will likely appear even darker because Earth’s shadow will shade to the top (northern) half of the Moon rich in dark lunar “seas” at maximum. Credit: AstroTripper 2000

Not many people get excited about a penumbral eclipse, but when it’s a deep one and the only lunar eclipse visible in North America this year, it’s worth a closer look. What’s more, this Friday’s eclipse happens during convenient, early-evening viewing hours. No getting up in the raw hours before dawn. 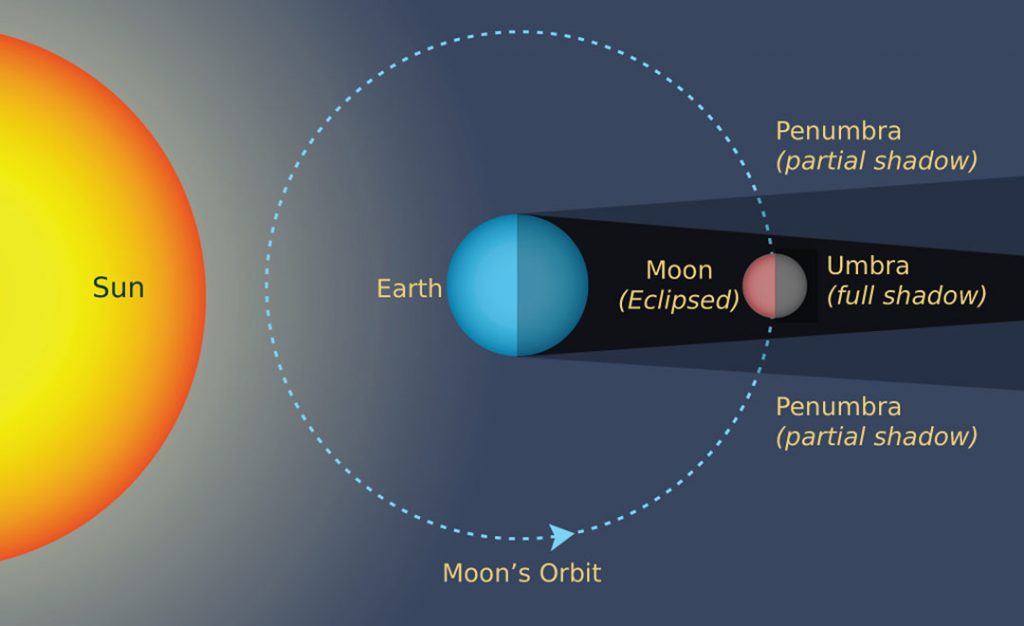 Lunar eclipses — penumbral, partial and total — always occur at Full Moon, when the Moon, Earth and Sun line up squarely in a row in that order. Only then does the Moon pass through the shadow cast by our planet. Credit: Starry Night with additions by the author

During a partial or total lunar eclipse, the full moon passes first through the Earth’s outer shadow, called the penumbra, before entering the dark, interior shadow or umbra. The penumbra is nowhere near as dark as the inner shadow because varying amounts of direct sunlight filter into it, diluting its duskiness.

To better understand this, picture yourself watching the eclipse from the center of the Moon’s disk (latitude 0°, longitude 0°). As you look past the Earth toward the Sun, you would see the Sun gradually covered or eclipsed by the Earth. Less sunlight would be available to illuminate the Moon, so your friends back on Earth would notice a gradual dimming of the Moon, very subtle at first but becoming more noticeable as the eclipse progressed. 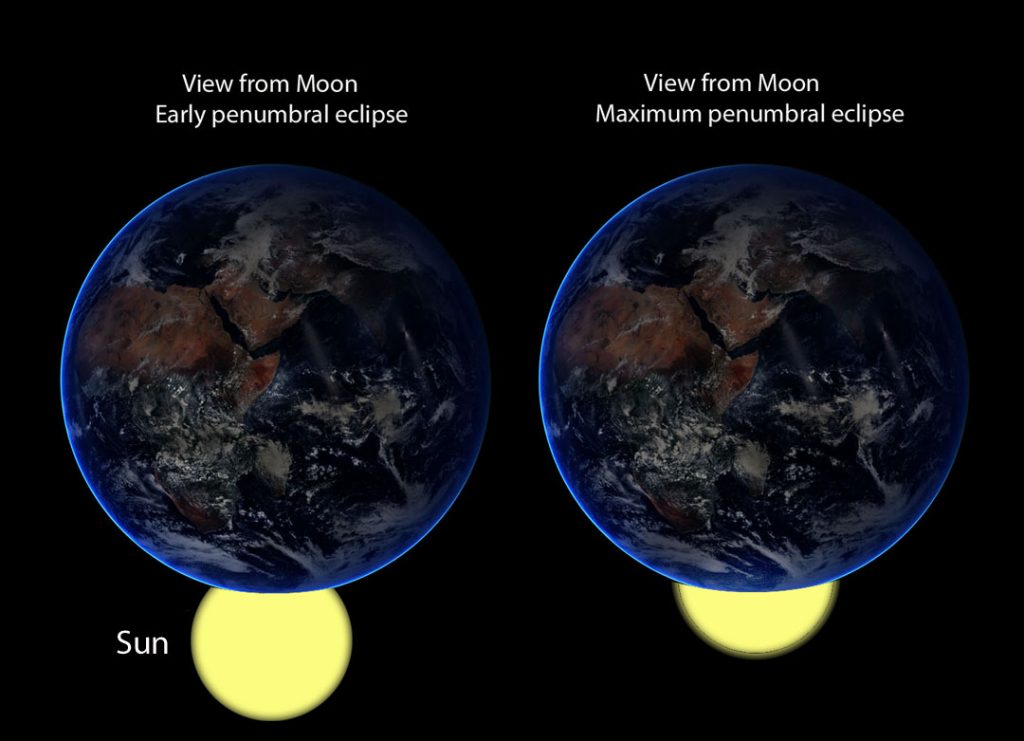 This diagram shows an approximation of the Sun’s position and size as viewed by an observer at the center of the lunar disk during Friday’s penumbral eclipse. More sunlight shines across the Moon early in the eclipse, making the penumbral shadow very pale, but by maximum (right), half the sun is covered and the Moon appears darker and duskier as seen from Earth. During a total lunar eclipse, the sun is hidden completely. Credit: Bob King with Earth image by NASA

As the Moon’s leading edge approached the penumbra-umbra border, the Sun would narrow to a glaring sliver along Earth’s limb for our lucky lunar observer. Back on Earth, we’d notice that the part of the Moon closest to the umbra looked strangely gray and dusky, but the entire lunar disk would still be plainly visible. That’s what we’ll see during Friday’s eclipse. The Moon will slide right up to the umbra and then roll by, never dipping its toes in its dark waters.

During a partial eclipse, the Moon keeps going into the umbra, where the Sun is completely blocked from view save for dash of red light refracted by the Earth’s atmosphere into what would otherwise be an inky black shadow. This eclipse, the Moon only flirts with the umbra. 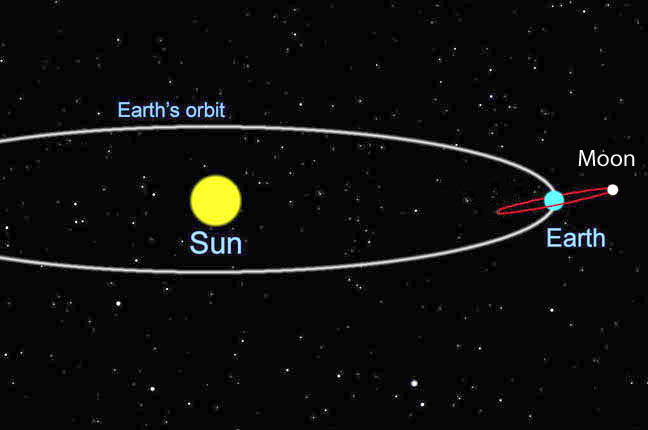 The moon’s orbit is tilted 5.1 degrees in relation to Earth’s orbit, so most Full Moons, it passes above or below the shadow and no eclipse occurs. Credit: Bob King

Because the moon’s orbit is tilted about 5° from the plane of Earth’s orbit, it rarely lines up for a perfect bullseye total eclipse: Sun – Earth – Moon in a straight line in that order. Instead, the moon typically passes a little above or below (north or south) of the small, circle-shaped shadow cast by our planet, and no eclipse occurs. Or it clips the outer edge of the shadow and we see — you guessed it — a penumbral eclipse.

Earth’s shadow varies in size depending where you are in it. Standing on the ground during twilight, it can grow to cover the entire sky, but at the moon’s distance of 239,000 miles, the combined penumbra and umbra span just 2.5° of sky or about the width of your thumb held at arm’s length. 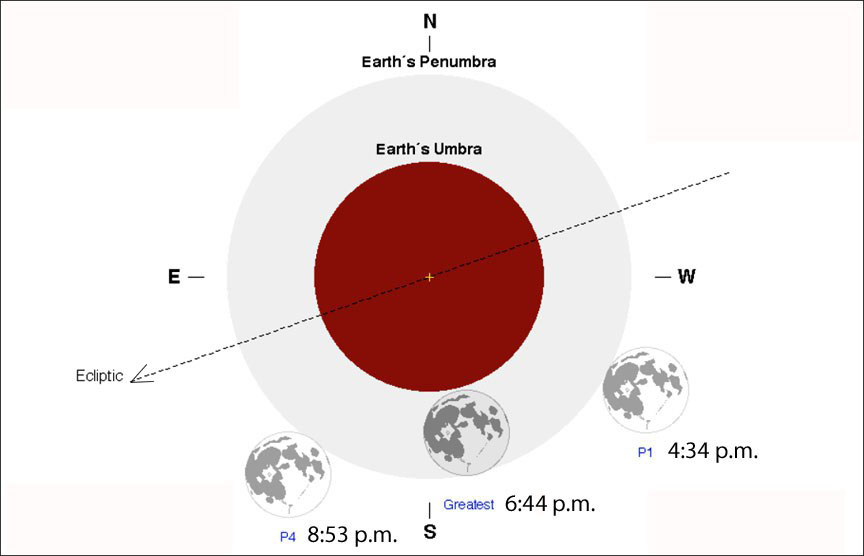 The moon passes through Earth’s outer shadow, the penumbra, on Feb. 10-11. In the umbra, the sun is blocked from view, but the outer shadow isn’t as dark because varying amounts of sunlight filter in to dilute the darkness. Times are Central Standard. Credit: F. Espenak, NASA’s GFSC with additions by the author

Because the Moon travels right up to the umbra during Friday’s eclipse, it will be well worth watching.The lower left  or eastern half of the moon will appear obviously gray and blunted especially around maximum eclipse as it rises in the eastern sky that Friday evening over North and South America. I should mention here that the event is also visible from Europe, Africa, S. America and much of Asia.

This map shows where the eclipse will be visible. Most of the U.S. will see at least part of the event. Credit: F. Espenak, NASA’s GFSC

For the U.S., the eastern half of the country gets the best views. Here are CST and UT times for the different stages. To convert from CST, add an hour for Eastern, subtract one hour for Mountain and two hours for Pacific times. UT stands for Universal Time, which is essentially the same as Greenwich or “London” Time except when Daylight Saving Time is in effect: 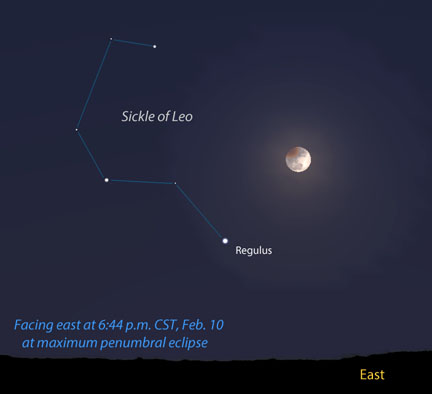 This is a simulated view of the Full Snow Moon at maximum eclipse Friday evening low in the eastern sky alongside the familiar asterism known as the Sickle of Leo. Created with Stellarium

You can see that the eclipse plays out over more than 4 hours, though I don’t expect most of us will either be able or would want to devote that much time. Instead, give it an hour or so when the Moon is maximally in shadow from 6 to 7:30 p.m. CST; 7-8:30 EST; 5-6:30 p.m. MST and around moonrise Pacific time.

This should be a fine and obvious eclipse because around the time of maximum, the darkest part of the penumbra shades the dark, mare-rich northern hemisphere of the Moon. Dark plus dark equals extra dark! Good luck and clear skies!