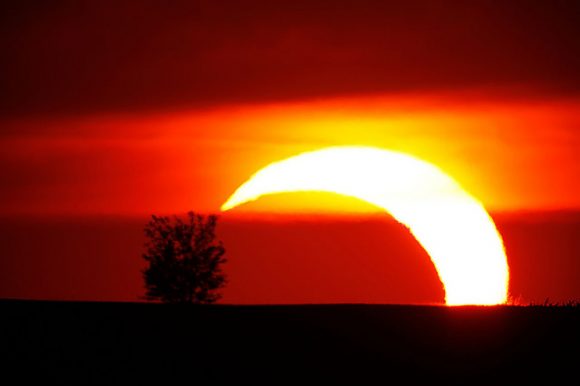 The May 2012 annular eclipse low to the horizon. Image credit and copyright: Jared Bowens.

Astronomy turns up in fascinating junctures in history. Besides just the romantic angle, we can actually pin down contextual events in ancient history if we can tie them in with a spectacle witnessed in the heavens. A recent look at the story of ‘Joshua’s eclipse’ is one such possible tale.

Lunar and solar eclipses are especially dramatic events, something that would have really made the ancients stop and take notice. A recent study published in an edition of the Beit Mikra Journal (in Hebrew) by researchers from Ben Gurion University may have pinpointed a keypoint in biblical history: the date of the Battle of Gibeon.

This study first came to our attention via the Yahoo! SEML eclipse message board and a recent Times of Israel article. The article makes mention of NASA eclipse data, which is free for anyone to peruse looking over the five millennium canon of solar and lunar eclipses… hey, its what we do for fun.

We did obtain a look at a translation of the abstract from the paper, which ends with the following:

“In the period between 1500-1000 BCE which is the relevant time for the biblical story, there were only three eclipses seen from Jerusalem, one total eclipse and two annular eclipses. We show that the most appropriate one is the annular solar eclipse that occurred on October 30 in 1207 BCE at sunset, an appropriate date for the time of conquest and the early settlement period, at the time of Marneptah’ rule in Egypt.” 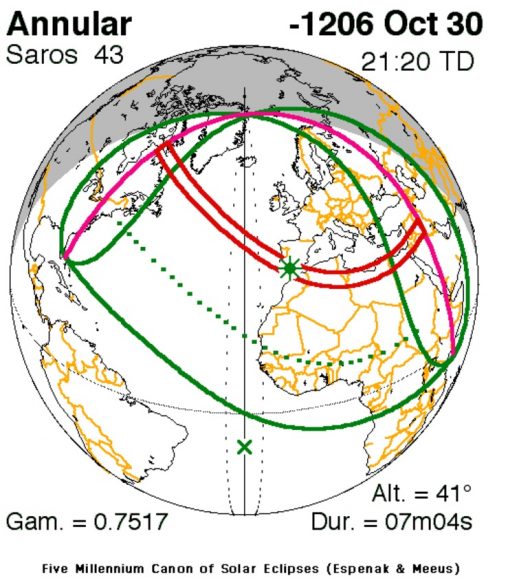 The path of the eclipse of October 30th, 1206 BC. Credit: NASA/GSFC/Espenak/Meeus.

According to tradition, Joshua commanded the Sun to stand still long enough to defeat the Canaanite kings. Of course, the Sun and the Moon still move during an eclipse be it lunar or solar, though its mostly our planet that’s doing the moving. Still, the actual biblical term “-dom” is open to interpretation, and the researchers chose the Hebrew “to become dark” instead of the King James translation of “to stand still,” or “stationary”.

If this Bible verse sounds familiar, that’s because it turns up in astronomical history again in medieval Europe, when Church proponents used it as supposed proof of geocentricism. 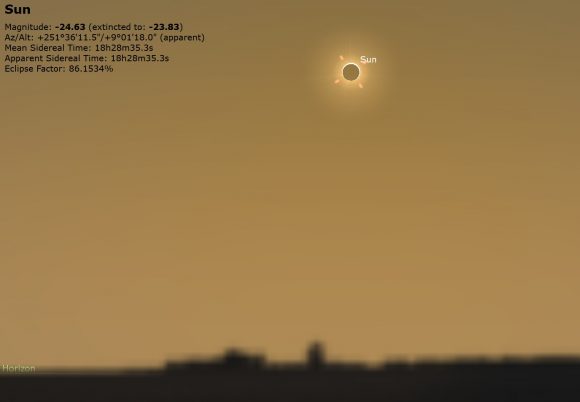 Mid-eclipse over central Israel at sunset on October 30th, 1206 BC. Credit: Stellarium.

It’s tough to predict eclipses in distant time. The rotation of the Earth is not entirely smooth, and the minute change in the length of the day (known as Delta T) accumulates to the point that a leap second must be inserted on occasion to keep observed time in sync with reckoned terrestrial time. Braking action by the Sun and Moon, tectonic activity, and even global warming all cause small changes in the Earth’s rotation that slowly build up over time. This means that it’s tough to predict eclipses more than a few thousand years out, where at best we can only judge which continent they might have or will fall on.

“Not everyone likes the idea of using physics to prove things from the Bible,” said researcher Hezi Yitzhak to the Israeli news site Haaretz. “We do not claim that everything written in the Bible is true or took place… but there is also a grain of historical truth that has archaeological evidence behind it.”

The eclipse in question occurred on October 30th, 1206 BC. This was an annular eclipse, crossing the Atlantic and the Mediterranean and ending over Israel and Jordan at sunset. Researchers pegged this suspect eclipse because of its fit for historical context and visibility. Annularity for the eclipse was 86% obscuration and started at an altitude of nine degrees above the western horizon, and would have still been in progress during its final phases at sunset. 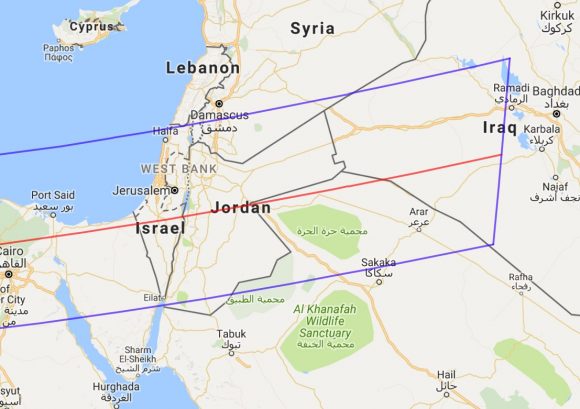 The end of the eclipse path over modern day Israel and Jordan. Credit: NASA/GSFC data.

Lots of eclipses turn up in history. A partial lunar eclipse preceded the fall of Constantinople in 1453, seeming to fulfill prophecy. Solar and lunar eclipses made a showing at lots of battles, including the Second Battle of Syracuse on August 28th, 412 BC and during the Zulu War on January 22nd, 1879. A solar eclipse on June 15th, 762 BC mentioned in Assyrian texts pinpoints a crucial time in ancient history, giving us a benchmark for later dates. It’s worth noting that prior to modern times, it seems that battles were the only thing worth writing down…

Still, it’s interesting to imagine the scene as ancient armies clash, only to stop and gaze at the wondrous sight on the horizon: a pair of glowing horns, hanging low in the pre-dusk sky. We caught the 1994 annular eclipse from the Sandusky, Ohio on the shores of Lake Erie and can attest that even a 98% eclipsed Sun is still pretty bright, giving even a clear day a deep steely blue tint. Lower to the horizon though, an annular eclipse is more readily visible to the unaided eye.

You have to be careful when attempting to read ancient texts as astronomical guide books. Great minds, including Kepler and Newton, expended lots of mental juice on attempting to link biblical accounts such as Ezekiel’s Wheel and the Star of Bethlehem with actual astronomical events. We’ll probably never know for sure if a coincidental conjunction graced the sky over the manger in Bethlehem, or if Ezekiel saw the breakup of a brilliant comet, but it’s always fun to imagine and wonder. Then, there’s the inevitable embellishment that accompanies stories that may have been first sparked by meteor showers or sundogs, centuries ago. We don’t, for example, see flaming swords or banners emblazoned with Latin inscriptions across the sky today, though if you can believe medieval accounts, they seemed common back in the day.

Though far from conclusive, the results of the study concerning Joshua’s eclipse and the battle of Gideon are interesting to consider. Most likely we’ll never truly know what happened that ancient afternoon, unless, of course, we perfect time travel. What other events remain hidden and lost to time, ready for some historical astro-sleuth to uncover them?