Juno Buzzes Jupiter a mere 4,300 Km’s above the Cloud Tops

Juno Buzzes Jupiter a mere 4,300 Km’s above the Cloud Tops 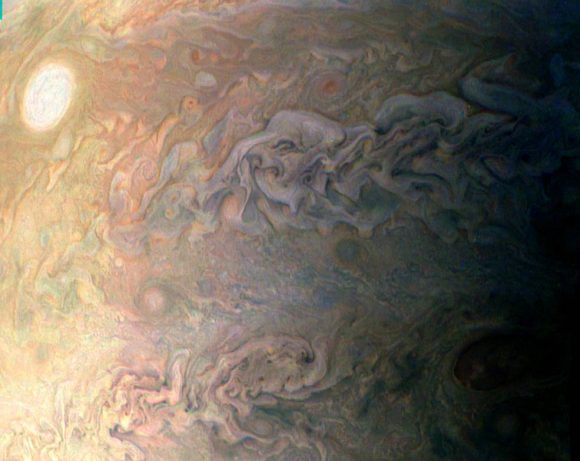 On July 4th, 2016, NASA’s Juno spacecraft made history when it became the second mission to establish orbit around Jupiter – the previous being the Galileo spacecraft, which orbited the planet from 1995 to 2003. Since that time, it has circled the massive gas giant three times, collecting data on the gas giant’s composition, interior and gravity field.

This past Thursday, February 1st, the mission conducted its fourth orbit of the planet. In the process, the spacecraft collected more vital data on the gas giant and snapped several dozen pictures. And in what is has been a first for a space mission, NASA will once again be asking the public what features they would like to see photographed during Juno’s next pass.

Juno made its closest pass (what is known as perijove) to Jupiter at precisely 1257 GMT (7:57 a.m. EST), passing the cloud tops at a distance of 4,300 km (2,670 mi) and traveling at a velocity of about 208,000 km/h (129,300 mph) relative to the gas giant. Using its suite of instruments, it scanned Jupiter’s atmosphere, gathered data on its radiation and plasma, and began returning this information to Earth.

And during this latest pass, the JunoCam snapped several dozen more pictures. During two of its three previous perijove maneuvers, this instruments captured some of the most breathtaking photographs of Jupiter’s clouds to date (like the one seen above). Once they were transmitted back to Earth and made available to the public, “citizen scientists” were able to download and process them at their leisure.

And with this latest pass complete, the public is once again being encouraged to vote on what features they want to see photographed during the next pass. As Candy Hansen, the Juno mission’s co-investigator from the Planetary Science Institute, stated shortly before Juno made its fourth perijovian maneuver:

“The pictures JunoCam can take depict a narrow swath of territory the spacecraft flies over, so the points of interest imaged can provide a great amount of detail. They play a vital role in helping the Juno science team establish what is going on in Jupiter’s atmosphere at any moment. We are looking forward to seeing what people from outside the science team think is important.”

This has all been part of a first-ever effort on behalf of NASA to get the public involved in what kinds of images are to be taken. According to NASA, this is to become a regular feature of the Juno mission, with a  new voting page being created for each upcoming flyby. The next perijovian maneuver will take place on March 27th, 2017, coinciding with the Juno spacecraft’s 53.4-day orbital period. 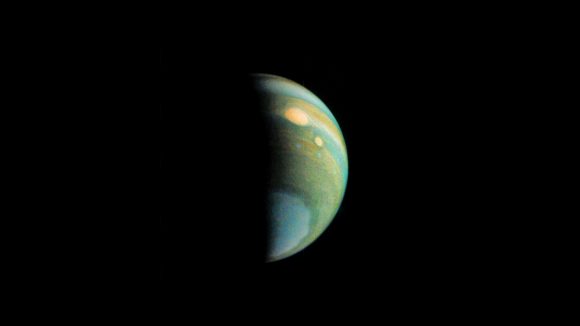 Originally, the mission planners had hoped to narrow Juno’s orbital period down to 14 days, which would have been accomplished by having the craft fire its main engine while at perijove. However, two weeks before the engine burn was scheduled to take place (Oct. 19th, 2016), ground controllers noticed a problem with two of the engine’s check valves – which are part of the spacecraft’s fuel pressurization system.

As Juno project manager Rick Nybakken said at the time:

“Telemetry indicates that two helium check valves that play an important role in the firing of the spacecraft’s main engine did not operate as expected during a command sequence that was initiated yesterday. The valves should have opened in a few seconds, but it took several minutes. We need to better understand this issue before moving forward with a burn of the main engine.”

Because of this technical issue, the mission leaders chose to postpone the engine burn so they could check the craft’s instruments to get a better understanding of why it happened. The Juno team was hoping to use the third orbit of the spacecraft to study the problem, but this was interrupted when a software performance monitor induced a reboot of the spacecraft’s onboard computer. 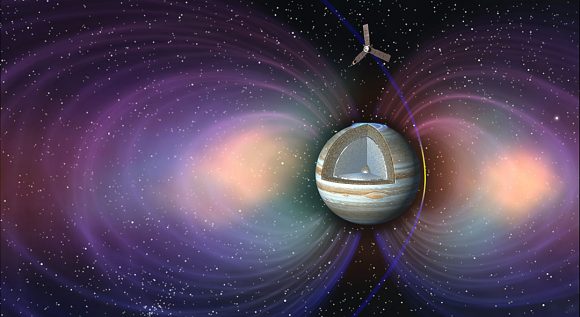 To accomplish its science objectives, Juno is orbiting Jupiter’s poles and passing very close to the planet, avoiding the most powerful (and hazardous) radiation belts in the process. Credit: NASA/JPL-Caltech

Because of this, the spacecraft went into safe mode during its third flyby, which prevented them from gathering data on the engine valve problem. On Oct. 24th, the mission controllers managed to get the craft to exit safe mode and performed a trim maneuver in preparation for its next flyby. But the mystery of why the engine valves failed to open remains, and the mission team is still unable to resolve the problem.

Thus, the decision to fire the main engine (thereby shortening its orbital period) has been postponed until they get it back online. But as Scott Bolton – the Associate Director of R&D at the Southwest Research Institute (SwRI) and Juno’s Principal Investigator – has emphasized in the past:

“It is important to note that the orbital period does not affect the quality of the science that takes place during one of Juno’s close flybys of Jupiter. The mission is very flexible that way. The data we collected during our first flyby on August 27th was a revelation, and I fully anticipate a similar result from Juno’s October 19th flyby.”

In the meantime, the Juno science team is still analyzing data from all previous Jupiter flybys. During each pass, the spacecraft and its instruments peer beneath Jupiter’s dense cloud cover to study its auroras, its magnetic field, and to learn more about the planet’s structure, composition, and formation. And with the public’s help, it is also providing some of the clearest and most detailed imagery of the gas giant to date.