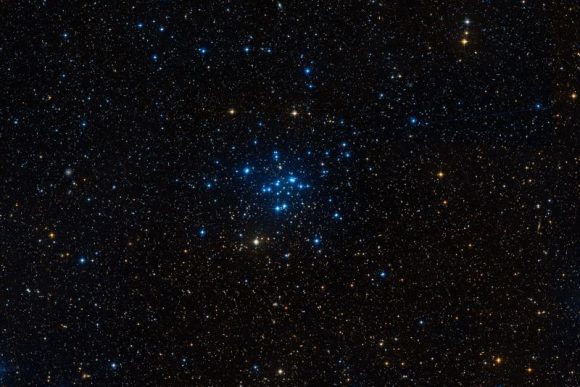 Welcome back to Messier Monday! In our ongoing tribute to the great Tammy Plotner, we take a look at the Triangulum Galaxy, also known as Messier 33. Enjoy!

During the 18th century, famed French astronomer Charles Messier noted the presence of several “nebulous objects” in the night sky. Having originally mistaken them for comets, he began compiling a list of them so that others would not make the same mistake he did. In time, this list (known as the Messier Catalog) would come to include 100 of the most fabulous objects in the night sky.

One of these objects is known as Messier 34, an open star cluster located in the northern Perseus constellation. Located at a distance of about 1,500 light years from Earth, it is one of the closest Messier objects to Earth, and is home to an estimated 400 stars. It is also bright enough to be seen with the naked eye or binoculars, where light conditions permit.

What You Are Looking At:

This cluster of stars started its journey off together through our galaxy some 180 million years ago as part of the “Local Association”… groups of stars like the Pleiades, Alpha Persei Cluster and the Delta Lyrae Cluster that share a common origin, but have become gravitationally unbound and are still moving together through space. We know the stars are related by their common movement and ages, but what else do we know about them?

Well, one thing we do know is that out of the 354 stars in the region survey, 89 of them are actual cluster members and that all six of the visual binaries and three of the four known Ap stars are members of the cluster. There’s even a giant among them! But like almost all stars out there, we know they usually aren’t singles and actually have companions. As Theodore Simon wrote in his 2000 study regarding NGC 1039 and NGC 3532:

“Roughly half the sources detected in both images have likely optical counterparts from earlier ground-based surveys. The remainder are either prospective cluster members or foreground/background stars, which can be decided only through additional photometry, spectroscopy, and proper-motion studies. There is some indication (at the 98% confidence level) that solar-type stars may lack the extreme rotation and activity levels shown by those in the much younger Pleiades and alpha Persei clusters, but a detailed assessment of the coronal X-ray properties of these clusters must await more sensitive observations in the future. If confirmed, this finding could help to rule out the possibility that stellar dynamo activity and rotational braking are controlled by a rapidly spinning central core as stars pass through this phase of evolution from the Pleiades stage to that represented by the Hyades.”

If there’s companion stars to be discovered, what else might be in the field that we just can quite “see”? Try white dwarfs. As Kate Rubin (et al.) published in the May 2008 issue of the Astronomical Journal:

“We present the first detailed photometric and spectroscopic study of the white dwarfs (WDs) in the field of the ~225 Myr old (log ?cl = 8.35) open cluster NGC 1039 (M34) as part of the ongoing Lick-Arizona White Dwarf Survey. Using wide-field UBV imaging, we photometrically select 44 WD candidates in this field. We spectroscopically identify 19 of these objects as WDs; 17 are hydrogen-atmosphere DA WDs, one is a helium-atmosphere DB WD, and one is a cool DC WD that exhibits no detectable absorption lines. Of the 17 DAs, five are at the approximate distance modulus of the cluster. Another WD with a distance modulus 0.45 mag brighter than that of the cluster could be a double-degenerate binary cluster member, but is more likely to be a field WD. We place the five single cluster member WDs in the empirical initial-final mass relation and find that three of them lie very close to the previously derived linear relation; two have WD masses significantly below the relation. These outliers may have experienced some sort of enhanced mass loss or binary evolution; however, it is quite possible that these WDs are simply interlopers from the field WD population.” 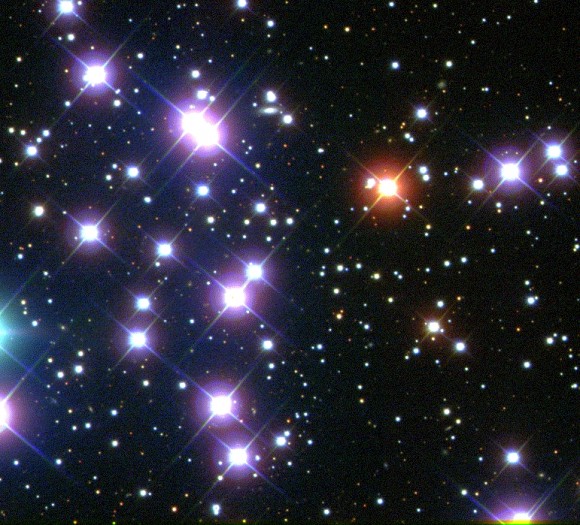 While it sounds a little confusing, it’s all about how star clusters evolve. As David Soderblom wrote in a 2001 study:

“We analyze Keck Hires observations of rotation in F, G, and K dwarf members of the open cluster M34 (NGC 1039), which is 250 Myr old, and we compare them to the Pleiades, Hyades, and NGC 6475. The upper bound to rotation seen in M34 is about a factor of two lower than for the 100 Myr-old Pleiades, but most M34 stars are well below this upper bound, and it is the overall convergence in rotation rates that is most striking. A few K dwarfs in M34 are still rapid rotators, suggesting that they have undergone core-envelope decoupling, followed by replenishment of surface angular momentum from an internal reservoir. Our comparison of rotation in these clusters indicates that the time scale for the coupling of the envelope to the core must be close to 100 Myr if decoupling does, in fact, occur.”

M34 was probably first found by Giovanni Batista Hodierna before 1654, and independently rediscovered by Charles Messier in on August 25, 1764. As he described it in his notes:

“I have determined the position of a cluster of small stars between the head of the Medusa and the left foot of Andromeda almost on the parallel of the star Gamma of that letter constellation. With an ordinary refractor of 3 feet, one distinguishes these stars; the cluster may have 15 minutes in extension. I have determined its position with regard to the star Beta in the head of the Medusa; its right ascension has been concluded at 36d 51′ 37″, and its declination as 41d 39′ 32″ north.” 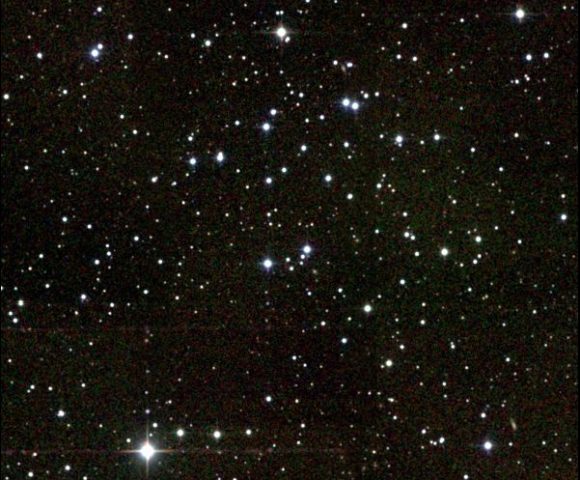 Over the years, a great many historic observers would turn a telescope its way to examine it – also looking for more. Said Sir William Herschel: “A cluster of stars; with 120, I think it is accompanied with mottled light, like stars at a distance.” Yet very little more can be seen except for the fact that most of the stars seem to be arranged in pairs – the most notable being optical double in the center – h 1123 – which was cataloged by Sir John Herschel on December 23rd, 1831.

Charles Messier discovered it independently on August 25th, 1764, and included it in the Messier Catalog. As he wrote in the first edition of the catalog:

“In the same night of [August] 25 to 26, I have determined the position of a cluster of small stars between the head of the Medusa [Algol] & the left foot of Andromeda almost on the parallel of the star Gamma of that letter constellation. With an ordinary [non-achromatic] refractor of 3 feet [FL], one distinguishes these stars; the cluster may have 15 minutes in extension. I have determined its position with regard to the star Beta in the head of the Medusa; its right ascension has been concluded at 36d 51? 37?, & its declination as 41d 39? 32? north.”

But as always, it was Admiral William Henry Smyth who described the object with the most florid prose. As he wrote in his notes when observing the cluster in October 1837, he noted the following:

“A double star in a cluster, between the right foot of Andromeda and the head of Medusa; where a line from Polaris between Epsilon Cassiopeiae and Alpha Persei to within 2deg of the parallel of Algol, will meet it. A and B, 8th magnitudes, and both white. It is in a scattered but elegant group of stars from the 8th to the 13th degree of brightness, on a dark ground, and several of them form into coarse pairs. This was first seen and registered by Messier, in 1764, as a “mass of small stars;” and in 1783 was resolved by Sir W. Herschel with a seven-foot reflector: with the 20-foot he made it “a coarse cluster of large stars of different sizes.” By the method he applied to fathom the galaxy, he concluded the profundity of this object not to exceed the 144th order.” 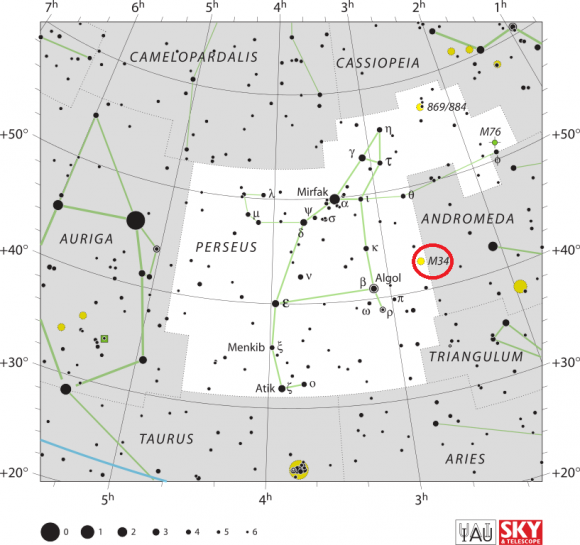 M34 is easily found in binoculars about two fields of view northwest of Algol(Beta Persei). You will know when you have found this distinctive star cluster because “X” marks the spot! In a telescope finderscope, it will appear as a faint, hazy spot and will fully resolve to most average telescopes. Messier 34 makes an excellent target for moonlit nights or light polluted areas and will stand up well to less than perfect sky conditions.

It can even be seen unaided from ideal locations! Enjoy your observations!

And as always, we’ve included the quick facts on this Messier Object to help you get started:

We have written many interesting articles about Messier Objects here at Universe Today. Here’s Tammy Plotner’s Introduction to the Messier Objects, , M1 – The Crab Nebula, M8 – The Lagoon Nebula, and David Dickison’s articles on the 2013 and 2014 Messier Marathons.

Be to sure to check out our complete Messier Catalog. And for more information, check out the SEDS Messier Database.