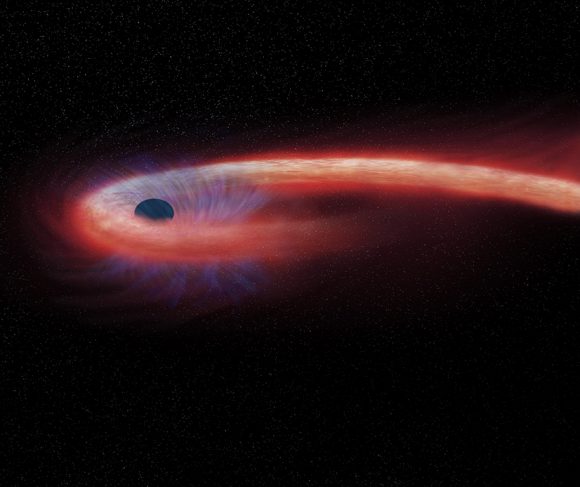 Does a distant black hole provide a new definition of pain and suffering?

The black hole, named XJ1500+0154, appears to be the real-life equivalent of the Pit of Carkoon, the nesting place of the all-powerful Sarlacc in Star Wars, which slowly digested its victims.

Over ten years ago, this giant black hole ripped apart a star and has since continued a very long lunch, feasting on the stars’ remains. Astronomers have been carefully monitoring this slow ‘digestion,’ because it is so unusual for what are called tidal disruption events (TDEs), where tidal forces from black holes tear stars apart.

“We have witnessed a star’s spectacular and prolonged demise,” said Dacheng Lin from the University of New Hampshire in Durham, New Hampshire, who led the observations of this event. “Dozens of tidal disruption events have been detected since the 1990s, but none that remained bright for nearly as long as this one.”

This artist’s illustration depicts what astronomers call a “tidal disruption event,” or TDE, when an object such as a star wanders too close to a black hole and is destroyed by tidal forces generated from the black hole’s intense gravitational forces. (Credit: NASA/CXC/M.Weiss.

This decade-long feast has gone on ten times longer than any other observed TDE.

XJ1500+0154 is located in a small galaxy about 1.8 billion light years from Earth, and three telescopes have been monitoring this X-ray event: the Chandra X-ray Observatory, the Swift satellite, and the XMM-Newton.

TDEs are different from another, more common black-hole related source of X-rays in the galaxy, active galactic nuclei (AGN). Like the digestion of the Sarlacc, AGNs really can last for thousands of years. These are supermassive black holes at the center of galaxies that pull in surrounding gas and “emit copious amounts of radiation, including X-rays,” explained Lin in a blog post on the Chandra website. “Radiation from AGNs do not vary a lot because the gas surrounding them extends over a large scale and can last for tens of thousands of years.”

In contrast, TDEs are relatively short-lived, lasting only a few months. During a TDE, some of the stellar debris is flung outward at high speeds, while the rest falls toward the black hole. As it travels inwards to be consumed by the black hole, the material heats up to millions of degrees, generating a distinct X-ray flare.

XJ1500+0154 has provided an extraordinarily long, bright phase, spanning over ten years. Lin and his team said one explanation could be the most massive star ever to be completely torn apart during a TDE.

“To have the event last so long at such high luminosity requires full disruption of a relatively massive star, about twice the mass of the sun,” Lin wrote; however, “disruption of such massive stars by the SMBH is very unlikely because stars this massive are rare in most galaxies, unless the galaxy is young and actively forming stars, as in our case.

So, another more likely explanation is that this is the first TDE observed where a smaller star was completely torn apart. 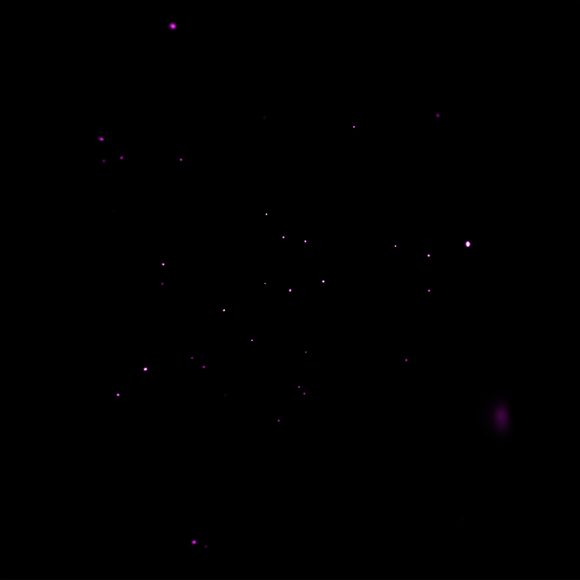 An X-ray image of the full field of view by of the region where the ‘tidal disruption event’ is taking place. The purple smudge in the lower right shows the disruption from the black hole XJ1500+0154. Credit: X-ray: NASA/CXC/UNH/D.Lin et al.

“To fully explain the super-long duration of our event requires the application of recent theoretical progress on the study of TDEs,” he wrote. “In the last two years, several groups independently found that it can take a long time after the disruption of the star for the stellar debris to settle onto the accretion disk and into the SMBH. Therefore, the event can evolve much more slowly than previously thought.”

Additionally, the X-ray data also indicate that radiation from material surrounding this black hole has consistently surpassed what is called the Eddington limit, which is defined as a balance between the outward pressure of radiation from the hot gas and the inward pull of the gravity of the black hole.

Seeing evidence of such rapid growth may help astronomers understand how supermassive black holes were able to reach masses about a billion times higher than the sun when the universe was only about a billion years old.

“This event shows that black holes really can grow at extraordinarily high rates,” said co-author Stefanie Komossa of QianNan Normal University for Nationalities in Duyun City, China. “This may help understand how precocious black holes came to be.”

Lin and his team will continue to monitor this event, and they expect the X-ray brightness to fade over the next few years, meaning the supply of ‘food’ for this long lunch will soon be consumed.