Ever since the European Southern Observatory (ESO) announced that they had discovered an exoplanet in the nearby system of Proxima Centauri, there have been a lot of questions about this exoplanet. In addition to whether or not this planet could actually support life, astronomers have also been eager to see of its companion stars – Alpha Centauri A and B – have exoplanets too.

Prior to the discovery of Proxima b, Alpha Centauri was thought to host the closest exoplanets to Earth (Alpha Bb and Bc). However, time has cast doubt on the existence of the first, while the second’s existence remains unconfirmed. But thanks to a recent agreement between the ESO and Breakthrough Initiatives, we may yet find out if there are exoplanets in Alpha Centauri – which will come in handy when it comes time to explore there!

In accordance with this agreement, Breakthrough Initiatives will provide additional funds so that the ESO’s Very Large Telescope (VLT), located at the La Silla Paranal Observatory in Chile, can be modified to conduct a special search program of Alpha Centauri. This will involve upgrading the VLT Imager and Spectrometer for mid-Infrared (VISIR) instrument with new equipment that will enhance its planet-hunting abilities.

This includes a new instrument module that will allow the VLT to use a technique known as coronagraphy – a form of adaptive optics that corrects for a star’s brightness, thus making it easier for a telescope to spot the thermal glow of orbiting planets around them. While the Breakthrough Prize Foundation will pay a large fraction of the upgrade costs, the ESO will be making the VLT and its staff available to conduct the survey – which is scheduled for 2019.

Such an agreement is truly a win-win scenario. For the ESO, this will not only improve the VLT’s imaging abilities, but will also assist with the development of the European Extremely Large Telescope (E-ELT). This proposed array, which is scheduled for completion by 2024, will rely on the Mid-infrared E-ELT Imager and Spectrograph (METIS) instrument to hunt for potentially habitable exoplanets.

Any lessons learned from the upgrade of VISIR will allow them to develop the necessary expertise to run METIS, and will also allow them to test the effectiveness of the technology beforehand. For Breakthrough Initiatives, determining if there are any planets in the Alpha Centauri system will go a long way towards helping them mount their historic mission to this star.

In the coming years, Breakthrough Initiatives hopes to mount the first interstellar voyage in history using a lightsail and nanocraft that would rely on lasers to push it up to relativistic speeds (20% the speed of light). Known as Breakthrough Starshot, this craft could be ready to launch in a few years time, and would reach Alpha Centauri in just 20 years time. 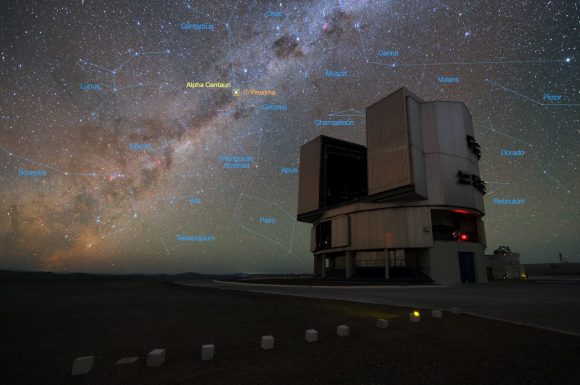 The ESO’s Very Large Telescope (VLT) at the Paranal Observatory in Chile and a stellar backdrop showing the location of Alpha Centauri. Credit: ESO

Once there, the nanocraft (using a series of microsensors) would relay information back to Earth about the Alpha Centauri system – which would include any information on its system of planets, and whether or not they are habitable. Hence, determining if there’s anything there to study in the first place will help lay the groundwork for the mission.

As Professor Avi Loeb – the Frank B. Baird, Jr. Professor of Science at Harvard and a member of the Breakthrough Starshot Advisory Committee – told Universe Today via email:

“We hope that the partnership between the Breakthrough Prize Foundation and ESO will lead to the discovery of new habitable planets around the nearest stars. Once discovered, we could search for the molecular signatures of life in the atmosphere of these planets, and potentially even send a spacecraft that will reach them within our lifetime. The latter is the driver for the Starshot Initiative. The discovery of habitable nearby planets will provide us with targets for photography by gram-scale spacecrafts, launched at a fraction of the speed of light and  equipped with cameras. For example, we would like to find out whether such planets are covered by blue oceans, green vegetation or yellow deserts.”

It’s one of the hallmarks of the new space age: a private and public organization coming together for the sake of mutual benefit. But when those benefits include advancing scientific research, space exploration, and the hunt for habitable planets other than our own, it truly is a win-win situation!

In the meantime, enjoy this video provided by ESO about their new partnership with Breakthrough Initiatives:

The post A “Breakthrough” to Search for Planets in Closest Star System to Earth appeared first on Universe Today.

2017-01-12
Previous Post: Finally, An Explanation for the Alien Megastructure?
Next Post: Land On Titan With Huygens in Beautiful New Video