Finally, An Explanation for the Alien Megastructure?

Finally, An Explanation for the Alien Megastructure? 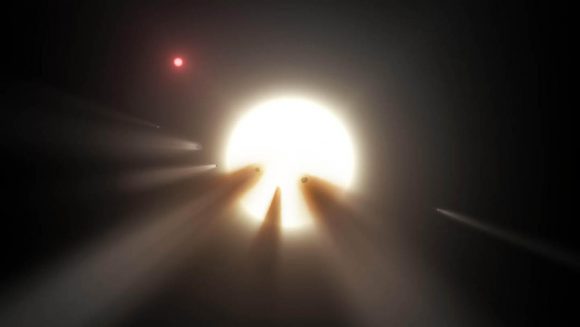 Back in October of 2015, astronomers shook the world when they reported how the Kepler mission had noticed a strange and sudden drop in brightness coming from KIC 8462852 (aka. Tabby’s Star). This was followed by additional studies that showed how the star appeared to be consistently dimming over time. All of this led to a flurry of speculation, with possibilities ranging from large asteroids and a debris disc to an alien megastructure.

But in what may be the greatest explanation yet, a team of researchers from Columbia University have suggested that the star’s strange flickering could be the result of a planet it consumed at some point in the past. This would have resulted in a big outburst of brightness from which the star is now recovering; and the remains of this planet could be transiting in front of the star, thus causing periodic drops.

For the sake of their study – titled “Secular dimming of KIC 8462852 following its consumption of a planet“, which is scheduled to appear in the Monthly Notices of the Royal Astronomical Society – the team took the initial Kepler findings, which showed sudden drops of 15% and 22% in brightness. They then considered subsequent studies that took a look at the long-term behavior of Tabby’s Star (both of which were published in 2016).

Artist’s impression of an orbiting swarm of dusty comet fragments around Tabby’s Star. Could these be responsible for its peculiar dips in brightness or is there a biological reason?  A small red dwarf star (above, left) lies near Tabby’s. Credit: NASA/JPL-Caltech

The first study, conducted by Bradley Schaefer of Louisiana State University, showed a decrease of 14% between the years of 1890 and 1989. The second study, conducted by Ben Monet and Joshua Simon (of Caltech and the Carnegie Institution of Washington, respectively), showed how the star faded by 3% over the course of the four years that Kepler continuously viewed it.

They then attempted to explain this behavior using the Kozai Mechanism (aka. Kozai Effect, Lidov-Kozai mechanism), which is a long-standing method in astronomy for calculating the orbits of planets based on their eccentricity and inclination. Applied to KIC 8462852, they determined that the star likely consumed a planet (or planets) in the past, likely around 10,000 years ago.

This process would have caused a temporary brightening from which the star is now returning to normal (thus explaining the long term trend). They further determined that the periodic drops in brightness could be caused by the remnants of this planet passing in high-eccentricity orbits in front of the star, thus accounting for the sudden changes.

Their calculations also put mass constraints on the planet (or planets) consumed. By their estimates, it was either a single Jupiter-sized planet, or a large number of smaller objects – such as moon-mass bodies that were about 1 km in diameter. This latter possibility seems more inviting, since a large number of objects would have produced a field of debris that would be more consistent with the dimming rate observed by previous studies. 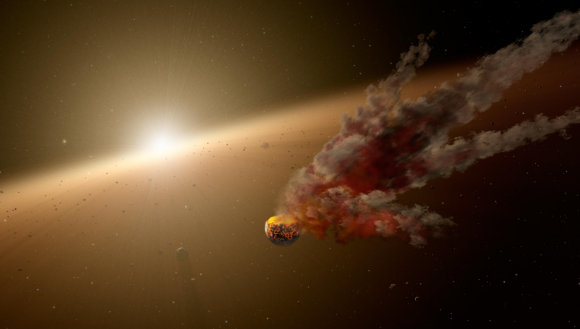 Artist’s concept of KIC 8462852, which has experienced unusual changes in luminosity over the past few years. Credit: NASA, JPL-Caltech

These results are not only the best explanation of this star’s strange behavior, they could have serious implications for the study of stellar evolution – in which stars gobble up some of their planets over time. As Brian D. Metzger, an assistant professor from the Columbia Astrophysics Laboratory and the lead author on the paper, explained in an interview with New Scientist:

“We estimated that if Tabby’s star were representative, something like 10 Jupiters would have to fall into a typical star over its lifetime, or maybe even more… These transits only last a few days, so when we see one, we have to alert all the telescopes and basically point every telescope we have at Tabby’s star.”

No doubt, the mystery of Tabby’s star will endure for some time to come. We can only hope that with ongoing observation, we might sort out exactly what is taking place in this far-flung system. But for the time being, the possibility that what are we seeing is the star returning to its normal state, and being occasionally dimmed by transiting pieces of debris, is the most plausible explanation yet.

Suffice it to say, the alien megastructure enthusiasts will likely be taking this latest study with a grain of salt! You have to admit, a megastructures is a VERY enticing possibility!

The post Finally, An Explanation for the Alien Megastructure? appeared first on Universe Today.

2017-01-11
Previous Post: What is the International Space Station?
Next Post: A “Breakthrough” to Search for Planets in Closest Star System to Earth