Welcome back to Constellation Friday! Today, in honor of the late and great Tammy Plotner, we will be dealing with the “Sea Goat” – aka. Capricornus!

In the 2nd century CE, Greek-Egyptian astronomer Claudius Ptolemaeus (aka. Ptolemy) compiled a list of all the then-known 48 constellations. This treatise, known as the Almagest, would used by medieval European and Islamic scholars for over a thousand years to come, effectively becoming astrological and astronomical canon until the early Modern Age.

The name Capricornus is derived from Latin, which translates to “goat horn” or “horns of the goat”.  This arises from the fact that representations dating back to the Middle Bronze Age consistently depict the constellation as a hybrid of a goat and fish. This may be due to the fact that at that time, the northern hemisphere’s Winter Solstice occurred while the sun was in Capricorn.

The concern for the Sun’s rebirth might have rendered astronomical and astrological observation of this region of space very important. For the same reason, the Sun’s most southerly position, which is attained at the northern hemisphere’s winter solstice, is now called the Tropic of Capricorn, a term which also applies to the line on Earth where the Sun is directly overhead at noon on that solstice.

The earliest recorded evidence of this constellation is dated to the 21st century BCE, where the “Sea Goat” was depicted on a Sumerian cylinder-seal. In the Babylonian star catalogues, which are dated to ca. 1000 BCE, Capricornus was named suhurmašu (“The Goat Fish”). The constellation would later become the symbol of Ea (Enki) and was associated with the winter solstice.

In Greek mythology, the constellation was sometimes identified as Amalthea, the goat that suckled Zeus after Rhea saved him from Cronos. The goat’s broken horn was transformed into the cornucopia or horn of plenty, and ancient sources claim that this derives from the sun “taking nourishment” while in the constellation, in preparation for its climb back northward.

However, the constellation is often depicted as a sea-goat (i.e. a goat with a fish’s tail). One myth that deals with this says that when the goat-god Pan was attacked by the monster Typhon, he dived into the Nile. The parts of him that were above the water remained a goat, but those under the water transformed into a fish. 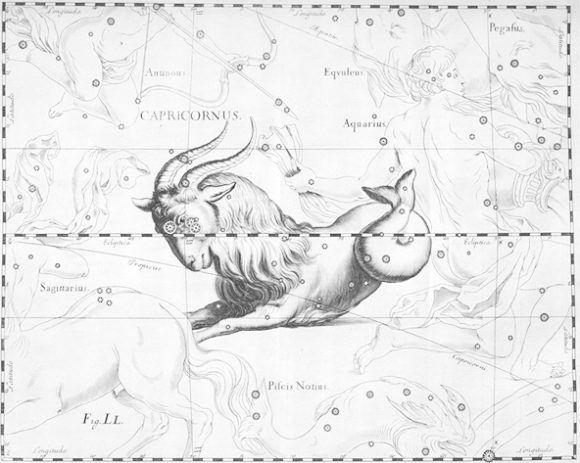 The Greeks regarded the constellation area with an alternative interpretation, namely the Augean Stable – a stable full uncleanliness – representing the concept of sin accumulated during the year. The Aquarius constellation, who was said to have poured out a river, then represent the yearly cleaning rains, associating to one of The Twelve Labors of Hercules.

For example, in Chinese astronomy, Capriconus lies in The Black Tortoise of the North, one of the four symbols of the Chinese constellations. In 1922, Capricornus included in the list of 88 modern constellations recognized by the International Astronomical Union. 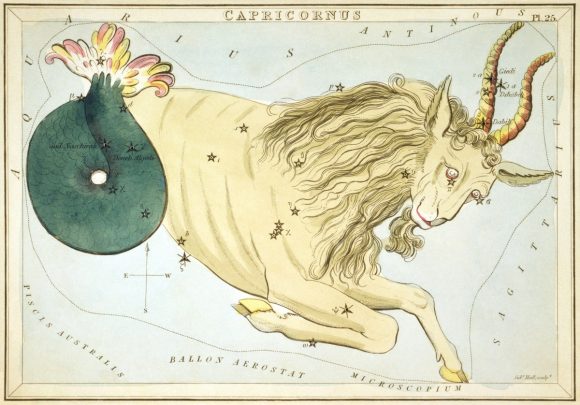 Capricornus as a sea-goat, from Urania’s Mirror (1825). Credit: US Library of Congress/
Sidney Hall

In terms of stars few bright stars or Deep Sky Objects. It’s brightest star is also not its primary, but Delta Capricorni. Also known as its traditional names Deneb Algedi and Sheddi (from the Arabic danab al-jady, “the tail of the goat”), this magnitude 2.85 star is actually a four-star system located approximately 39 light years from Earth. Its brightest star (Delta Capricorni A) being a white giant with a luminosity 8.5 times that of the Sun.

It’s second brightest star, Beta Capricorni, is also known by the traditional name Dabih – which comes from the Arabic al-dhibii (which means “the butcher”). Located 328 light years way, this star system consists of Dabih Major (Beta-1) and Dabih Minor (Beta-2); both of which is actually composed of multiple stars – Beta-1 is composed of a three stars while Beta-2 is a double star.

The only Deep Sky Object associated with this constellation is Messier 30, a globular cluster located approximately 28,000 light years from Earth. This cluster is currently approaching us at a speed of about 180 km per second, and was one of the first Deep Sky Objects discovered by Charles Messier in 1764 (and included in The Messier Catalog). 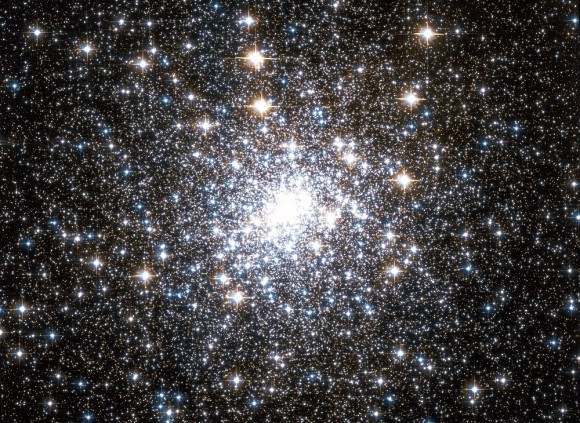 The constellation is located in an area of sky called the Sea or Water, consisting of many watery constellations such as Aquarius, Pisces, and Eridanus. For binocular observers, the best place to start is to the northwestern corner first to find Alpha Capricorni. This is an absolutely beautiful optical double star that goes by the traditional name of Algiedi. The more western of the pair is Alpha¹ Capricorni, or Prima Giedi.

For even more fun, aim your telescope all the way across the constellation at the northeastern corner for Delta Capricorni. Now you’re in for a real treat because Deneb Algedi is a a quaternary star system. Located 39 light years away, Delta Capricorni A, is classified a white giant star of the spectral type “A”. The system is a spectroscopic binary whose two components are of magnitude +3.2 and +5.2, and separated by 0.0018 arc seconds.

Now go back to binoculars and hop one bright star west to take a look at Gamma Capricorni. Nashira, or “the bearer of good news” is one of those really cool stars right on the ecliptic that’s often occulted by the Moon. Gamma Capricorni is also a blue-white A-type (A7III) giant star with a mean apparent magnitude of +3.69. It is approximately 139 light years from Earth.

It is classified as an Alpha2 Canum Venaticorum type variable star and its brightness varies by 0.03 magnitudes. Now, go right in the center for Theta. It’s name is Dorsum – the Latin word for “Back”. Theta Capricorni is a white A-type main sequence dwarf with an apparent magnitude of +4.08. It is approximately 158 light years from our solar system. Want more viewing opportunities? Then go back west with binoculars and look at Beta.

Now, keep your binoculars handy and use the chart to help you located Messier 30. This one is rather hard to see in binoculars. But with a telescope, its stars can be resolved. It’s brightest red giant stars are about of apparent visual magnitude 12.1, its horizontal branch giants at magnitude 15.1. Only about 12 variable stars have been found in this globular cluster.

The core of M30 exhibits an extremely dense stellar population, and has undergone a core collapse. Despite its compressed core, close encounters of the member stars of globular cluster M30 seem to have occurred comparatively rare, as it appears to contain only few X-ray binary stars. 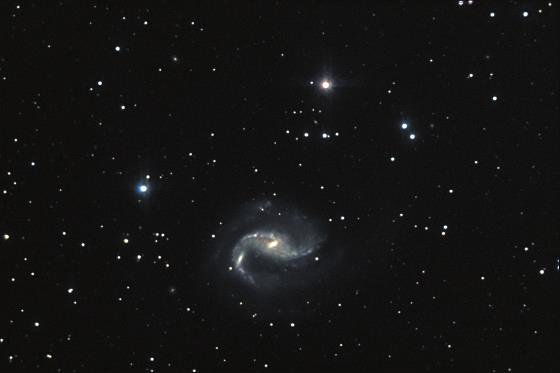 The NGC 6907 spiral galaxy, located in the direction of the Capricornus constellation. Credit: NOAO/KPNO

At slightly fainter than magnitude 11, this classy spiral galaxy shows some nice arm structure to even mid-sized telescopes. Why? Because it is doing a little galaxy interaction with background lenticular galaxy NGC 6908. This pair of spirals is engaging in some galaxy cannibalism! This act has caused some nice supernovae events within recent history and makes for some great observing – as well as astro-imaging opportunities!

The constellation of Capricornus also has a meteor shower associated with it. The Capricornid meteor stream peaks on or about July 30 and is active about a week before and after that date. The average fall rate is about 10 to 30 per hour and it is know to produce bolides.

We have written many interesting articles about the constellation here at Universe Today. Here is What Are The Constellations?, What Is The Zodiac?, and Zodiac Signs And Their Dates.

Be sure to check out The Messier Catalog while you’re at it!

For more information, check out the IAUs list of Constellations, and the Students for the Exploration and Development of Space page on Canes Venatici and Constellation Families.

The post The Constellation Capricornus appeared first on Universe Today.