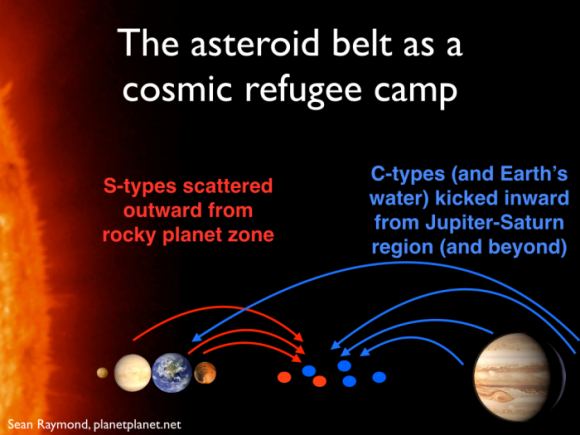 Between the orbits of Mars and Jupiter lies a disk of rocks, small bodies and planetoids known as the Main Asteroid Belt. The existence of this Belt was first theorized in the 18th century, based on observations that indicated a regular pattern in the orbits of Solar planets. By the following century, regular discoveries began to be made in the space between Mars and Jupiter, prompting astronomers to theorize where the Belt came from.

For a long time, scientists debated whether the Belt was the remains of a planet that broke up, or remnants left over from the early system that failed to become a planet. But a new study by a pair of astronomers from the University of Bordeaux has offered a different take. According to their theory, the Asteroid Belt began as an empty space which was gradually filled by rocks and debris over time.

For the sake of their study – which recently appeared in the journal Science Advances under the title “The Empty Primordial Asteroid Belt” – astronomers Sean N. Raymond and Andre Izidoro of the University of Bordeaux considered the current scientific consensus, which is that the Main Belt was once much more densely packed and became depleted of mass over time.

Artist’s impression of how the Asteroid Belt could have become filled with C-type and S-type asteroids over time. Credit: Sean Raymond/planetplanet.net

As Dr. Raymond explained to Universe Today via email:

“The standard picture is that the building blocks of the Solar System — what we call planetesimals, generally thought of as 10-100 km-scale bodies — started off in a smooth distribution across the Sun’s planet-forming disk. The problem is, that puts a couple of times Earth’s mass in the asteroid belt, where there is now less than a thousandth of an Earth mass. The challenge in this picture is therefore to understand how the belt lost 99.9% of its mass (but not 100%).”

To this, Dr. Raymond and Dr. Izodoro considered the alternate possibility that perhaps the primordial belt started as an empty space. In accordance with this theory, there were no planetesimals – i.e. Ceres, Vesta, Palla, and Hygeia – orbiting between Mars and Jupiter as there are today. This began as a thought experiment which, as Dr. Raymond admits, sounded a bit crazy at first.

However, he and Dr. Izodoro soon realized that several protoplanetary disks like the one they were envisioning had already been discovered in other star systems. For example, in 2014, the Atacama Large Millimeter/submillimeter Array in Chile photographed a planet-forming disk of dust and gas (aka, a protoplanetary disk) in the HL Tauri system, a very young star located about 450 light years away in the Taurus constellation.

As the image (shown below) revealed, the dust in this disk is not smooth, but consists of several broad regions and less dense regions. “The exact explanation for the structure in this disk is still debated but pretty much all models invoke drifting dust,” said Raymond. “And planetesimals form when drifting dust piles up into sufficiently-dense rings. So, dust rings should (we think) produce rings of planetesimals.” 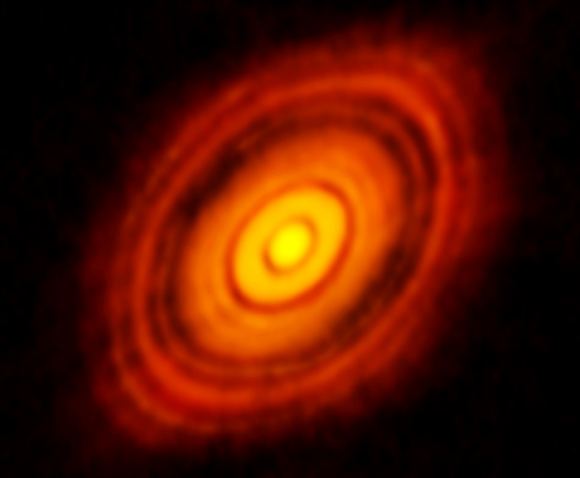 To test this hypothesis, they constructed a model of the early Solar System which included an empty Main Belt region. As they moved the simulation forward, they found that the formation of the disk was related to the formation of the rocky planets, and would gradually become what we see today. As Palmer indicated:

“What we found is that the growth of the rocky planets is not 100% efficient. A fraction of planetesimals is gravitationally kicked outward and stranded in the asteroid belt. The orbits of captured bodies matches closely those of S-type asteroids. The efficiency of implanting S-types in the belt is quite low, only about 1 in 1000.  However, recall that the belt is almost empty.  There is a total of about 4 hundred-thousandths of an Earth-mass in S-types in the present-day belt.  Our simulations typically implanted a few times that amount. Given that some are lost during later evolution of the Solar System, this matches both the distribution and amount of S-type asteroids in the belt.

They then combined this model with previous work which looked at the growth of Jupiter and Saturn and how this would effect the Solar System. In this study, they showed the C-type asteroids would be deposited in the Belt over time, and that these asteroids would also be responsible for delivering water to Earth. When they combined the distribution of implanted C-type and S-type asteroids with their current work, they found that it matched the present-day distribution of asteroids.

Interestingly enough, this is not the first theory Raymond and Izodoro have come up with to address the Asteroid Belt’s missing mass. Back in 2011, Raymond was a co-author on the study that proposed the Grand Tack model, in which he and his colleagues proposed that Jupiter migrated from its original orbit after it formed. At first, the planet moved closer to Mars’ current orbit, then back out towards where it is today. 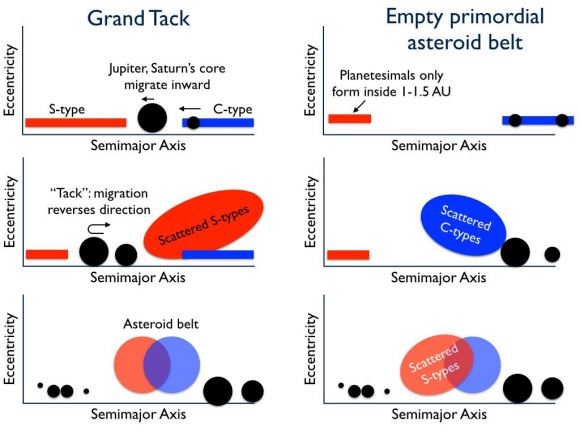 In the process, the asteroid belt would have been cleared, and Mars would have been deprived of mass, thus leading to its diminutive size – relative to Earth and Venus. This resolved a key problem with classical theories of Asteroid Belt formation, which was known as the “small Mars problem”. In short, all previous simulations of Solar planet formation tended to produce Mars analogs that were far more massive than Mars is today.

However, the Grand Tack hypothesis still contained theoretical uncertainties, which prompted Raymond and Izodoro to consider the the Empty Primordial Belt theory. “Our new result lends credence to an alternate model in which planetesimals never formed in the asteroid belt at all,” he said. “Different pieces of this new alternative model have been developed in recent years, and I think they add up to make a solid alternative to the Grand Tack model.”

Looking ahead, Raymond says that he and Izodoro hope to conduct further studies and simulations to see if either theory can be confirmed or falsified. “That’s the next step,” he said. “Until the next (seemingly-)crazy idea!”