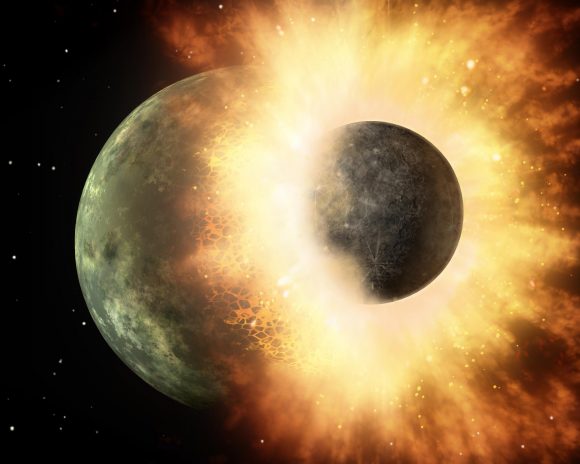 The Hubble Space Telescope is a workhorse which, despite its advanced years, keeps on producing valuable scientific data. In addition to determining the rate at which the Universe is expanding, spotting very distant galaxies, and probing the early history of the Universe, it has also observed some truly interesting things happening in nearby star systems.

For example, Hubble recently spotted some unusual activity in HD 172555, a star system located about 95 light-years from Earth. Here, Hubble obtained spectral information that indicated the presence of comets that appeared to be falling into the star. This could prove useful to scientists who are looking to understand how comets behaved during the early history of the Solar System.

These findings were presented at the 229th Meeting of the American Astronomical Society (AAS), which has been taking place this past week in Grapevine, Texas. During the course of the presentation, Dr. Carol Grady of Eureka Scientific Inc. and NASA’s Goddard Space Flight Center, shared Hubble data that hinted at the presence of infalling comets, a finding which could bolster theories about what is known as “gravitational stirring”.

Artist’s concept of a collision that is believed to have taken place in the HD 172555 star system between a moon-sized object and a Mercury-sized planet. Credit: NASA/JPL-Caltech

Basically, this theory states that the presence of a Jupiter-size planet in a star system will lead to comets being deflected by its massive gravity, thus sending them into the star. This phenomena is associated with younger stars, and is believed to have taken place in our own Solar System billions of years ago – which also led to number of comets being diverted towards Earth.

The detection of infalling comets in this system (and the way it bolsters the theory of gravitational stirring) is of imminence significant, since it is believed that it was this very mechanism that transported water to Earth when it was quite young. By observing how comets behave around young stars like HD 172555, which is estimated to be around 40 million years old, astronomers are able to see just how this mechanism could work.

As Carol Grady explained in a Hubble press release:

“Seeing these sun-grazing comets in our solar system and in three extrasolar systems means that this activity may be common in young star systems. This activity at its peak represents a star’s active teenage years. Watching these events gives us insight into what probably went on in the early days of our solar system, when comets were pelting the inner solar system bodies, including Earth. In fact, these star-grazing comets may make life possible, because they carry water and other life-forming elements, such as carbon, to terrestrial planets.”

And while exocomets are far too small to be observed directly, the research team – which included members from the European Space Agency, the Kapteyn Institute, NASA Goddard Space Flight Center, and the University of Colorado – were able to discern their presence in 2015 using data obtained by Hubble’s Space Telescope Imaging Spectrograph (STIS) and the Cosmic Origins Spectrograph (COS). 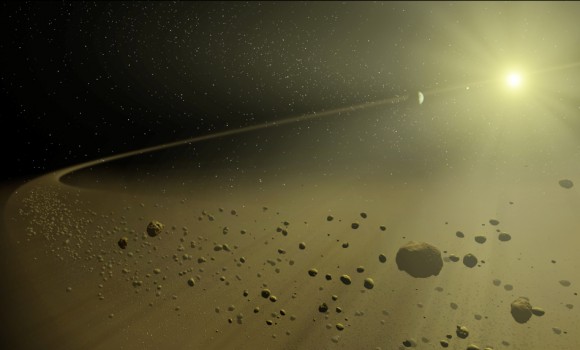 Artist’s concept of circumstellar disk of debris, which the HD 172555 star system is known to have. Credit: NASA

Over the course of six days of observation, Hubble’s instruments detected silicon and carbon gas in the ultraviolet wavelength. The source of these gases also appeared to be moving at a speed of over 579,360 km (360,000 mph) across the face of the star. The only viable explanation for this was that they were spotting trails of gas as they evaporated from comets as they made their way across the system’s debris disk and closer to the star.

This is not the first time that exocomets have been seen transiting HD 172555. In 2004 and 2011, similar detections were made by the European Southern Observatory’s High Accuracy Radial velocity Planet Searcher (HARPS) spectrograph. On those occasions, HARPS detected spectra that indicated the presence of calcium, which was seen as evidence that comet-like objects were falling into the star.

Dr. Grady and her team followed up on this by conducting their own spectral analysis of the system. By viewing HD 172555 and its debris disk in ultraviolet light, they were able to discern the presence of silicon and carbon. This was made easier thanks to the fact that HD 172555’s debris disk is viewed close to edge-on, which gives the telescope a clear view of any comet activity taking place within it.

Dr. Grady admits that there are still some uncertainties with their study. For instance, it is not entirely clear whether the objects they observed were comets or asteroids. Though the behavior is consistent with comets, more data on their particular compositions will be needed before they can be sure.

But in the meantime, it is compelling evidence for how comets behaved during the early history of the Solar System. And it may lend weight to the debate about how water originated on Earth, which is also central to determining how and where life may emerge in other parts of the Universe.