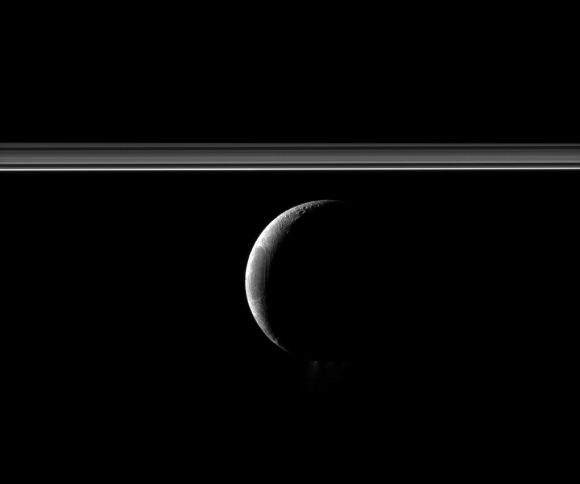 During its long mission to Saturn, the Cassini spacecraft has given us image after spectacular image of Saturn, its rings, and Saturn’s moons. The images of Saturn’s moon Enceladus are of particular interest when it comes to the search for life.

At first glance, Enceladus appears similar to other icy moons in our Solar System. But Cassini has shown us that Enceladus could be a cradle for extra-terrestrial life.

Though Enceladus looks every bit like a frozen, lifeless world on its surface, it’s what lies beneath its frigid crust that is exciting. Enceladus appears to have a subsurface ocean, at least in it’s south polar region. And that ocean may be up to 10 km. deep.

Before we dive into that, (sorry), here are a few basic facts about Enceladus:

In 2005, Cassini first spied plumes of frozen water vapor erupting from the southern polar region. Called cryovolcanoes, subsequent study of them determined that they are the likely source of Saturn’s E Ring. The existence of these plumes led scientists to suspect that their source was a sub-surface ocean under Enceladus’ ice crust. 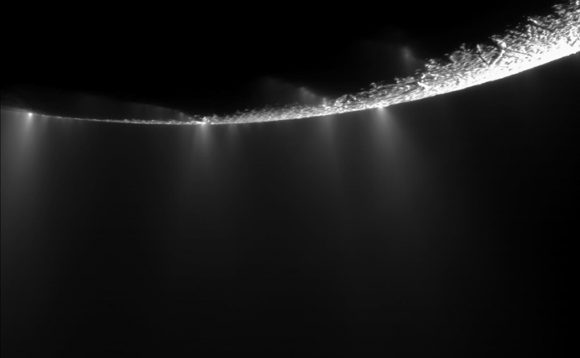 Finding plumes of water erupting from a moon is one thing, but it’s not just water. It’s salt water. Further study showed that the plumes also contained simple organic compounds. This advanced the idea that Enceladus could harbor life. 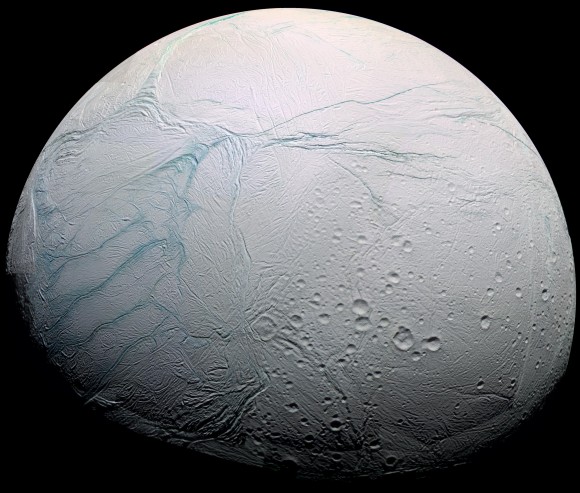 This image of Enceladus shows the features known as “Tiger stripes”. They are the source of the vapor plumes that erupt from the surface. Credit: Cassini Imaging Team, SSI, JPL, ESA, NASA

The geysers aren’t the only evidence for a sub-surface ocean on Enceladus. The southern polar region has a smooth surface, unlike the rest of the moon which is marked with craters. Something must have smoothed that surface, since it is next to impossible that the south polar region would be free from impact craters.

In 2005, Cassini detected a warm region in the south, much warmer than could be caused by solar radiation. The only conclusion is that Enceladus has a source of internal heating. That internal heat would create enough geologic activity to erase impact craters.

So now, two conditions for the existence of life have been met: liquid water, and heat. 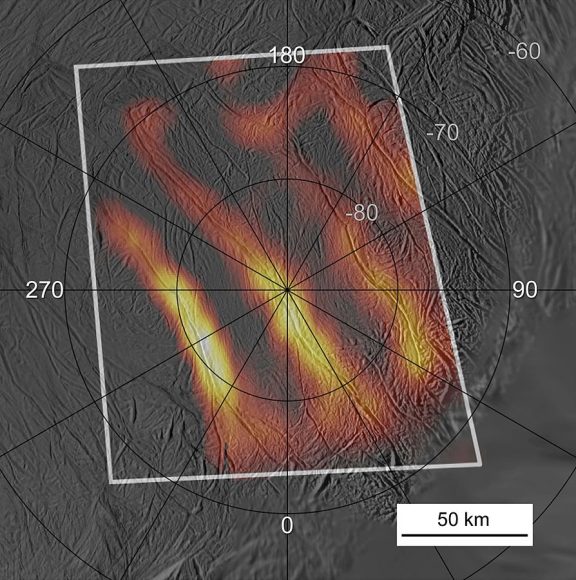 In 2005, data from Cassini showed that the so-called “Tiger Stripe” features on Enceladus’ south pole region are warm spots. Image:NASA/JPL/GSFC/SwRI/SSI

The source of the heat on Enceladus was the next question facing scientists. That question is far from settled, and there could be several sources of heat operating together. Among all the possible sources for the heat, two are most intriguing when it comes to the search for life: tidal heating, and radioactive heating.

Tidal heating is a result of rotational and orbital forces. In Enceladus’ case, these forces cause friction which is dissipated as heat. This heat keeps the sub-surface ocean in liquid form, but doesn’t prevent the surface from freezing solid.

Radioactive heating is caused by the decay of radioactive isotopes. If Enceladus started out as a rocky body, and if it contained enough short-lived isotopes, then an enormous amount of heat would be produced for several million years. That action would create a rocky core surrounded by ice.

Then, if enough long-lived radioactive isotopes were present, they would continue producing heat for a much longer period of time. However, radioactive heating isn’t enough on its own. There would have to be tidal heating also. 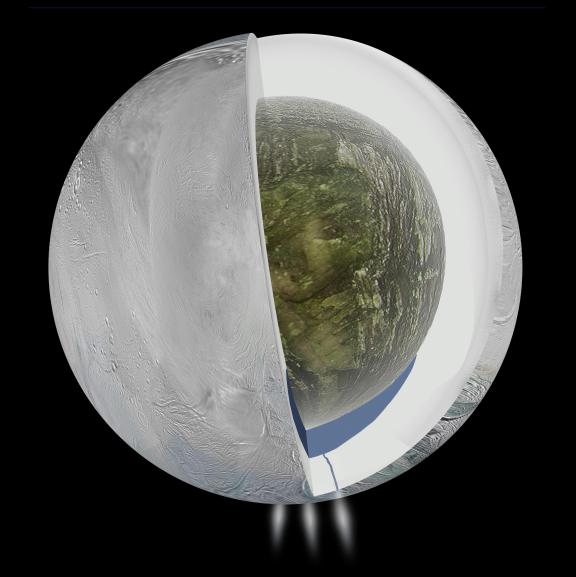 Gravity measurements by NASA’s Cassini spacecraft and Deep Space Network suggest that Saturn’s moon Enceladus, which has jets of water vapor and ice gushing from its south pole, also harbors a large interior ocean beneath an ice shell, as this illustration depicts.
Image Credit:
NASA/JPL-Caltech 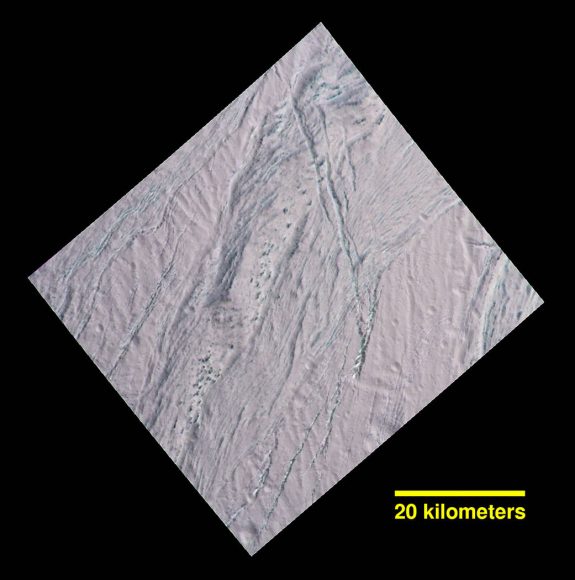 This close up image of Enceladus show the variability of its icy features. The dark spots were originally called “Dalmatian” terrain when first imaged in 2005. There exact nature remained a mystery until ten years later, when Cassini flybys showed that they are actually blocks of bedrock ice scattered along a ridge. The blocks range in size from tens to hundreds of meters. Image: NASA/JPL/Cal-Tech.

The discovery of a warm, salty ocean containing organic molecules is very intriguing, and has expanded our idea of what the habitable zone might be in our Solar System, and in others. Enceladus is much too distant from the Sun to rely on solar energy to sustain life. If moons can provide their own heat through tidal heating or radioactive heating, then the habitable zone in any solar system wouldn’t be determined by proximity to the star or stars at the centre.

Cassini’s mission is nearing its end, and it won’t fly by Enceladus again. It’s told us all it can about Enceladus. It’s up to future missions to expand our understanding of Enceladus.

Numerous missions have been talked about, including two that suggest flying through the plumes and sampling them. One proposal has a sample of the plumes being returned to Earth for study. Landing on Enceladus and somehow drilling through the ice remains a far-off idea better left to science fiction, at least for now.

Whether or not Enceladus can or does harbor life is a question that won’t be answered for a long time. In fact, not all scientists agree that there is a liquid ocean there at all. But whether it does or doesn’t harbor life, Cassini has allowed us to enjoy the tantalizing beauty of that distant object. 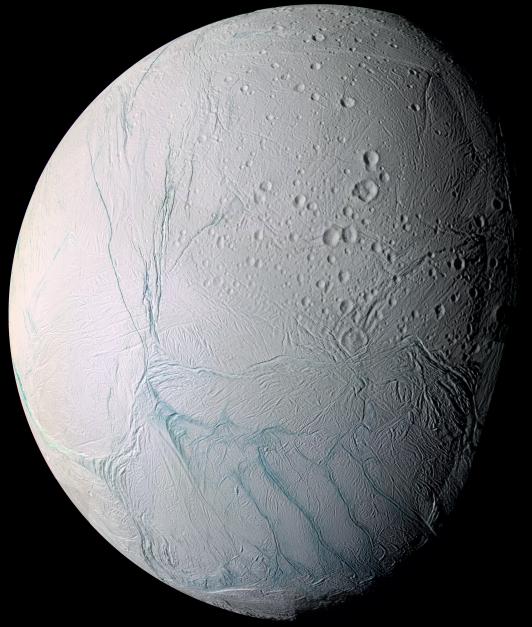