Astro Challenge: Spotting 4 Vesta at its Best for Decades 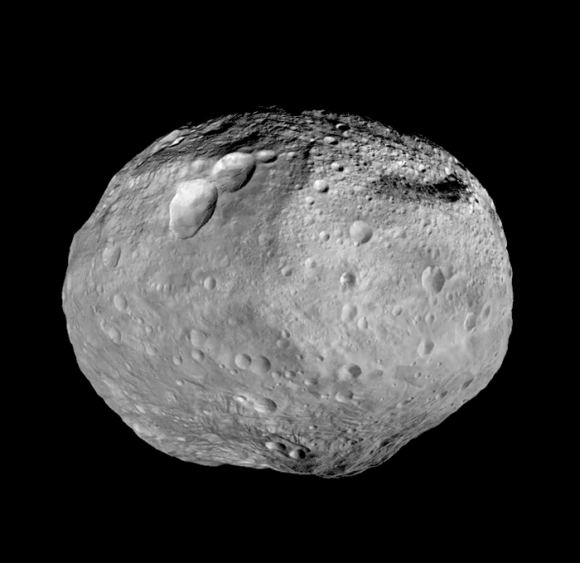 Up for a challenge? Planetary action is certainly heating up this summer: Jupiter passed opposition last month, Saturn does so in June, and Mars reaches favorable viewing next month. And with dazzling Venus in the west and Mercury to joining it starting in late June, we’ll soon have all of the naked eye classical planets in the evening sky.

Now, I want to turn your attention towards a potential naked eye object, one you’ve probably never seen: asteroid 4 Vesta. 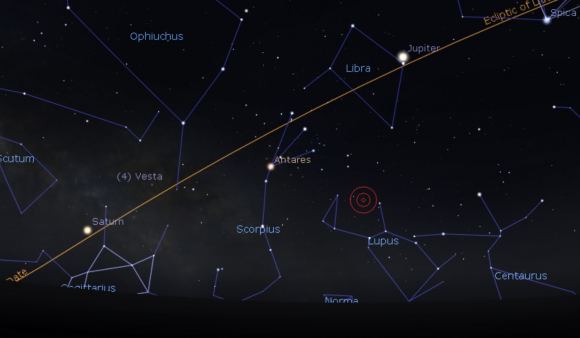 Vesta and the planet(s)… looking east in early June, about 45 minutes after sunset. Stellarium.

Vesta reaches opposition in 2018 on the night of June 19th. At 1.14 Astronomical Units (AU, 170.8 million kilometers) distant, this year’s opposition is slightly more favorable than any other since 1989. We won’t get another pass nearly as close until May 2036. Vesta orbits the Sun once every 3.6 years, ranging from a perihelion of 2.15 AU to an aphelion of 2.57 AU.

Although Vesta was the fourth asteroid discovered, it’s actually the brightest, and the only one visible with the naked eye—that is, if you have dark skies, and know exactly where to look for it. This summer, Vesta loiters in the star rich realm of the astronomical constellation Sagittarius, “in the weeds” for viewers up north, but high in the sky for southern viewers. 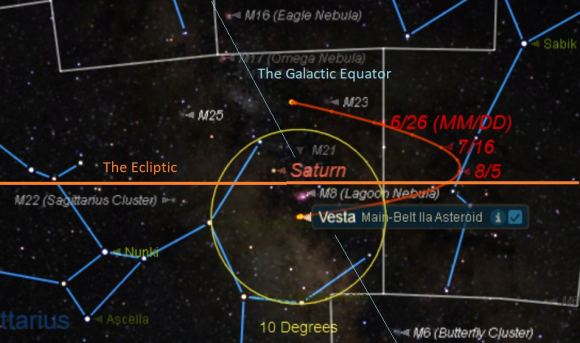 Early June finds Vesta about 5 degrees northwest of the +3.8 magnitude star Mu Sagittarii, threading between the deep sky objects Messier 24 and Messier 25. Vesta then loops westward through the constellation Ophiuchus the Serpent Bearer starting on July 1st, before heading back to Sagittarius on September 5th.

Catching Vesta with the naked eye isn’t easy. You’ll need dark rural skies with a limiting magnitude down to about +5.5, and a good beforehand knowledge of the fixed stars in the region. Vesta also spends 2018 weaving around the star-dappled plane of the Milky Way galaxy, making it an especially challenging target.

Binoculars or a telescope can bring the challenge within reach of suburban and urban skies, making it a pleasure to trace the track of Vesta from night to night. Sketch the background star field and you just might tease out the presence of Vesta as it slowly moves about 30′ arcminutes per night (the diameter of a Full Moon) through June. Crank up the magnification a bit using a large (10 inches aperture or greater) light bucket telescope, and you just might see the faint hint of an oblong disk… 348 by 277 miles (560 by 446 kilometers) in size, Vesta’s apparent size is 0.7” arcseconds around opposition, 1/3 the size of Neptune at its best. 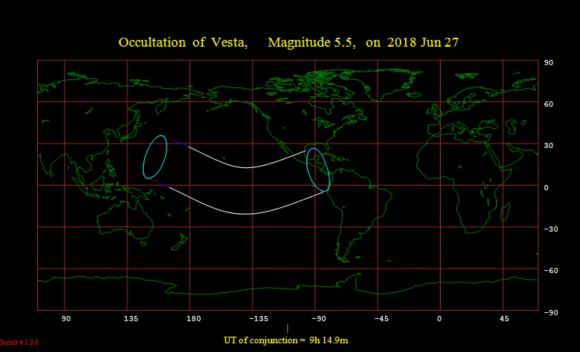 The 99% illuminated, waxing gibbous Moon will actually occult 4 Vesta for Hawaii, Central America and the Galapagos Islands just eight days after opposition on the night of June 27th. 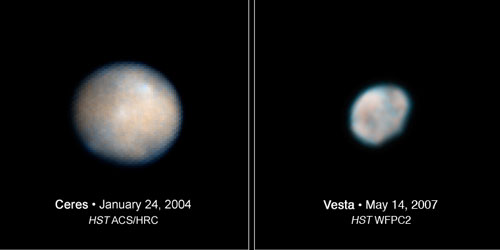 Discovered on the night of March 29th, 1807 by prolific asteroid hunter Heinrich Olber, the Hubble Space Telescope gave us our first blurry images of 4 Vesta back in 2007. NASA’s Dawn spacecraft gave us our first good views of Vesta as a world starting in mid- 2011, orbiting the potato-shaped asteroid for just over a year before departing for 1 Ceres in late 2012.

And did you know: we actually have identified samples of Vesta to study, right here on Earth. Vesta sustained a massive impact about a billion years ago, raining debris through the inner solar system. Dawn chronicled the resulting Rheasilvia impact basin on Vesta’s south pole, and asteroids such as 1981 Midas match the spectral composition of Vesta and are collectively known as “Vestoids”. 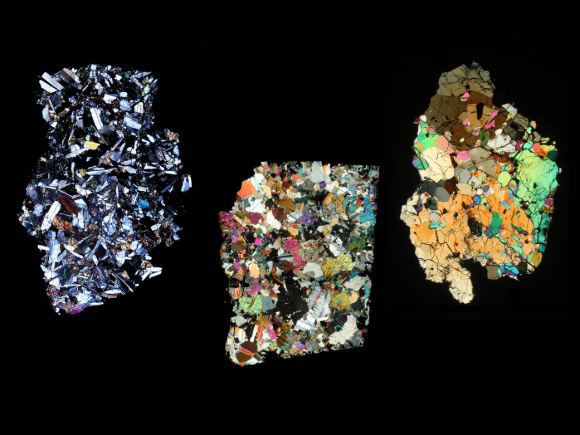 On Earth, meteorites such as QUE 97053 found in Antarctica and the 1913 Moore County fall in North Carolina also match up in composition to Vesta, and make up a subgroup known as Howardite-Eucrite-Diogenite (HED) meteorites. Collectively, space rocks from this single impact on 4 Vesta contribute to an amazing 5% of all the meteorites recovered on Earth.

Fascinating thoughts to ponder, as we follow the brightest asteroid through the summer sky.

The post Astro Challenge: Spotting 4 Vesta at its Best for Decades appeared first on Universe Today.