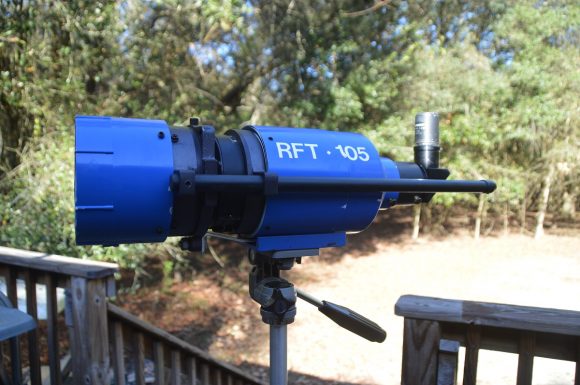 Every telescope has a story to tell, and our discovery of Copyscope sent us on an interesting detective tale. We returned back to the U S of A recently, and one of our first tasks upon re-establishing our lives back in Florida was to dig through the archaeological strata that is our storage unit. Headlamp on and Leatherman in hand, we worked our way hacking through layers put in place over years of storage unit drop-off runs.

On one hand, it’s like Xmas all over again, as you rediscover all your stuff anew. But on the other, you realize when you travel long term just how much you can really do without.

Of course, I was eager to dig my telescopes out. I make do with our trusty pair of image-stabilized Canon 15×45’s on the road, but I was ready to get the REAL telescopes back in action. It was then I discovered an interesting piece of telescope making history that I’d inherited for 20$ a few years back.

Now, Amateur Telescope Makers (ATMs) build some pretty amazing things. Before the 1950s and the advent of mass market commercial telescopes, if you wanted an astronomical telescope, you had to build yourself. But a majority of amateur built telescopes are reflectors, as large mirrors are much easier to grind than lenses. ATM-made refractors are almost unheard of. 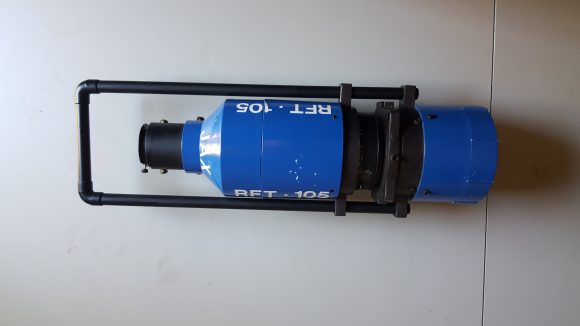 The body of Copyscope, with the eyepiece removed. Credit: Dave Dickinson

I scarcely knew such a beast existed. A friend of mine pulled a short tube refractor out of the back of his pickup truck and asked if I knew anyone that would give this strange homemade telescope a home.

Now, I didn’t build Copyscope, though I wish I had. I did once build a 5 ½” Newtonian telescope out of surplus parts and a stovepipe for about 20$. As the name suggests, Copyscope is built out of plumbing fixtures, brackets and scrap bench stock around an old photocopier lens. Old timers will remember the temperamental type of pre-laser printer copier we’re talking about, one that might as easily smeared ink all over your resume copies, or spit them out like confetti. 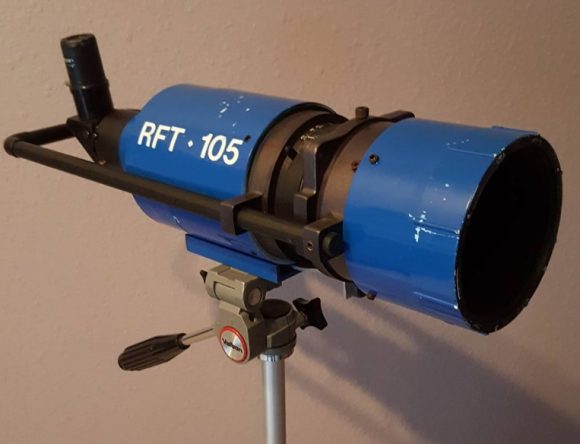 Its pedigree a mystery, Copyscope sent me digging into ye ole web, looking for others of its ilk. In addition to several older websites citing similar creations, the search led me back to a 1986 May edition of Astronomy magazine and an article by Ken Bird detailing the construction of just such an instrument, using a surplus photocopier lens and plumbing fixtures. Another resource often cited is an October 1990 article in Sky and Telescope magazine entitled The Tuneable Finderscope. Much like the first caveman who was hungry enough to try eating rotten grapes, you can imagine way back when the first enterprising ATM with a plumbing background decided to re-purpose a used photocopier lens for astronomy. 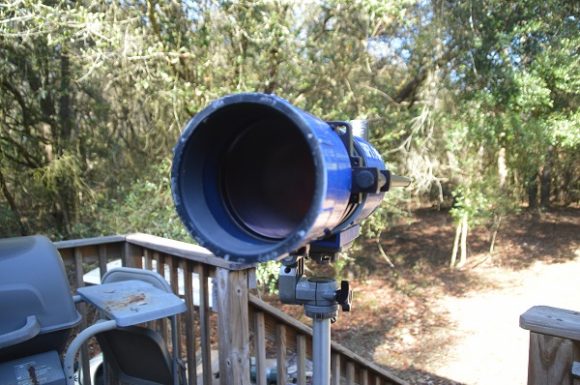 Looking down the lens of Copyscope. Image credit: Dave Dickinson

The first thing that struck us is just how heavy Copyscope is. Weighing in at 10 pounds, it seems better suited to hurling cannonballs than portable astronomy. The handle is handy in this regard, though it means that a right angle eyepiece holder is mandatory. Hefty Copyscope is definitely on the heavy end of what a typical camera tripod can tolerate.

Now, a refined high end $10,000 refractor it isn’t: images of bright objects such as the Moon have a decidedly bluish cast through Copyscope, and the baffling occasionally produces internal reflections. Still, the generous wide field of view makes it great for sweeping wide swaths of the sky for fuzzy nebulae or comets. In fact, the the viewing experience using a standard 24mm eyepiece is more reminiscent of a binocular view than a telescope, at about two degrees across. Copyscope isn’t great for planetary observing, barely resolving Jupiter and Venus as tiny disks. Still, on the plus side, the field of view is so wide that a finderscope isn’t really needed. 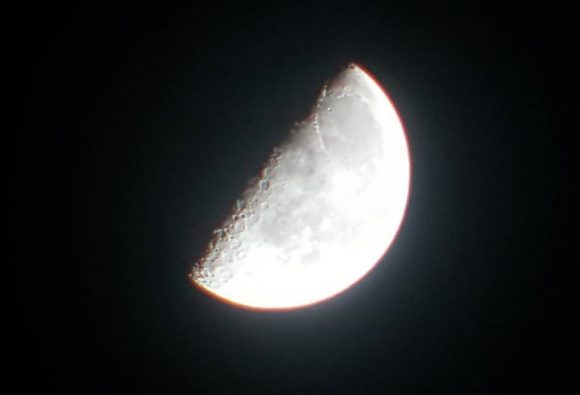 Copyscope has a fast focal length of about 300 millimeters (f/3) and – get this – the designer build a variable f/stop diaphragm into the scope body: 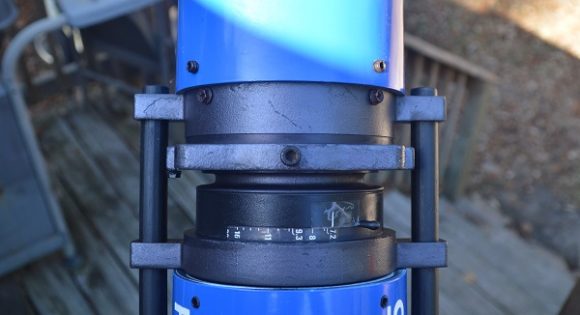 The word (initials?) ‘JAX’ on the back end of the scope remain a mystery. Perhaps the original builder was in the habit of naming telescopes. Still, Copyscope shows what weird and wonderful creations spring from the minds of amateur telescope builders, and is a great conversation piece. Any other unique constructions out there? Let us know!

Update: A discussion of Copyscope on Twitter led us to the conclusion that the back part of CopyScope is built around a large PVC reducer (thanks @Wrecksdart!)

The post Adventures With “Copyscope” appeared first on Universe Today.