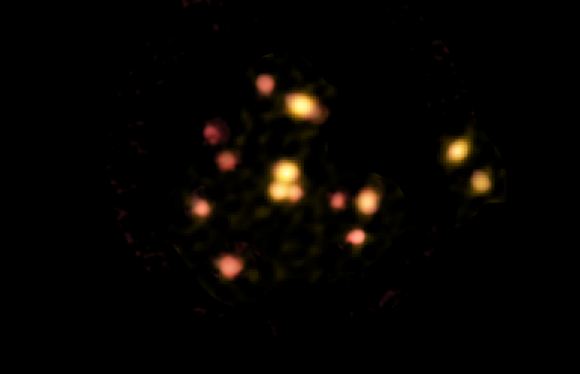 Looking deep into the observable Universe – and hence, back to the earliest periods of time – is an immensely fascinating thing. In so doing, astronomers are able to see the earliest galaxies in the Universe and learn more about how they evolved over time. From this, they are not only able to see how large-scale structures (like galaxies and galaxy clusters) formed, but also the role played by dark matter.

Most recently, an international team of scientists used the Atacama Large Millimeter-submillimeter Array (ALMA) to observe the Universe when it was just 1.4 billion years old. What they observed was a “protocluster”, a series of 14 galaxies located 12.4 billion light-years away that were about to merge. This would result in the formation of a massive galaxy cluster, one of the largest objects in the known Universe.

The study which described their findings, titled “A massive core for a cluster of galaxies at a redshift of 4.3“, recently appeared in the journal Nature. The study was led by Tim Miller – an astronomer from Dalhousie University, Halifax, and Yale University – and included members from NASA’s Jet Propulsion Laboratory, the European Southern Observatory (ESO), Canada’s National Research Council, the Harvard-Smithsonian Center for Astrophysics, the National Radio Astronomy Observatory, and multiple universities and research institutions.

ALMA image of 14 galaxies forming a protocluster known as SPT2349-56. These galaxies are in the process of merging and will eventually form the core of a truly massive galaxy cluster. Credit: ALMA (ESO/NAOJ/NRAO); B. Saxton (NRAO/AUI/NSF)

As they indicate in their study, this protocluster (designated SPT2349-56) was first observed by the National Science Foundation’s South Pole Telescope. Using the Atacama Pathfinder Experiment (APEX), the team conducted follow-up observations that confirmed that it was an extremely distant galactic source, which was then observed with ALMA. Using ALMA’s superior resolution and sensitivity, they were able to distinguish the individual galaxies.

What they found was that these galaxies were forming stars at rate 1,000 times faster than our galaxy, and were crammed inside a region of space that was about three times the size of the Milky Way. Using the ALMA data, the team was also able to create sophisticated computer simulations that demonstrated how this current collection of galaxies will likely grow and evolve over billion of years.

These simulations indicated that once these galaxies merge, the resulting galaxy cluster will rival some of the most massive clusters we see in the Universe today. As Scott Chapman, and astrophysicist at Dalhousie University and a co-author on the study, explained:

“Having caught a massive galaxy cluster in throes of formation is spectacular in and of itself. But, the fact that this is happening so early in the history of the universe poses a formidable challenge to our present-day understanding of the way structures form in the universe.” 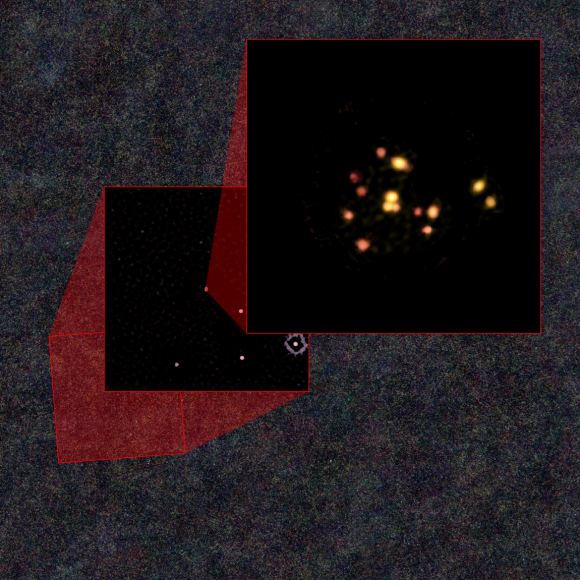 The current scientific consensus among astrophysicists states that a few million years after the Big Bang, normal matter and dark matter began to form larger concentrations, eventually giving rise to galaxy clusters. These objects are the largest structures in the Universe, containing trillions of stars, thousands of galaxies, immense amounts of dark matter and massive black holes.

However, current theories and computer models have suggested that protoclusters – like the one observed by ALMA – should have taken much longer to evolve. Finding one that dates to just 1.4 billion years after the Big Bang was therefore quite the surprise. As Tim Miller, who is currently a doctoral candidate at Yale University, indicated:

“How this assembly of galaxies got so big so fast is a bit of a mystery, it wasn’t built up gradually over billions of years, as astronomers might expect. This discovery provides an incredible opportunity to study how galaxy clusters and their massive galaxies came together in these extreme environments.”

Looking to the future, Chapman and his colleagues hope to conduct further studies of SPT2349-56 to see how this protoclusters eventually became a galaxy cluster. “ALMA gave us, for the first time, a clear starting point to predict the evolution of a galaxy cluster,” he said. “Over time, the 14 galaxies we observed will stop forming stars and will collide and coalesce into a single gigantic galaxy.”

The study of this and other protoclusters will be made possible thanks to instruments like ALMA, but also next-generation observatories like the Square Kilometer Array (SKA). Equipped with more sensitive arrays and more advanced computer models, astronomers may be able to create a truly accurate timeline of how our Universe became what it is today.

The post Astronomers See a Pileup of 14 Separate Galaxies in the Early Universe appeared first on Universe Today.