By Jove: Jupiter at Opposition for 2018 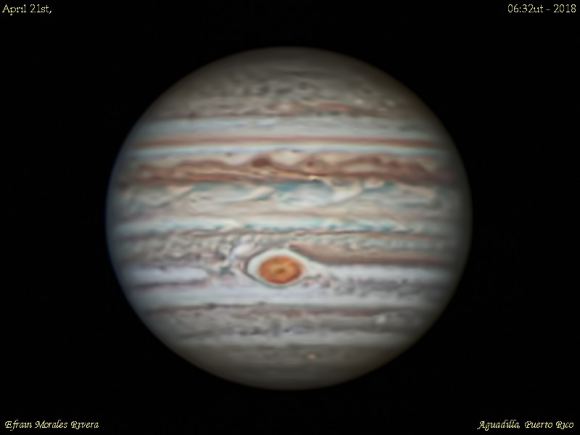 It’s a question I’ve fielded lots this weekend leading up to last night’s April Pink Full Moon, and one I expect we’ll get again tonight: “What’s that bright star near the Moon?”

That bright “star” is actually a planet, the king of them all as far as our Solar System is concerned: Jupiter. May also ushers in Jupiter observing season, as the planet reaches opposition on May 9th, rising in the east opposite to the setting Sun to the west. Jupiter now joins Venus in the dusk sky, ending the planetary drought plaguing many an evening star party. 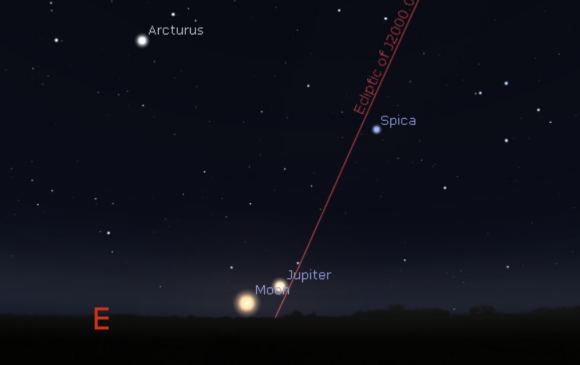 All planetary news seems to lead back to Jupiter this season. Just last week, we wrote about a recent study, suggesting that Jupiter actually gets hit by asteroids and comets on a much more regular basis than astronomers thought.

It’s always worth keeping a sharp eye on Jupiter. Shining a magnitude -2.5 near opposition, you can even pick Jupiter out against the deep blue daytime sky… if you know exactly where to look for it. The Moon visits Jupiter once every orbit, and the next time to try this feat of visual athletics is on May 27th, just before sunset.

Jupiter is 4.4 astronomical units (658 million kilometers) distant at opposition this year, and presents a disk 45” across.

At the eyepiece, Jupiter presents a roiling upper atmosphere, completing an amazing rotation once every 9.9 hours. This is not only fast enough to give Jove a noticeable equatorial bulge at its equator, but you can also observe and image Jupiter in its entirety in just one clear evening.

One of the first things that becomes apparent observing Jupiter at low power are its retinue of four Galilean moons. These are, from interior outward: Io, Europa, Ganymede and Callisto. Speedy Io takes just 1.8 days to orbit Jupiter once, while outermost Callisto takes a leisurely 16.7 days to make one circuit around Jupiter. Not only is it fun to note the changes in configuration of Jupiter’s major moons from night to night, but it’s interesting to watch them cast shadows onto Jupiter’s cloud tops and alternately disappear and reappear in and out of Jupiter’s shadow. 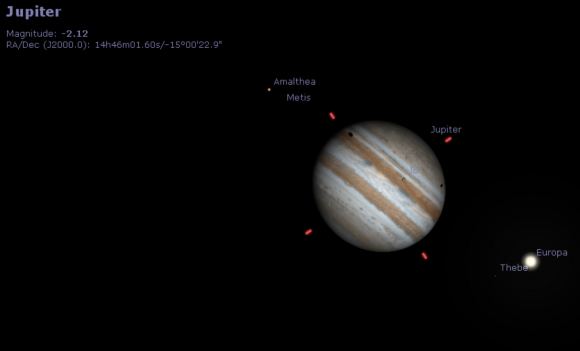 A few times a year, you can catch two moons casting a shadow on Jupiter at once. These usually happen in seasons, with the next pair involving Io and Europa (the most frequent transiters) set to occur on July 30th, 2018. Rarer still are triple transits, which last occurred on January 24th, 2015 and will happen next on March 20th, 2032. You’ll never see a quadruple transit though… and the outermost moon Callisto is the only one that can “miss” Jupiter, as it does in 2018.

The celestial scene changes, too, like a spotlight cast over the stage of the sky. At opposition, for example, Jupiter and its moons cast their respective shadows straight back, nearly behind them from our perspective. Watch how this changes, however, as Jupiter heads towards quadrature at 90 degrees elongation east of the Sun on August 6th, 2018 and we see Jupiter and its moons cast their shadows to the side.

Danish astronomer Ole Rømer noted a discrepancy in the timings of shadow transits near opposition versus quadrature and correctly realized that light from the events was actually taking time to transit from Jupiter to his telescope on Earth, and made the first crude measurement of the speed of light in 1676.

Crank up the magnification, and the Great Red Spot will pop into view if it’s turned Earthward. Though this centuries-long storm has been shrinking in recent years, it also seems to be condensing and reddening once again, versus the pale salmon color its exhibited as of late. How old is the Great Red Spot? Will it disappear this century, disappointing legions of school kids who diligently crayon in a ruby red eye on Jove?

One thing is for sure; the face of Jove does change over time. Another interesting example is the disappearing act that Jove’s Southern Equatorial Belt (SEB) makes every decade or so… this last occurred during 2010 season, and we may soon be due again. It would be an amazing scientific opportunity if this were to occur before NASA’s Juno spacecraft completes its mission this summer. Our question: why does the SEB disappear, while the NEB seems to be a permanent fixture on Jove?

All mysteries presented by the largest planet in our solar system, this opposition season 2018.

The post By Jove: Jupiter at Opposition for 2018 appeared first on Universe Today.