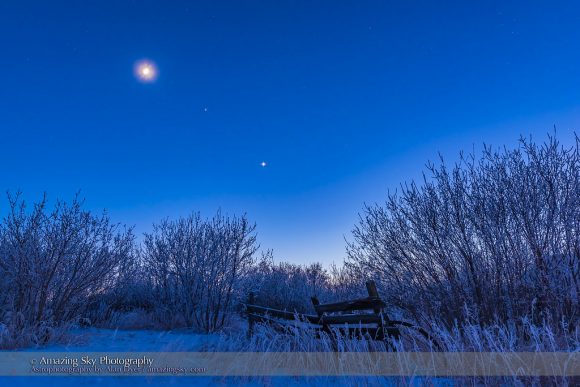 Venus, Mars, and the waxing crescent Moon at dusk from the evening of January 3rd, 2017. Image credit and copyright: Alan Dyer.

“What’s that bright light in the sky?” The planet Venus never fails to impress, and indeed makes even seasoned observers look twice at its unexpected brilliance. The third brightest natural object in the sky, Venus now rules the dusk, a fine sight for wintertime evening commuters. Venus reaches greatest elongation tomorrow, a excellent time to admire this dazzling but shrouded world of mystery.

Only the two planets interior to Earth’s orbit – Mercury and Venus – can reach a point known as greatest elongation from the Sun. As the name suggests, this is simply the point at which either planet appears to be at its maximum angular distance from the Sun. Think of a big right triangle in space, with Venus or Mercury at the right angle vertex, and the Sun and Earth at the other two corners. High school geometry can come in handy! 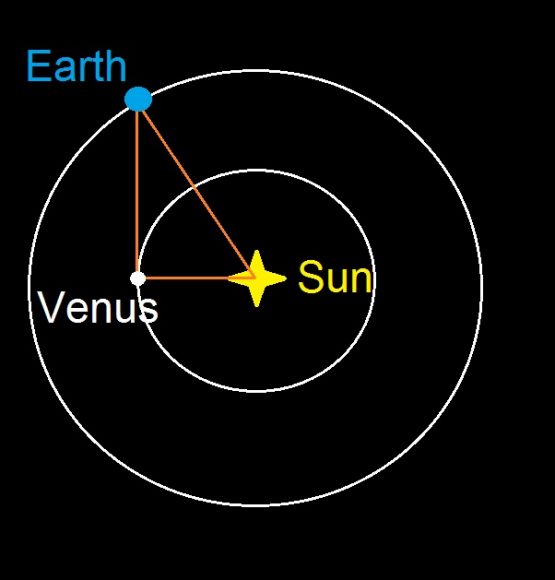 Venus at greatest elongation (planets and orbits not to scale). Credit: Dave Dickinson

This Thursday on January 12th Venus reaches a maximum of 47 degrees elongation from the Sun at 11:00 Universal Time (UT) / 6:00 AM Eastern Standard Time, shining at magnitude -4.4. The maximum/minimum elongation for Venus that can occur is 47.3 to 45.4 degrees respectively, and this week’s is the widest until 2025.

Here’s some key dates to watch out for:

Jan 12th: Venus passes less than a degree from Neptune.

January 31st: The Moon passes 4 degrees south of Venus, and the two also form a nice equilateral triangle with Mars on the same date. 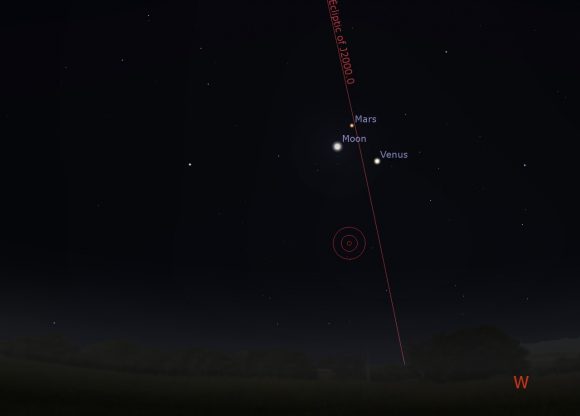 March 26th: Solar conjunction for Venus occurs eight degrees north of the Sun … it is possible to spy Venus at solar conjunction from high northern latitudes, just be sure to block out the Sun.

Through the telescope, Venus displays a tiny 24.4” size half phase right around greatest elongation. You could stack 74 Venuses across the diameter of tomorrow’s Full Moon. When does Venus look to reach an exact half phase to you? This point, known as theoretical dichotomy, is often off by just a few days. This is a curious observed phenomenon, first noted by German amateur astronomer Johann Schröter in 1793. The effect now bears his name. A result of atmospheric refraction along the day/terminator on Venus, or an optical illusion? 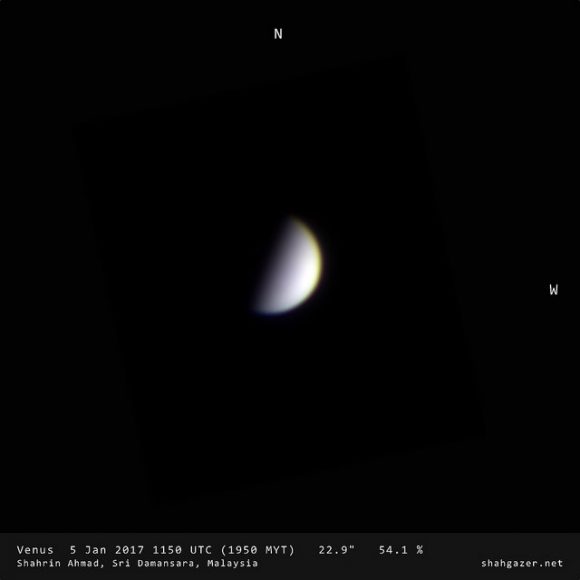 Almost there… a waning gibbous Venus from the evening of January 5th, 2017. Image credit and copyright: Shahrin Ahmad (@Shahgazer)

And hey, amateurs are now using ultraviolet filters to get actual detail on the cloud-tops of Venus… we like to use a variable polarizing filter to cut down the dazzling glare of Venus a bit at the eyepiece.

Also, keep an eye out for another strange phenomenon, known as the Ashen Light of Venus. Now,ashen light or Earthshine is readily apparent on dark side of the Moon, owing to the presence of a large sunlight reflector nearby, namely the Earth. Venus has no such large partner, though astronomers in the early age of telescopic astronomy claimed to have spied a moon of Venus, and even went as far as naming it Neith. An optical illusion? Or real evidence of Venusian sky glow on its nighttime side? After tomorrow, Venus will begin heading between the Earth and the Sun, becoming a slender crescent in the process. Solar conjunction occurs on March 25th, 2017. Venus sits just eight degrees north of the Sun on this date, and viewers in high Arctic latitudes might just be able to spy Venus above the horizon before sunrise on the day of solar conjunction. We performed a similar feat of visual athletics on the morning of January 16th, 1998 observing from North Pole, Alaska. 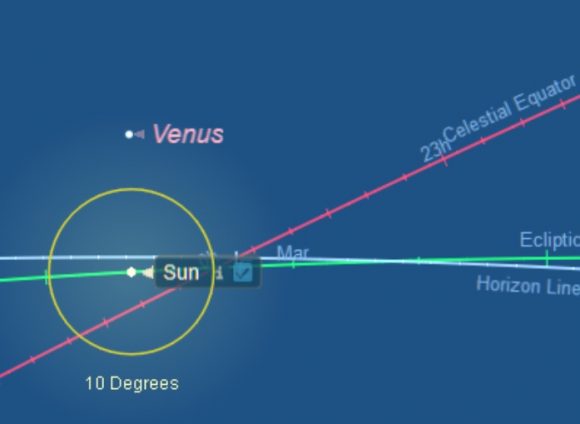 Venus as seen from Fairbanks, Alaska on the morning of solar conjunction, 2017. Image credit: Starry Night.

From there, Venus heads towards a fine dawn elongation on June 3rd, 2017. All of these events and more are detailed in our free e-book: 101 Astronomical Events for 2017.

Spying Venus in the Daytime

Did you know: you can actually see Venus in the daytime, if you know exactly where to look for it? A deep blue, high contrast sky is the key, and a nearby crescent Moon is handy in your daytime quest. Strange but true fact: Venus is actually brighter than the Moon per square arc second, with a shiny albedo of 70% versus the Moon’s paltry 12%. But Venus is tiny, and hard to spot against the blue daytime sky… until you catch sight of it. 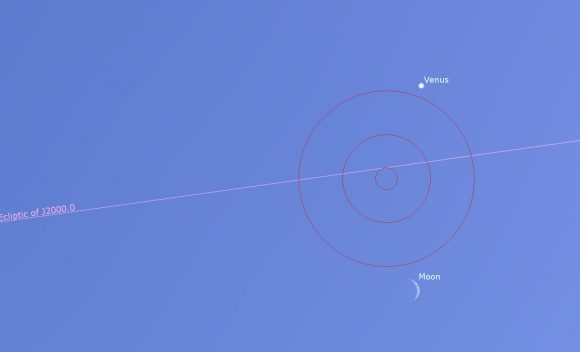 There’s another reason to brave the January cold for northern hemisphere residents: Venus can indeed cast a shadow if you look carefully for it. You’ll need to be away from any other light sources (including the Moon, which passes Full tomorrow as well with the first Full Moon of 2017, known as a Full Wolf Moon). And a high contrast surface such as freshly fallen snow can help… a short time exposure shot can even bring the shadow cast by Venus into focus.

If you follow Venus long enough, you’ll notice a pattern, as it visits very nearly the the same sky environs every eight years and traces out approximately the same path in the dawn and dusk sky. There’s a reason for this: 8 Earth years (8x 365.25 = 2922 days) very nearly equals 5 the synodic periods for Venus (2922/5=584 days, the number of days it takes Venus to return to roughly the same point with respect to the starry background, separate from its true orbit around the Sun of 225 days). For example, Venus last crossed the Pleiades star cluster in 2012, and will do so again in – you guessed it — in 2020. Unfortunately, this pattern isn’t precise, and Venus won’t also transit the Sun again in 2020 like it did in 2012. You’ll have to wait until one century from this year on December 10-11th, 2117 to see that celestial spectacle again….

Hopefully, we’ll have perfected that whole Futurama head-in-a-jar thing by then.