Venus Returns to the Dusk Sky

Venus returns  – The changing phases of Venus, from the 2013 apparition. Credit and copyright: Shahrin Ahmad (@Shahgazer)

Where have all the planets gone? The end of February 2018 sees the three naked eye outer planets – Mars, Jupiter and Saturn — hiding in the dawn. It takes an extra effort to brave the chill of a February morning, for sure. The good news is, the two inner planets – Mercury and Venus – begin favorable dusk apparitions this week, putting on a fine sunset showing in March.

Venus in 2018: Venus begins the month of March as a -3.9 magnitude, 10” disk emerging from behind the Sun. Venus is already over 12 degrees east of the Sun this week, as it begins its long chase to catch up to the Earth. Venus always emerges from behind the Sun in the dusk, lapping the Earth about eight months later as it passes through inferior conjunction between the Sun and the Earth as it ventures into the dusk sky.

Follow that planet, as Venus reaches greatest elongation at 45.9 degrees east of the Sun on August 17th. Venus occupies the apex of a right triangle on this date, with the Earth at the end of one vertice, and the Sun at the end of the other. 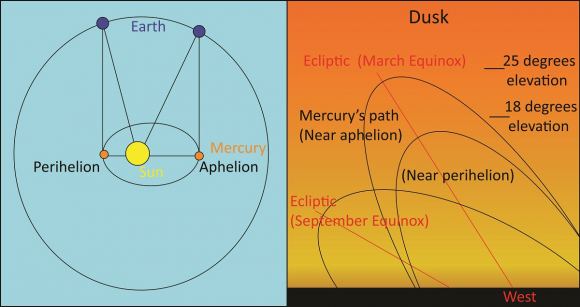 Not all elongations of Mercury or Venus are equal, but depend on the seasonal angle of the ecliptic, and whether they occur near aphelion or perihelion. Credit: Dave Dickinson

Mercury joins the fray in early March, as the fleeting innermost world races up to meet Venus in the dusk. March 4th is a great date to check Mercury off of your life list, as the -1.2 magnitude planet passes just 66′ – just over a degree, or twice the span of a Full Moon – from Venus. Mercury reaches greatest elongation 18.4 degrees east of the Sun on March 15th.

And the Moon makes three on the evening of March 18th, as Mercury, Venus and the slim waxing crescent Moon form a line nine degrees long. 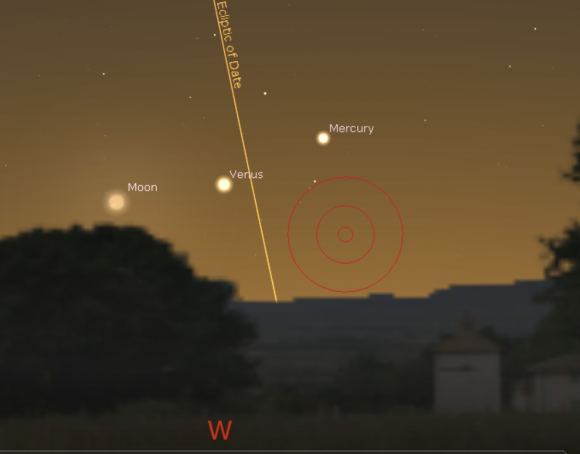 It’s a bit of a cosmic irony: Venus, the closest planet to the Earth, is also eternally shrouded in clouds and appears featureless at the eyepiece. The most notable feature Venus exhibits are its phases, similar to the Moon’s. Things get interesting as Venus reaches half phase near greatest elongation. After that, the disk of Venus swells in size but thins down to a slender crescent. Venus’s orbit is tilted 3.4 degrees relative to the ecliptic, and on some years, you can follow it right through inferior conjunction from the dusk to the dawn sky. Unfortunately, this also means that Venus usually misses transiting the disk of the Sun, as it last did on June 5-6th, 2012, and won’t do again until just under a century from now on December 10-11th, 2117.

Small consolation prize: Mercury, a much more frequent solar transiter, will do so again next year on November 11-12th, 2019.

Amateur astronomers have, however, managed to tease out detail from the Venusian cloudtops using ultraviolet filters. And check out this amazing recent image of Venus courtesy of the Japanese Space Agency’s Akatsuki spacecraft: 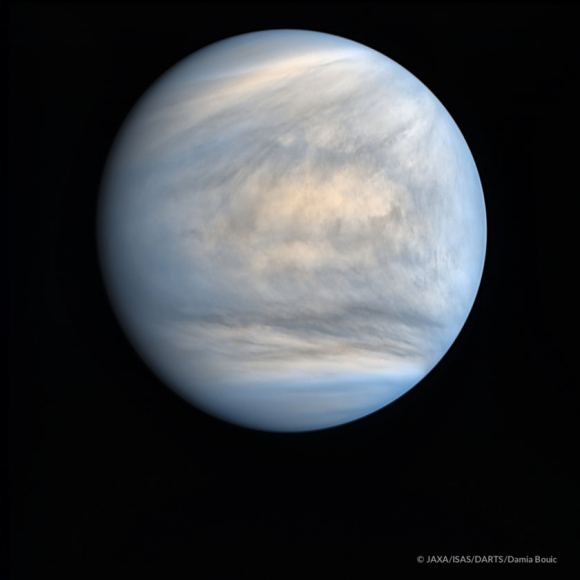 It’s one of our favorite astro-challenges. Can you see Venus in the daytime? Once you’ve seen it, it’s surprisingly easily to spy… the main difficulty is to get your eyes to focus in on it without any other references against a blank sky. The crescent Moon makes a great visual aid in this quest; although the Moon’s reflectivity or albedo is actually much lower than Venus’s, it’s larger apparent size in the sky makes it stand out. Key upcoming dates to see Venus near the Moon around greatest elongation are April 17th, May 17th, June 16th, July 15th, and Aug 14th.

Apparitions of Venus also follow a predictable eight year cycle. This occurs because 13 orbits of Venus very nearly equals eight orbits of the Earth. For example, Venus will resume visiting the Pleiades star cluster during the dusk 2020 apparition, just like it did back before 2012.

When does Venus appear half illuminated to you? This stage is known as dichotomy, and its actual observed point can often be several days off from its theoretical arrival. Also keep an eye out for the Ashen Light of Venus, a faint illumination of the planet’s night side during crescent phase, similar to the familiar sight seen on the crescent Moon. Unlike the Moon, however, Venus has no nearby body to illuminate its nighttime side… What’s going on here? Is this just the psychological effect of the brain filling in what the eye sees when it looks at the dazzling curve of the crescent Venus, or is it something real? Long reported by observers, a 2014 study suggests that a nascent air-glow or aurora may persist on the broiling night side of Venus.

All thoughts to ponder, as you follow Venus emerging into the dusk sky this March.

The post Venus Returns to the Dusk Sky appeared first on Universe Today.