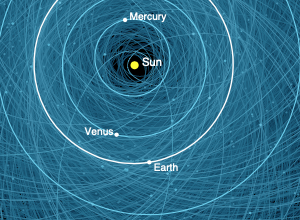 To date, nearly 28,000 near-Earth asteroids (NEAs) have been found by survey telescopes that continually scan the night sky, adding new discoveries at a rate of about 3,000 per year. But as larger and more advanced survey telescopes turbocharge the search over the next few years, a rapid uptick in discoveries is expected. In anticipation of this increase, NASA astronomers have developed a next-generation impact monitoring algorithm called Sentry-II to better evaluate NEA impact probabilities.