Maybe Mars and Earth Didn’t Form Close to Each Other 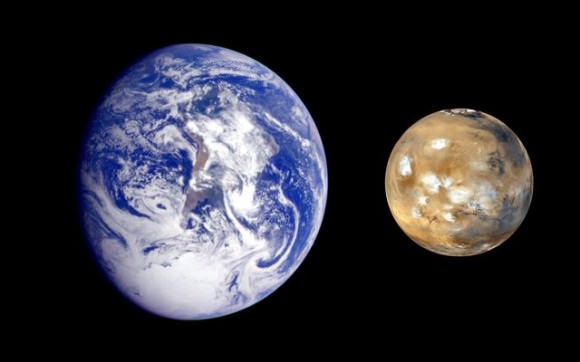 In recent years, astronomers have been looking to refine our understanding of how the Solar System formed. On the one hand, you have the traditional Nebular Hypothesis which argues that the Sun, the planets, and all other objects in the Solar System formed from nebulous material billions of years ago. However, astronomers traditionally assumed that the planets formed in their current orbits, which has since come to be questioned.

This has come to be challenged by theories like the Grand Tack model. This theory states that Jupiter migrated from its original orbit after it formed, which had a big impact on the inner Solar System. And in a more recent study, an international team of scientists have taken things a step further, proposing that Mars actually formed in what is today the Asteroid Belt and migrated closer to the Sun over time.

The study, titled “The cool and distant formation of Mars“, recently appeared in the journal Earth and Planetary Science Letters. The study was led by Ramon Brasser of the Earth Life Science Institute at the Tokyo Institute of Technology, and included members from the University of Colorado, the Hungarian Academy of Sciences, and the University of Dundee in the UK.

For the sake of their study, the team addressed one of the most glaring issues with traditional models of Solar System formation. This is the assumption that Mars, Earth and Venus formed closely together and that Mars migrated outward to its current orbit. In addition, the theory holds that Mars – roughly 53% as large as Earths and only 15% as massive – is essentially a planetary embryo that never became a full, rocky planet.

However, this has contradicted by bulk elemental and isotopic studies performed on Martian meteorites, which have noted key differences in composition between Mars and Earth. As Brasser and his team indicated in their study:

“This suggests that Mars formed outside of the terrestrial feeding zone during primary accretion. It is therefore probable that Mars always remained significantly farther from the Sun than Earth; its growth was stunted early and its mass remained relatively low.”

To test this hypothesis, the team conducted dynamical simulations that were consistent with the Grand Tack model. In these simulations, Jupiter moved a large concentration of mass towards the Sun at it migrated towards the inner Solar System, which had a profound influence on the formation and orbital characteristics of the terrestrial planets (Mercury, Venus, Earth and Mars).

The theory also holds that this migration pulled material away from Mars, thus accounting for the compositional differences and the planet’s smaller size and mass relative to Venus and Earth. What they found was that in a small percentage of their simulations, Mars formed farther from the Sun and that Jupiter’s gravitational pull pushed Mars into its current orbit. 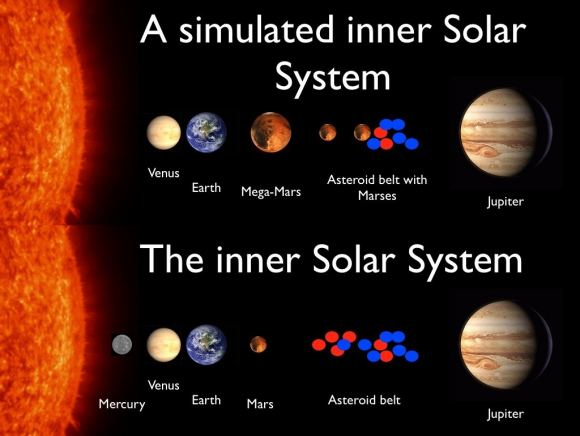 The Grand Tack model (top) compared to the traditional theories about how the Inner Solar System formed. Credit: Sean Raymond/planetplanet.net

From this, the team concluded that either scientists lack the necessary mechanisms to explain Mars’ formation, or that of all the possibilities, this statistically rare scenario is indeed the correct one. As Stephen Mojzsis – a geological sciences professor at the University of Colorado and a co-author on the study – indicated in a recent interview with Astrobiology Magazine, the fact that the scenario is rare does not make it any less plausible:

“Given enough time, we can expect these events. For example, you’ll eventually get double sixes if you roll the dice enough times. The probability is 1/36 or roughly the same as we get for our simulations of Mars’ formation.”

In truth, a 2% probability (which is what they obtained from the simulations) is hardly poor odds when considered in cosmological terms. And when one considers that such a possibility would allow for the key differences between Mars and its terrestrial cousins (i.e. Earth and Venus), this slim probability appears rather possible. However, the idea that Mars migrated inward during the course of its history also carries with it some serious implications.

For starters, the researchers were pressed to explain how Mars could have possessed a thicker, warmer atmosphere that would have allowed for liquid water to exist on the surface. If Mars actually formed in the modern-day Asteroid Belt, it would have been subject to far less solar flux, and surface temperatures would have been significantly lower than if it had formed in its present-day location. 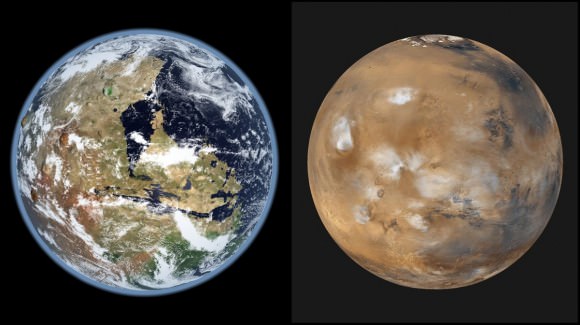 Scientists were able to gauge the rate of water loss on Mars by measuring the ratio of water and HDO from today and 4.3 billion years ago. Credit: Kevin Gill

However, as they go to indicate, if Mars had enough carbon-dioxide in its early atmosphere, then it is possible that impacts during the Late Heavy Bombardment could have allowed for intermittent periods where liquid water could exist on the surface. Or as they explain it:

“Unless, as our model shows, an intrinsically volatile-rich Mars possessed a strong and sustainable greenhouse atmosphere, its average surface temperature was unremittingly below 0 °C. Such a cold surface environment would have been regularly affected by early impact bombardments that both restarted a moribund hydrological cycle, and provided a haven for possible early life in the martian crust.”

Basically, while Mars would have been subject to less in the way of solar energy during its early lifespan, its possible it could have still been warm enough to support liquid water on its surface. And as Mojzsis stated in a paper he co-authored last year, the many bombardments it received (as attested to by its many craters) would have been enough to melt surface ice, thicken the atmosphere, and trigger a periodic hydrological cycle.

Another interesting thing about this study is how it predicts that Venus likely has a bulk composition (including its oxygen isotopes) that is similar to that of the Earth-Moon system. According to their simulations, this is due to the fact that Venus and Earth always shared the same building blocks, whereas Earth and Mars did not. These findings were consistent with recent ground-based infrared observations of Venus and its atmosphere. 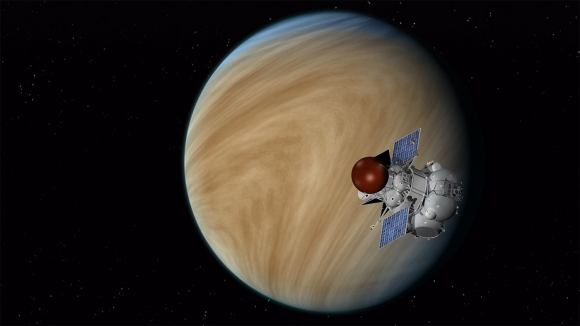 Artist’s impression of the joint NASA-Roscosmos Venera-D mission concept, which wold include a Venus orbiter and a lander designed to survive on Venus’ surface for a few hours. Credit: NASA/JPL-Caltech

But of course, no definitive conclusions can be drawn about that until samples of Venus’ crust can be obtained. This could be accomplished if and when the proposed Venera-Dolgozhivuschaya (Venera-D) mission – a joint NASA/Roscomos plan to send a orbiter and lander to Venus – is launched in the coming decade. In the meantime, there are other outstanding issues in the Grand Tack model and Nebular Hypothesis that need to be addressed.

According to Mojzsis, these include how the gas/ice giants of the Solar System could have formed in their current locations. The idea that they formed in their current orbits beyond the Asteroid Belt seems inconsistent with models of the early Solar System, which show that there was not enough of the necessary material that far from the Sun. An alternative is that they formed closer to the Sun and also migrated outward.

As Mojzsis explained, this possibility is bolstered by recent studies of extra-solar planetary systems, where gas giants have been found to orbit very close to their stars (i.e. “Hot Jupiters”) and farther away:

“We understand from direct observations via the Kepler Space Telescope and earlier studies that giant planet migration is a normal feature of planetary systems. Giant planet formation induces migration, and migration is all about gravity, and these worlds affected each other’s orbits early on.”

If there’s one benefit to being able to look farther out into the Universe, its the way it has allowed astronomers to come up with better and more complete theories of how the Solar System came to be. And as our exploration of the Solar System continues to grow, we are sure to learn many things that will help advance our understanding of other star systems as well.

The post Maybe Mars and Earth Didn’t Form Close to Each Other appeared first on Universe Today.