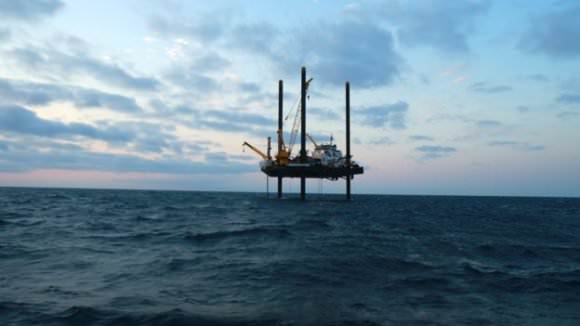 The asteroid that struck Earth about 66 million years ago and led to the mass extinction of dinosaurs may have hit one of the worst places possible as far as life on Earth was concerned. When it struck, the resulting cataclysm choked the atmosphere with sulphur, which blocked out the Sun. Without the Sun, the food chain collapsed, and it was bye-bye dinosaurs, and bye-bye most of the other life on Earth, too.

But, as it turns out, if it had struck a few moments earlier or later, it would not have hit the Yucatan, and things may have turned out differently. Why? Because of the concentration of the mineral gypsum in that area.

The place where the asteroid hit Earth is called the Chicxulub Crater, and scientists have been studying that area to try to learn more about the impact event that altered the course of life on Earth. An upcoming BBC documentary called “The Day The Dinosaurs Died,” focuses on what happened when the asteroid struck. Drill-core samples from the Yucatan area help explain the events that followed the impact.

The drilling rig off the coast of the Yucatan. The rig was there in the Spring of 2016 obtaining samples from the seafloor. Image: BBC/Barcroft Productions.

The core samples, which are from as deep as 1300 m beneath the Gulf of Mexico, are from a feature called the peak ring.

When the asteroid struck Earth, it excavated a crater 100 km across and 30 km deep. This crater collapsed into a wider but shallower crater 200 km across and a few km deep. Then the center of the crater rebounded, and collapsed again, leaving the peak ring feature. The Chicxulub crater is now partly under water, and that’s where a drilling rig was set up to take samples. 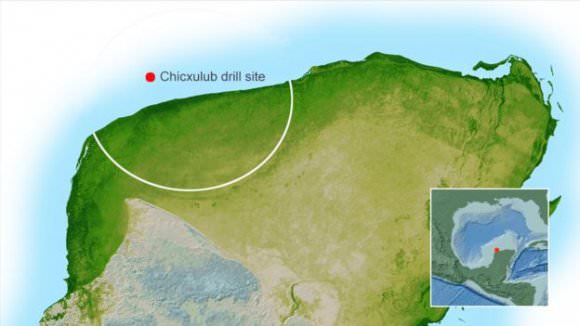 The peak ring is at the center of the crater, offshore of the Yucatan Peninsula. Image: NASA/BBC

The core samples revealed rock that has been heavily fractured and altered by immense pressures. The same impact that altered those rocks would have generated an enormous amount of heat, and that heat created an enormous cloud of sulphur from the vaporized gypsum. That cloud persisted, which led to a global winter. Temperatures dropped, plant growth came to a standstill, and the course of events on Earth were altered forever.

“Had the asteroid struck a few moments earlier or later, rather than hitting shallow coastal waters it might have hit deep ocean,” documentary co-presenter Ben Garrod told the BBC.

“This is where we get to the great irony of the story – because in the end it wasn’t the size of the asteroid, the scale of blast, or even its global reach that made dinosaurs extinct – it was where the impact happened,” said Ben Garrod, who presents “The Day The Dinosaurs Died” with Alice Roberts.

“An impact in the nearby Atlantic or Pacific oceans would have meant much less vaporised rock – including the deadly gypsum. The cloud would have been less dense and sunlight could still have reached the planet’s surface, meaning what happened next might have been avoided,” said Garrod.

In the documentary, host Alice Roberts will also visit a quarry in New Jersey, where fossil evidence shows a massive die-off in a very short period of time. In fact, these creatures could have died on the very day that the asteroid struck. 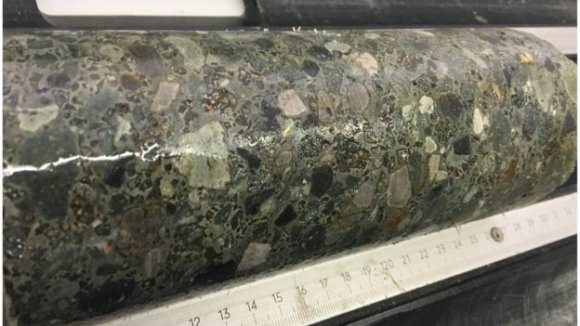 The core samples from the drilling rig show rocks that were subjected to immense heat and pressure at the time of the impact. Image: Barcroft Productions/BBC

“All these fossils occur in a layer no more than 10cm thick,” palaeontologist Ken Lacovara tells Alice. “They died suddenly and were buried quickly. It tells us this is a moment in geological time. That’s days, weeks, maybe months. But this is not thousands of years; it’s not hundreds of thousands of years. This is essentially an instantaneous event.”

There’s also what’s called the K-T Boundary, or Cretaceous-Tertiary Boundary. It’s a geological signature dating to 66 million years ago, which marks the end of the Cretaceous Period. In that boundary is a layer of iridium at very high concentrations, much higher than is normally present in the Earth’s crust. Since iridium is much more abundant in asteroids, the conclusion is that it was probably deposited by an asteroid.

But this is the first evidence that shows how critical the actual location of the event may have been. If it had not struck where it had, dinosaurs may never have gone extinct, you and I would not be here, and things on Earth could look much different.