By: RAS_WEB
In: The Sky Live 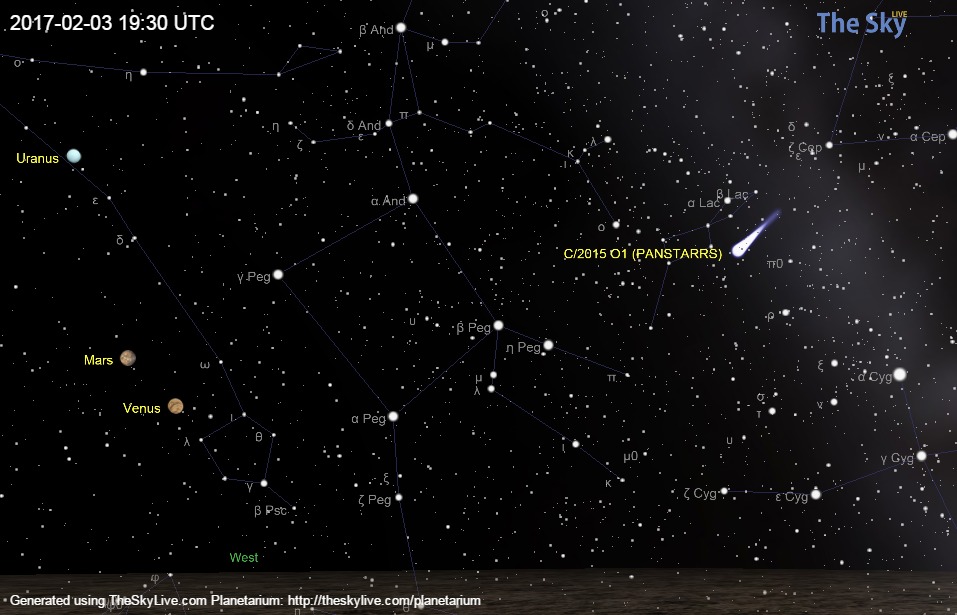 The newly discovered comet C/2015 O1 PANSTARRS has just been added to our catalog of tracked objects. Right now the comet is very far, about magnitude 18.8 at a distance of 987M km from the Sun and it is traveling towards the inner Solar System. It will take about one year and an half to reach its perihelion, on Feb 3, 2017.

C/2015 O1 orbit inclination, about 68°, and perihelion distance, almost exactly 1 Astronomical Unit, contribute to a quite favorable geometry for observing the comet at perihelion from the northern hemisphere during the first days of February 2017. Comet’s declination will be about +47° on Feb 3, so it will be quite high above the North-West horizon for few hours after sunset.

Comet C/2015 O1 position in the sky the evening of Feb 3, 2017, from the northern hemisphere. Click the image to see an interactive sky map

According to the currently predicted light curve, C/2015 O1 could reach approximately magnitude 6-7 around perihelion but comets brightness is very difficult to predict and it is still to early have any realistic expectation.

In any case, C/2015 O1 will definitely be an interesting promising comet to follow during the next 18-24 months!