22 Years Of The Sun From Soho 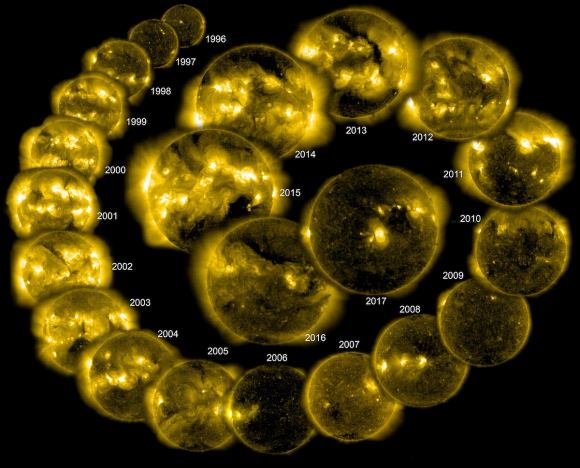 The Solar and Heliospheric Observatory (SOHO) is celebrating 22 years of observing the Sun, marking one complete solar magnetic cycle in the life of our star. SOHO is a joint project between NASA and the ESA and its mission is to study the internal structure of the sun, its extensive outer atmosphere, and the origin of the solar wind.

The activity cycle in the life of the Sun is based on the increase and decrease of sunspots. We’ve been watching this activity for about 250 years, but SOHO has taken that observing to a whole new level.

Though sunspot cycles work on an 11-year period, they’re caused by deeper magnetic changes in the Sun. Over the course of 22 years, the Sun’s polarity gradually shifts. At the 11 year mark, the orientation of the Sun’s magnetic field flips between the northern and southern hemispheres. At the end of the 22 year cycle, the field has shifted back to its original orientation. SOHO has now watched that cycle in its entirety.

The magnetic field of the Sun operates on a 22 year cycle. It takes 11 years for the orientation of the field to flip between the northern and southern hemisphere, and another 11 years to flip back to its original orientation. This composite image is made up of snapshots of the Sun taken with the Extreme ultraviolet Imaging Telescope on SOHO. Image: SOHO (ESA & NASA)

SOHO is a real success story. It was launched in 1995 and was designed to operate until 1998. But it’s been so successful that its mission has been prolonged and extended several times. 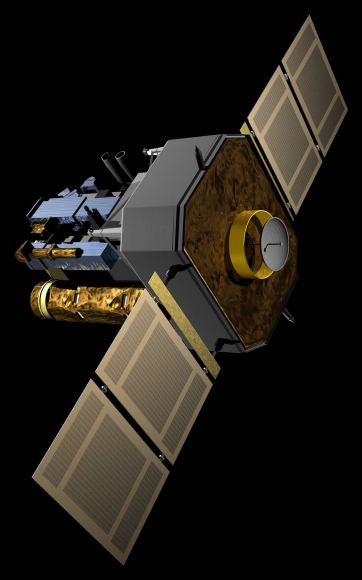 An artist’s illustration of the SOHO spacecraft. Image: NASA

SOHO’s 22 years of observation has turbo-charged our space weather forecasting ability. Space weather is heavily influenced by solar activity, mostly in the form of Coronal Mass Ejections (CMEs). SOHO has observed well over 20,000 of these CMEs.

Space weather affects key aspects of our modern technological world. Space-based telecommunications, broadcasting, weather services and navigation are all affected by space weather. So are things like power distribution and terrestrial communications, especially at northern latitudes. Solar weather can also degrade not only the performance, but the lifespan, of communication satellites.

Besides improving our ability to forecast space weather, SOHO has made other important discoveries. After 40 years of searching, it was SOHO that finally found evidence of seismic waves in the Sun. Called g-modes, these waves revealed that the core of the Sun is rotating 4 times faster than the surface. When this discovery came to light, Bernhard Fleck, ESA SOHO project scientist said, “This is certainly the biggest result of SOHO in the last decade, and one of SOHO’s all-time top discoveries.”

Data from SOHO revealed that the core of the Sun rotates 4 times faster than the surface. Image: ESA

SOHO also has a front row seat for comet viewing. The observatory has witnessed over 3,000 comets as they’ve sped past the Sun. Though this was never part of SOHO’s mandate, its exceptional view of the Sun and its surroundings allows it to excel at comet-finding. It’s especially good at finding sun-grazer comets because it’s so close to the Sun.

“SOHO has a view of about 12-and-a-half million miles beyond the sun,” said Joe Gurman in 2015, mission scientist for SOHO at NASA’s Goddard Space Flight Center in Greenbelt, Maryland. “So we expected it might from time to time see a bright comet near the sun. But nobody dreamed we’d approach 200 a year.”

A front-row seat for sun-grazing comets allows SOHO to observe other aspects of the Sun’s surface. Comets are primitive relics of the early Solar System, and observing them with SOHO can tell scientists quite a bit about where they formed. If a comet has made other trips around the Sun, then scientists can learn something about the far-flung regions of the Solar System that they’ve traveled through. 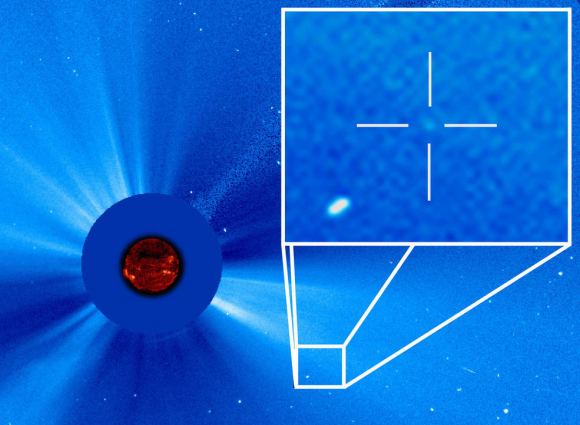 It’s hard to make out, but the dot in the cross-hairs is a comet streaming toward the Sun. This image is from 2015, and the comet is the 3,000th one discovered by SOHO since it was launched. Image: SOHO/ESA/NASA

SOHO is still going strong, and keeping an eye on the Sun from its location about 1.5 million km from Earth. There, it travels in a halo orbit around LaGrange point 1. (It’s orbit is adjusted so that it can communicate clearly with Earth without interference from the Sun.)

Beyond the important science that SOHO provides, it’s also a source of amazing images. There’s a whole gallery of images here, and a selection of videos here. 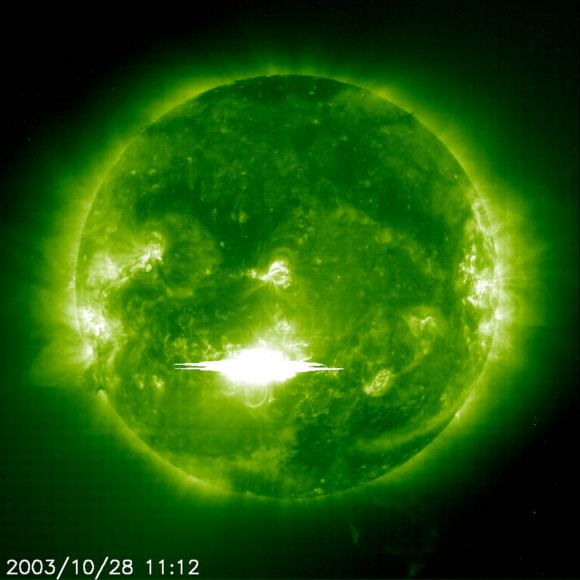 In 2003, SOHO captured this image of a massive solar flare, the third most powerful ever observed in X-ray wavelengths. Very spooky. Image: NASA/ESA/SOHO

You can also check out daily views of the Sun from SOHO here.

The post 22 Years Of The Sun From Soho appeared first on Universe Today.