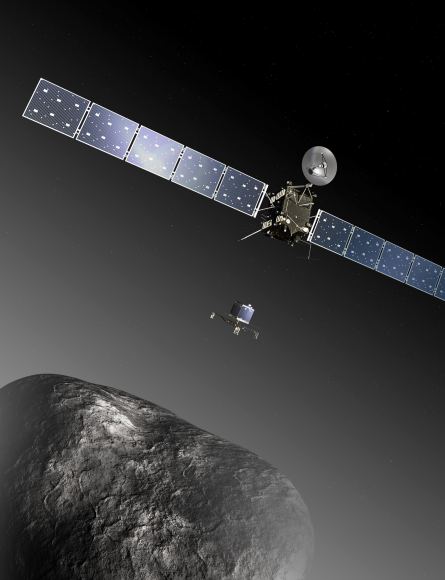 Ever since we’ve been able to get closer looks at comets in our Solar System, we’ve noticed something a little puzzling. Rather than being round, they’re mostly elongated or multi-lobed. This is certainly true of Comet 67P/Churyumov-Gerasimenko (67P or Chury for short.) A new paper from an international team coordinated by Patrick Michel at France’s CNRS explains how they form this way.

The European Space Agency (ESA) spacecraft Rosetta visited 67P in 2014, end even placed its lander Philae on the surface. Rosetta spent 17 months orbiting 67P, and at its closest approach, Rosetta was only 10 km (6 mi) from 67P’s surface. Rosetta’s mission ended with its guided impact into 67P’s surface in September, 2016, but the attempt to understand the comet and its brethren didn’t end then.

An artist’s illustration of the spacecraft Rosetta and the Philae lander at comet 67P C-G. Image: By European Space Agency – Rosetta and Philae at comet, CC BY-SA 3.0-igo,

Though Rosetta’s pictures of 67P are the most detailed comet pictures we have, other spacecraft have visited other comets. And most of those other comets appear elongated or multi-lobed, too. Scientists explain these shapes with a “comet merger theory.” Two comets collide, creating the multi-lobed appearance of comets like 67P. But there’s been a problem with that theory.

In order for comets to merge and come out looking the way they do, they would have to merge very slowly, or else they would explode. They would also have to be very low-density, and be very rich in volatile elements. The “comet merger theory” also says that these types of gentle mergers between comets would have to have happened billions of years ago, in the early days of the Solar System.

The problem with this theory is, how could bodies like 67P have survived for so long? 67P is fragile, and subjected to repeated collisions in its part of the Solar System. How could it have retained its volatiles? 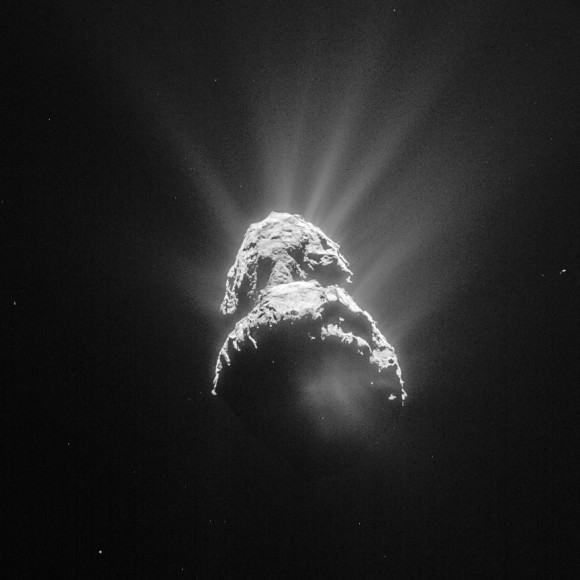 Geysers of dust and gas shooting off the comet’s nucleus are called jets. The volatile material they deliver outside the nucleus builds the comet’s coma. Credit: ESA/Rostta/NAVCAM

In the new paper, the research team ran a simulation that answers these questions.

The simulation showed that when two comets meet in a destructive collision, only a small portion of their material is pulverized and reduced to dust. On the sides of the comets opposite from the impact point, materials rich in volatiles withstand the collision. They’re still ejected into space, but their relative speed is low enough for them to join together in accretion. This process forms many smaller bodies, which keep clumping up until they form just one, larger body.

The most surprising part of this simulation is that this entire process may only take a few days, or even a few hours. The whole process explains how comets like 67P can keep their low density, and their abundant volatiles. And why they appear multi-lobed. 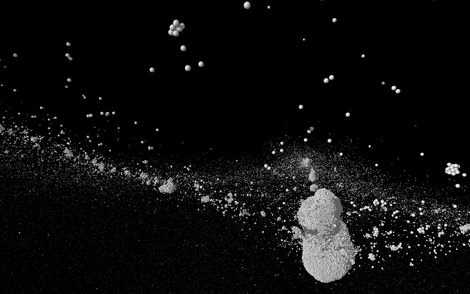 This image from the simulation shows how the ejected material from two bodies colliding re-accretes into a bilobal comet. Image: ESA/Rosetta/Navcam – CC BY-SA IGO 3.0

The simulation also answered another question: how can comets like 67P survive for so long?

The team behind the simulation thinks that the process can take place at speeds of 1 km/second. These speeds are typical in the Kuiper Belt, which is the disc of comets where 67P has its origins. In this belt, collisions between comets are a regular occurrence, which means that 67P didn’t have to form in the early days of the Solar System as previously thought. It could have formed at any time.

The team’s work also explains the surface appearance of 67P and other comets. They often have holes and stratified layers, and these features could have formed during re-accretion, or sometime after its formation. 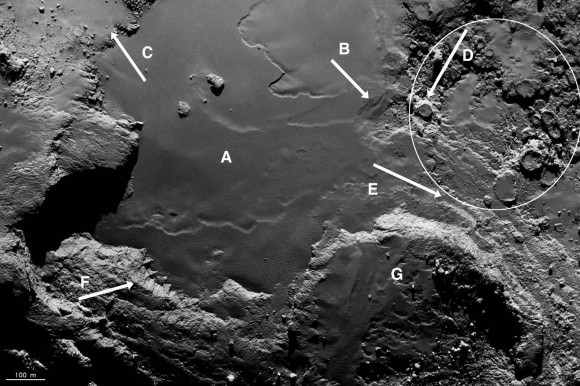 Smooth terrain in the Imhotep region on 67P C-G, showing layering (B) and circular structures or pits (circled). Credit: ESA/Rosetta

One final point from the study concerns the composition of comets. One reason they’re a focus of such intense interest is their age. Scientists have always thought of them as ancient objects, and that studying them would allow us to look back into the primordial Solar System.

Though 67P—and other comets—may have formed much more recently than we used to believe, this process shows that there is no significant amount of heating or compaction during the collision. As a result, their original composition from the the early days of the Solar System is retained intact. No matter when 67P formed, it’s still a messenger from the formative days.

You can watch a video from the simulation here: http://www.dropbox.com/s/u7643hanvva57rp/Catastrophic%20disruptions.mp4?dl=0

The post Rosetta’s 67P Is The Result Of A Collision Of Two Comets appeared first on Universe Today.