Are We Headed Towards Another Deep Solar Minimum? 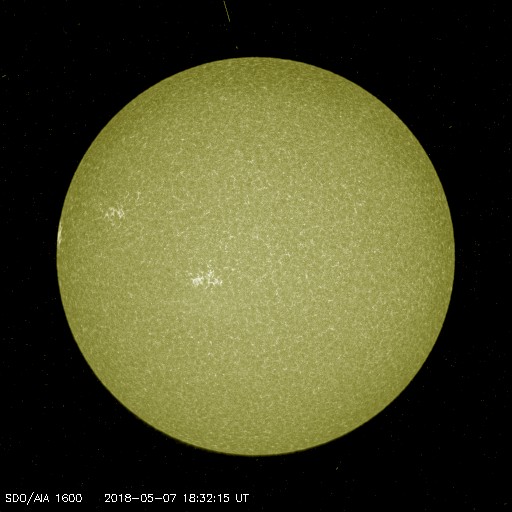 A (nearly) naked Sol… more the norm than the exception these days. Credit: NASA/SDO AIA 512/1600 imager.

Have you been keeping an eye on Sol lately? One of the top astronomy stories for 2018 may be what’s not happening, and how inactive our host star has become.

The strange tale of Solar Cycle #24 is ending with an expected whimper: as of May 8th, the Earthward face of the Sun had been spotless for 73 out of 128 days thus far for 2018, or more than 57% of the time. This wasn’t entirely unexpected, as the solar minimum between solar cycle #23 and #24 saw 260 spotless days in 2009 – the most recorded in a single year since 1913. Cycle #24 got off to a late and sputtering start, and though it produced some whopper sunspots reminiscent of the Sol we knew and loved on 20th century cycles past, it was a chronic under-performer overall. Mid-2018 may see the end of cycle #24 and the start of Cycle #25… or will it?

One nice surprise during Cycle #24 was the appearance of massive sunspot AR 2192, which popped up just in time for the partial solar eclipse of October 23rd, 2014. Several times the size of the Earth, the spot complex was actually the largest seen in a quarter century. But just as “one swallow does not a Summer make,” one large sunspot group couldn’t save Solar Cycle #24. 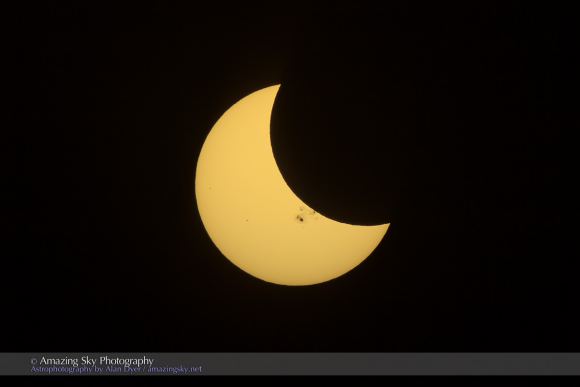 The partial eclipse of the Sun, October 23, 2014, as seen from Jasper, Alberta, shot under clear skies through a mylar filter, on the front of a 66mm f/6 apo refractor using the Canon 60Da for 1/8000 (!) sec exposure at ISO 100. The colors are natural, with the mylar filter providing a neutral “white light” image. The big sunspot on the Sun that day is just beginning to disappear behind the Moon’s limb. The mylar filter gave a white Sun, its natural colour, but I have tinted the Sun’s disk yellow for a more pleasing view that is not just white Sun/black sky. Image credit and copyright: Alan Dyer/Amazing Sky.net

The Sun goes through an 11-year sunspot cycle, marked by the appearance of new spots at mid- solar latitudes, which then slowly progress to make subsequent appearances closer towards the solar equator, in a pattern governed by what’s known as Spörer’s Law. The hallmark of a new solar cycle is the appearance of those high latitude spots. The Sun actually flips overall polarity every cycle, so a proper Hale Cycle for the Sun is actually 11 x 2 = 22 years long.

A big gaseous fusion bomb, the Sun actually rotates once every 25 days near its equator, and 34 days at the poles. The Sun’s rotational axis is also tipped 7.25 degrees relative to the ecliptic, with the northern rotational pole tipped towards us in early September, while the southern pole nods towards us in early March.

An animation of massive susnpot AR 2192 crossing the Earthward face of Sol from October 17th to October 29th, 2014. Credit: NASA/SDO.

What’s is store for Cycle #25? One thing’s for certain: if the current trend continues, with spotless days more the rule than the exception, we could be in for a deep profound solar minimum through the 2018 to 2020 season, the likes of which would be unprecedented in modern astronomy.

Fun fact: a similar dearth of sunspots was documented during the 1645-1715 period referred to as the Maunder Minimum. During this time, crops failed and the Thames River in London froze, making “frost fairs” along its frozen shores possible. Ironically, the Maunder Minimum also began just a few decades after the dawn of the age of telescopic astronomy. During this time, the idea of “spots on the Sun” was regulated to a controversial, and almost mythical status in mainstream astronomy.

Keeping Vigil on a Tempestuous (?) Star

We’ve managed to study the last two solar cycles with unprecedented scrutiny. NASA’s STEREO-A and -B spacecraft (Only A is currently active) monitors the farside of the Sun from different vantage points. The Solar Dynamics Observatory (NASA SDO) keeps watch on the Sun across the electromagnetic spectrum. And our favorite mission, the joint NASA/European Space Agency’s SOHO spacecraft, has monitored the Sun from its sunward L1 Lagrange vantage point since it launched in 1995—nearly through one complete 22 year Hale Cycle by mid- 2020s. Not only has SOHO kept a near-continuous eye on Sol, but it’s also discovered an amazing 3,398 sungrazing comets as of September 1st, 2017… mostly due to the efforts of diligent online amateur astronomers.

A guide to features on the Sun. The left view in Calcium-K shows the photosphere and is similar to a standard whitelight view, and the right view shows features in the chromosphere in hydrogen-alpha. Credit: Paul Stewart Instagram: @Upsidedownastronomer/annotations by Dave Dickinson

…and did you know: we can actually model the solar farside currently out of view from the Earth to a high degree of fidelity thanks to the advent of powerful computational methods used in the nascent field of solar helioseismology.

Unfortunately, this low ebb in the solar cycle will also make for lackluster aurora in the years to come. It’s a shame, really… the relatively powerful cycles of the 1970s and 80s hosted some magnificent aurorae seen from mid-latitudes (and more than a few resulting blackouts). We’re still getting some minor outbursts, but you’ll have to venture “North/South of the 60” to really see the aurorae in all of its splendor over the next few years.

But don’t take our word for it: get out there and observe the Sun for yourself. Don’t let this discourage you when it comes to observing the Sun. Even near its minimum, the Sun is a fascinating target of study… and unlike most astronomical objects, the face of the Sun can change very quickly, sometimes erupting with activity from one hour to the next.

We like to use a Coronado Personal Solar Telescope to monitor the Sun in hydrogen-alpha for prominences and filaments: such a scope can be kept at the ready to pop outside at lunch time daily for a quick look. For observing sunspots and the solar photosphere in white-light, you’ll need an approved glass filter which fits snugly over the aperture end of your telescope or camera, or you can make a safe solar filter with Baader Safety Film.

Does the sunspot cycle tell the whole picture? Certainly, the Sun most likely has longer, as yet undiscovered cycles. For about a century now, astronomers have used the Wolf Sunspot Number as calculated mean average to describe the current state of activity seen on the Sun. An interesting study calls this method into question, and notes that the direction and orientation of the heliospheric current sheet surrounding the Sun seems to provide a better overall depiction of solar activity.

Other mysteries of the Sun include: just why does the solar cycle seem baked in at 11 years? Why don’t we ever see spots at the poles? And what’s in store for the future? We do know that solar output is increasing to the tune of 1% every 100 million years… and a billion years from now, Earth will be a toasty place, probably too warm to sustain liquid water on its surface…

Which brings us to the final point: what role does the solar cycle play versus albedo, global dimming and climate? This is a complex game to play: Folks have literally gone broke trying to link the solar cycle with terrestrial human affairs and everything from wheat crops to stock market fluctuations. Many a climate change-denier will at least concede that the current climate of the Earth is indeed changing, though they’ll question human activity’s role in it. The rather ominous fact is, taking only current solar activity into account, we should be in a cooling trend right now, a signal in the data that anthropogenic climate change is working hard against.

See for yourself. You can keep track of Sol’s daily activity online: our favorite sites are SpaceWeather, NOAA’s space weather/aurora activity page, and the SOHO and SDO websites.

Be sure to keep tabs of Sol, as the next solar minimum approaches and we ask the question: will Cycle #25 occur at all?

Well, we’re finally emerging from our self-imposed monastic exile that is editing to mention we’ve got a book coming out later this year: The Universe Today Ultimate Guide to Viewing the Cosmos: Everything You Need to Know to Become an Amateur Astronomer, and yes, there’s a whole chapter dedicated to solar observing and aurora. The book is up for pre-order now, and comes out on October 23rd, 2018!

The post Are We Headed Towards Another Deep Solar Minimum? appeared first on Universe Today.