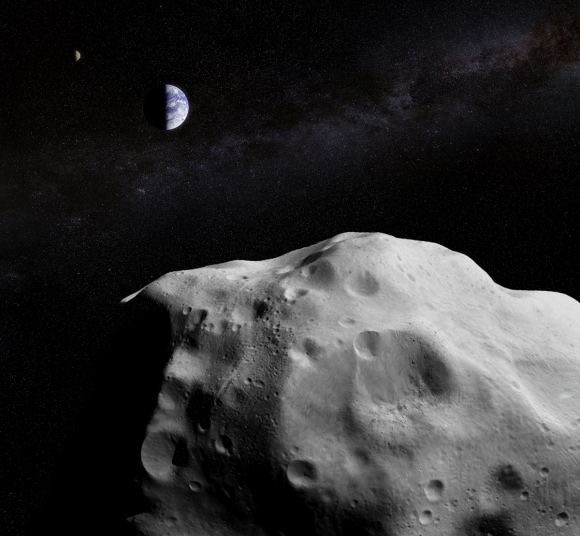 Missed us… a concept image of a large asteroid passing by the Earth-Moon system. Credit: A combination of ESO/NASA images courtesy of Jason Major/Lights in the Dark.

It’s a shooting gallery out there. The spattered face of Earth’s Moon and large impact sites such as Meteor Crater outside of Flagstaff, Arizona remind us that we still inhabit a dangerous neck of the solar neighborhood. But despite the inevitable cries proclaiming the “End of the World of the Week” this coming weekend, humanity can breathe a collective sigh of relief next Wednesday on April 19th, when asteroid 2014 JO25 passes safely by the Earth.

To be sure, lots of smaller space rocks pass by the Earth closer than the Moon (that’s an average of 240,000 miles distant) on a monthly basis. Take for example 4-meter asteroid 2017 GM, which passed just 16,000 kilometers distant on April 4th. What makes 2014 JO25 special is its size: measurements from NASA’s NEOWISE mission suggest that 2014 JO25 is about 2,000 feet (650 meters) along its longest axis, about twice the length of a Nimitz-class aircraft carrier. 2014 JO25 is passing 1.1 million miles (1.8 million kilometers) or 4.6 times the Earth-Moon distance on Wednesday, the closest large asteroid pass since 5-km Toutatis in September, 2004. The next predicted large asteroid pass near Earth is 1999 AN10, set to pass 1 LD (lunar distance) from the Earth in 2027. 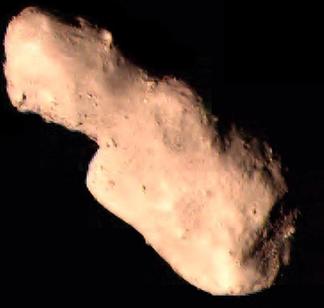 Discovered on May 5th, 2014 by the Catalina Sky survey, asteroid 2014 JO25 orbits the Sun once every three years, taking it from a perihelion of 0.237 AU (interior to Mercury’s orbit) out to an aphelion of 3.9 distant in the asteroid belt, interior to Jupiter’s orbit. 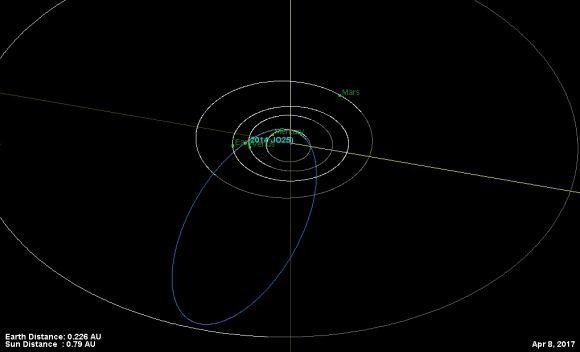 Finding 2014 JO25 at its Closest Approach

With an estimated albedo (surface brightness) about twice that the lunar surface, 2014 JO25 will reach magnitude +10 to +11 on closest approach on Wednesday. Currently low in the dawn sky in the Square of Pegasus asterism, asteroid 2014 JO25 passed perihelion sunward as seen from the Earth at 1.015 Astronomical Units (AU) distant on March 11th. At its closest to the Earth on April 19th at 12:24 Universal Time (UT)/6:24 AM EDT, asteroid 2014 JO25 will skim the jagged Draco-Ursa Minor border below the bowl of the Little Dipper, moving at a whopping three degrees per hour. Sitting just 25 degrees from the north celestial pole on closest approach, catching sight of 2014 JO25 at favors western North America and northeastern Asia, though the eastern half of North America and Europe have a shot at the asteroid a few hours prior to closest approach in the early morning hours of April 19th. North American viewers get another shot at catching the fleeting asteroid later the same evening 13 hours after closest approach as the asteroid sails through the galaxy-rich constellation Coma Berenices. 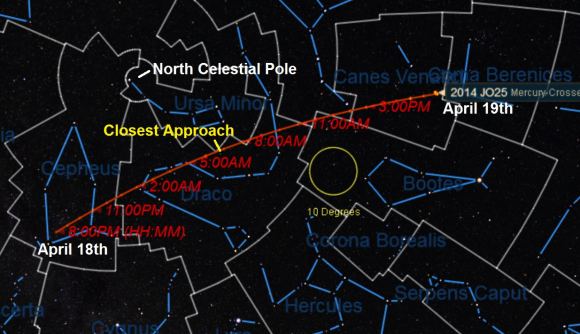 At +11th magnitude, you’ll need a telescope of at least 6” aperture or larger and a good star chart to nab 2014 JO25 as it glides against the starry background. Fellow Universe Today contributor Bob King has some great star charts of the pass over at Sky & Telescope. The Moon will be at Last Quarter phase on the morning of the 19th, providing moderate light pollution.

Clouded out? The good folks at the Virtual Telescope Project have you covered, with a live webcast featuring the passage of NEO 2014 JO25 starting at 21:30 UT/5:30 PM EDT on April 19th.

And if you’re out hunting for asteroids on the coming mornings, there are currently two bright binocular comets in the dawn sky to keep you company: Comet C/2017 E4 Lovejoy in the constellation Andromeda and Comet C/2015 ER61 PanSTARRS in Aquarius. Both are currently performing above expectations at about magnitude +7. 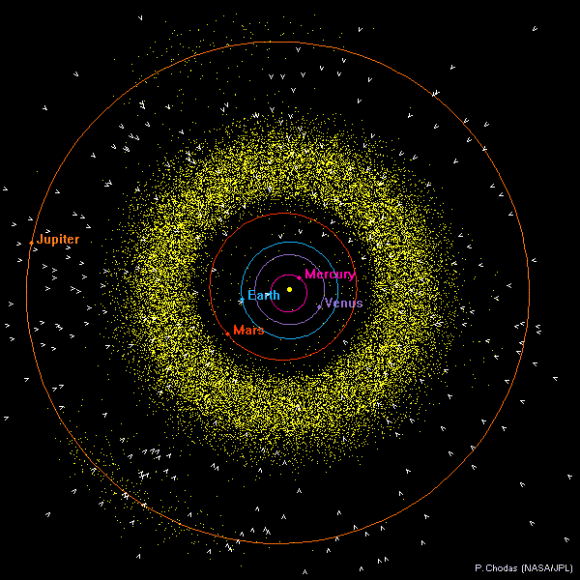 “What if” an asteroid the size of 2014 JO25 hit the Earth? Well, the Chelyabinsk meteor was an estimated 20 meters in size; the impactor that formed Meteor Crater in Arizona was about 50 meters in diameter. The Chicxulub event off the Yucatan peninsula 66 million years ago was an estimated 10 kilometer-sized impactor well over ten orders of magnitude bigger than 2014 JO25. While the impact of a 600 meter asteroid would be a noteworthy event and a bad day locally, it would pale in comparison to an extinction level event.

All something to consider, as you watch the faint dot of asteroid 2014 JO25 pass harmlessly by the Earth and through the news cycle for the coming week.