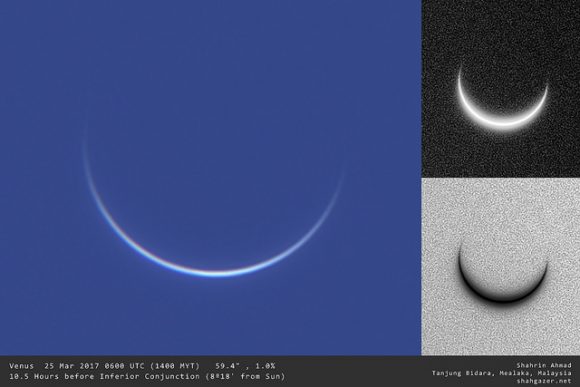 Have you seen it yet? An old friend greeted us on an early morning run yesterday as we could easily spy brilliant Venus in the dawn, just three days after inferior conjunction this past Saturday on March 25th.

This was an especially wide pass, as the planet crossed just over eight degrees (that’s 16 Full Moon diameters!) north of the Sun. We once managed to see Venus with the unaided eye on the very day of inferior conjunction back in 1998 from the high northern latitudes of the Chena Flood Channel just outside of Fairbanks, Alaska.

The planet was a slender 59.4” wide, 1% illuminated crescent during this past weekend’s passage, and the wide pass spurred many advanced imagers to hunt for the slim crescent in the daytime sky. Of course, such a feat is challenging near the dazzling daytime Sun. Safely blocking the Sun out of view and being able to precisely point your equipment is key in this endeavor. A deep blue, high contrast sky helps, as well. Still, many Universe Today readers rose to the challenge of chronicling the horns of the slender crescent Venus as they rotated ’round the limb and the nearby world moved once again from being a dusk to dawn object.

The orbit of Venus is tilted 3.4 degrees with respect to the Earth, otherwise, we’d get a transit of the planet like we did on June 5-6th, 2012 once about every 584 days, instead of having to wait again until next century on December 10th, 2117.

The joint NASA/European Space Agency’s SOlar Heliospheric Observatory (SOHO) mission also spied the planet this past weekend as it just grazed the 15 degree wide field of view of its Sun-observing LASCO C3 camera: 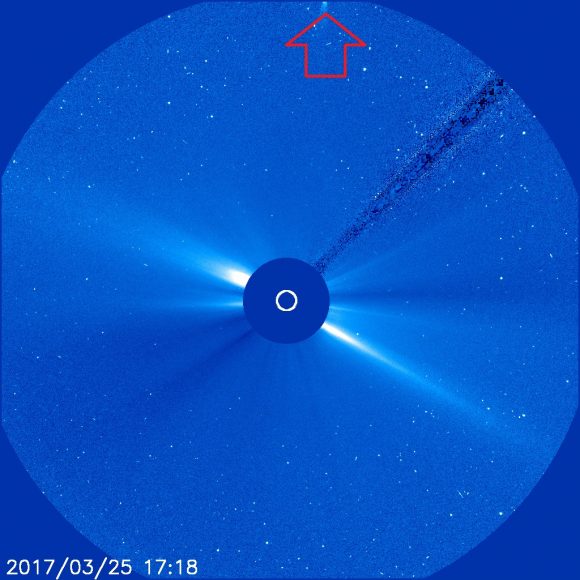 The glow of Venus (arrowed) just barely bleeding over into the field of view of SOHO’s LASCO C3 camera. Credit: SOHO/NASA/LASCO

Venus kicks off April as a 58” wide, 3% illuminated crescent and ends the month at 37” wide, fattening up to 28% illumination. On closest approach, the planet presents the largest apparent planetary disk possible as seen from the Earth. Can you see the horns? They’re readily readily apparent even in a low power pair of hunting binoculars. The coming week is a great time to try and see a crescent Venus… with the naked eye. Such an observation is notoriously difficult, and right on the edge of possibility for those with keen eyesight.

One problem for seasoned observers is that we know beforehand that (spoiler alert) that the Horns of Venus, like the Moon, always point away from the direction of the Sun.

True Story: a five year old girl at a public star party once asked me “why does that ‘star’ look like a tiny Moon” (!) This was prior to looking at the planet through a telescope. Children generally have sharper eyes than adults, as the lenses of our corneas wear down and yellow from ultraviolet light exposure over the years.

Still, there are tantalizing historical records that suggest that ancient cultures such as the Babylonians knew something of the true crescent nature of Venus in pre-telescopic times as well. 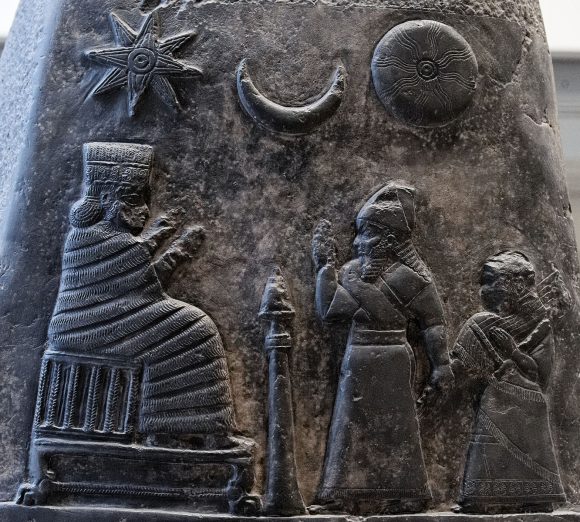 The Babylonian frieze of Kudurru Melishipak on display at the Louvre, depicting the Sun Moon and Venus. According to some interpretations, the goddess Ishtar (Venus) is also associated with a crescent symbol… possibly lending credence to the assertion that ancient Babylonian astronomers knew something of the phases of the planet from direct observation. Credit: Wikimedia Commons/Image in the Public Domain.

Another fun challenge in the coming months is attempting to see Venus in the daytime. This is surprisingly easy, once you know exactly where to look for it. A nearby crescent Moon is handy, as occurs on April 23rd, May 22nd, and June 20th. 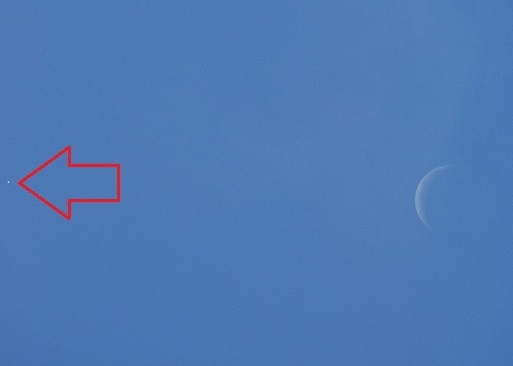 Venus (arrowed) near the daytime Moon. Photo by author.

Strangely enough, the Moon is actually darker than dazzling Venus in terms of surface albedo. The ghostly daytime Moon is just larger and easier to spot. Many historical ‘UFO’ sightings such as a ‘dazzling light seen near the daytime Moon’ by the startled residents of Saint-Denis, France on the morning on January 13th, 1589 were, in fact, said brilliant planet. 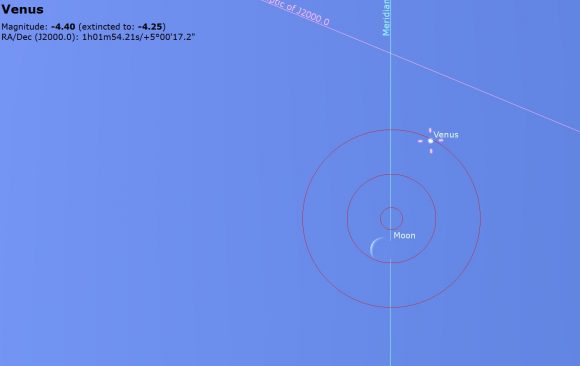 The Moon near Venus on May 22nd. Credit: Stellarium.

Venus can appear startlingly bright to even a seasoned observer. We’ve seen the planet rise as a shimmering ember against a deep dark twilight sky from high northern latitudes. Air traffic controllers have tried in vain to ‘hail’ Venus on more than one occasion, and India once nearly traded shots with China along its northern border in 2012, mistaking a bright conjunction of Jupiter and Venus for spy drones.

The third brightest object in the sky behind the Sun and the Moon, Venus is even bright enough to cast a shadow as seen from a dark sky site, something that can be more readily recorded photographically.

Watch our nearest planetary neighbor long enough, and it will nearly repeat the same pattern for a given apparition. This is known as the eight year cycle of Venus, and stems from the fact that 13 Venusian orbits (8x 224.8 days) very nearly equals eight Earth years.

Follow Venus through the dawn in 2017, and it will eventually form a right triangle with the Earth and the Sun on June 3rd, reaching what is known as greatest elongation. This can vary from 47.2 to 45.4 degrees from the Sun, and this year reaches 45.9 degrees elongation in June. The planet then reaches half phase known as dichotomy around this date, though observed versus theoretical dichotomy can vary by three days. The cause of this phenomenon is thought to be the refraction of light in Venus’ dense atmosphere, coupled with observer bias due to the brilliance of Venus itself. When do you see it?

Also, keep an eye out for the ghostly glow on the night-side of Venus, known as Ashen Light. Long thought to be another trick of the eye, there’s good evidence to suggest that this long reported effect actually has a physical basis, though Venus has no large reflecting moon nearby… how could this be? The leading candidate is now thought to be air-glow radiating from the cooling nighttime side of the planet.

Cloud enshrouded Venus held on to its secrets, right up until the Space Age less than a century ago… some observers theorized that the nighttime glow on Venus was due to aurorae, volcanoes or even light pollution from Venusian cities (!). This also fueled spurious sightings of the alleged Venusian moon Neith right up through the 19th century.

Venus should also put in a showing 34 degrees west of the Sun shining at magnitude -4 during the August 21st, 2017 total solar eclipse. Follow that planet, as it makes a complex meet up with Mars, Mercury, and the Moon in late September of this year.

-Read about planets, occultations, comets and more for the year in our 101 Astronomical Events for 2017, out as a free e-book from Universe Today.