Tales of the King: Watch as the Moon Occults Regulus for North America This Weekend 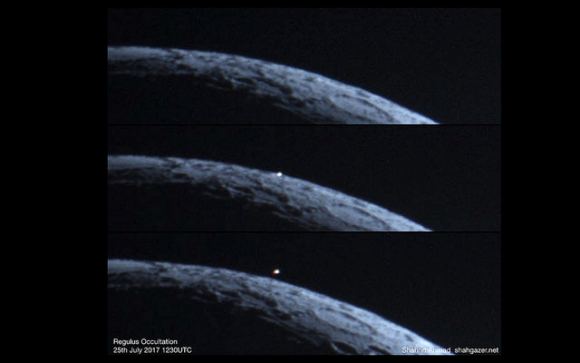 Up early Sunday morning? Or perhaps, as we often do, you’re “pulling an all-nighter,” out observing until the break of dawn. Well, the clockwork celestial mechanics of the Universe has a treat in store on the morning of October 15th, as the waning crescent Moon occults (passes in front of) the bright star Regulus (Alpha Leonis, the “Little King” or “Heart of the Lion”) for the contiguous United States, Mexico and southern Canada. 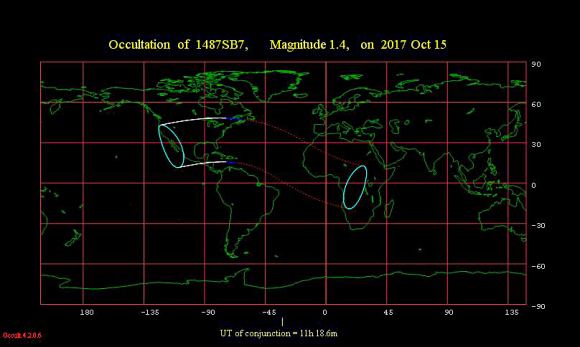 You might call this one the “Great American Occultation,” as it takes a similar track to a certain total solar eclipse and another occultation of the bright star Aldebaran earlier this year. The Moon is a 20% illuminated waning crescent during Sunday’s occultation, about the best phase for such an event, as you’ll also get a nice contrasting Earthshine or Ashen light on dark nighttime limb of the Moon. That’s sunlight from the waxing gibbous Earth, illuminating the (cue Pink Floyd) Dark Side of the Moon. 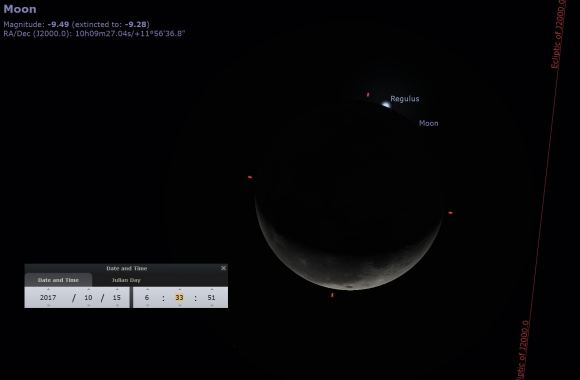 Early morning occultations always see the target star or planet ingress (passing behind) the oncoming bright limb of the waning Moon, then egress (reappearing) from behind its dark limb. During waxing evening occultations, the reverse is true, as the dark limb of the Moon leads the way. The Moon will be 53 degrees west of the Sun during the event, and folks in the western U.S. will see the occultation lower to the eastern horizon under dark skies, while observers from Florida to the Great Lakes will see the event transpire under twilight skies and observers in the U.S. northeast will see the occultation finish up after sunrise. Shining at magnitude +1.4, you’ll be able to see the disappearance and reappearance of Regulus with the unaided eye, though events on the dark limb are always more dramatic. And you may just be able to spy Regulus in the daytime post sunrise near the Moon after the occultation, using binoculars or a telescope.

Observers along a line running from Oregon through Lake of the Woods, above the Great Lakes and north of New Brunswick are also in for a treat as you just might be able to catch a rare grazing occultation of Regulus, (see the video below) as the star’s light shines down through those lunar valleys and gets blocked by mountain peaks along the limb of the Moon. Such an event can be quite dramatic to watch, as the star light winks in and out during the very last second of its 79 light year journey.

A look at the occultation circumstances for selected locations tells the story. The International Occultation Timing Association has a full list for locales across North America.

The Moon is in the midst of a cycle of occultations of Regulus running from December 18th, 2016 to the final one for the cycle on April 24th, 2018. This is number 12 in a series of 19 events, and the best pre-dawn occultation of Regulus for the United States in the current cycle. 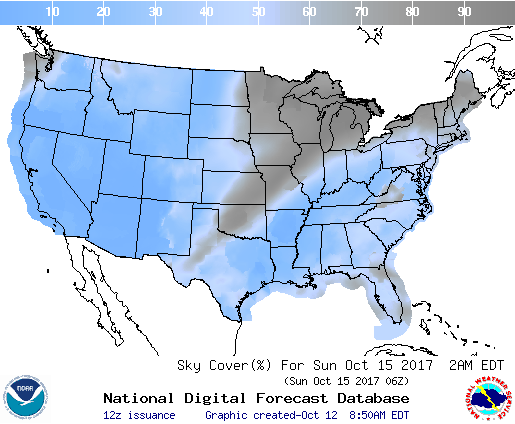 US cloud cover percentages, a few hours before the occultation. Credit: NOAA

The Moon can occult four bright +1st magnitude stars during the current epoch: Regulus, Antares, Spica and Aldebaran. And though Regulus lies closest to the ecliptic plane, it actually gets occulted the least of any 1st magnitude star in the 21st century, with only 220 events. The Moon actually also occulted the bright star Pollux up until almost two millennia ago, and will resume doing so again in the future.

Occultations are easy to observe, and one of the few times (including eclipses) were you can see the motion of the Moon, in real time. The Moon moves its own diameter (30′ or half a degree) per hour, and the reemergence of the bright star will be an abrupt “lights back on” for Regulus. Does it seem to linger a bit between the horns of the crescent Moon? This often reported optical illusion is called the Coleridge Effect, from a line from Samuel Coleridge’s (not Iron Maiden’s) Rime of the Ancient Mariner:

While clome above the Eastern bar

The horned Moon, with one bright star

Happen to see Regulus “a clome ‘atween the tips?” We also like to refer to this as the ‘Protor and Gamble effect’ due to the company’s traditional star-filled logo.

Occultations also adorn the flags of many Middle Eastern countries. The star and crescent of Islam traces back to antiquity, but was said to have been adapted for the Turkish flag after Sultan Alp Arslan witnessed a close pairing shortly after the Battle of Manzikert on August 26th, 1071 AD. Though Venus is usually stated as the legendary “star,” Regulus was in fact, just a few degrees away from the Moon on the very same morning… perhaps adding some credence to a major legend vexing vexillology? 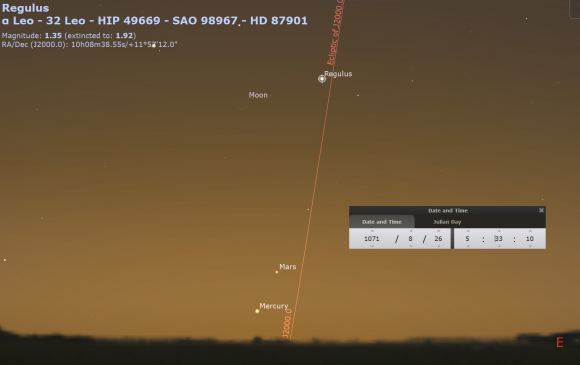 The Moon and Regulus on the morning of August 26th, 1071 AD. Stellarium.

Of course, we may never truly know just what Sultan Arsulan saw. A more recent occultation tale was featured in the November 2017 issue of Sky and Telescope, positing the an occultation of Aldebaran by the Moon on March 7th, 1974 was the source of William Wilkins’ alleged “Volcano on the Moon…” the timing is certainly right, though one wonders how a skilled observer like Wilkins could be fooled by a prominent star (wistful thinking, maybe?)

Recording an occultation is as easy as aiming a video camera at the Moon through a telescope and letting it run. Start early, and make sure you’ve got the contrast between the bright limb of the Moon and the star adjusted, so both appear in the frame. We like to have WWV radio running in the background for an accurate time hack on the video.

Regulus also has a suspected (though never seen) white dwarf companion. Such a star should shine at +12th magnitude or so… and just might make a very brief appearance on the dark limb of the Moon during egress. One total unknown is its position angle, which is a big wild card, but you just never know… its worth examining that video afterwards, especially if you’re shooting at a high frame rate.

…and speaking of occultations, we’re in the midst of combing through near double occultations of bright stars and planets out to 3000 A.D… hey, it’s what we do for fun. Anyhow, we’re tweeting these out as @Astroguyz as we find ’em, one per day. As a teaser, I give you this grazing occultation of Venus and Regulus over Siberia coming right up in 2025: 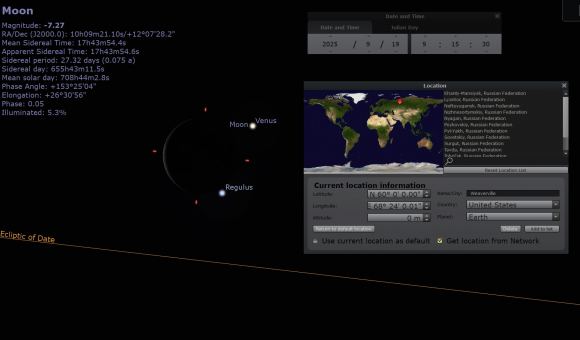 The Moon occults Venus and Regulus in 2025. Stellarium.

If nothing else, the cosmic grin of a planet, star and crescent Moon does hint at the Universe’s strange sense of humor.

The post Tales of the King: Watch as the Moon Occults Regulus for North America This Weekend appeared first on Universe Today.