Ring of Fire: Catch the Only Annular Solar Eclipse of 2017 This Sunday 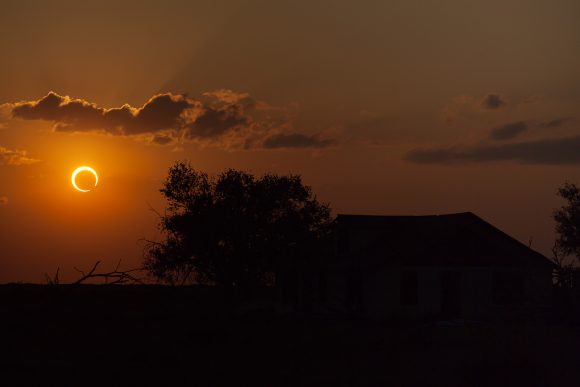 ‘Tis the season… eclipse season that is, as a spectacular “ring of fire” annular solar eclipse marks the end of the first of two eclipse cycles for 2017. And although the annular path for this eclipse passes through some sparsely populated parts of the southern hemisphere, we just might get some amazing live views, courtesy of modern technology and some intrepid observers willing to adventurously trek after the shadow of the Moon.

Unlike many of the uncertainties in life, eclipses are sure to happen, a certainty ordained by orbital mechanics. Well, okay, the Vogons could always blow the Moon to smithereens this fine Thursday afternoon… but otherwise, we’re in for a true celestial show.

The eclipse begins far out in the South Pacific at sunrise, and the path of annularity makes first landfall along the southern coast of Chile at 13:31 Universal Time (UT). The eclipse antumbra then races eastward over Argentina at 2.5 kilometers per second, as the “ring of fire” heads out over the South Atlantic where it reaches “maximum annularity” of just 44 seconds 900 kilometers southeast of Brazil. Finally, the 30 kilometer wide path touches down over Angola, nicks Zambia and ends at sunset over a southern track along the Democratic Republic of the Congo. The eclipse is partial across southern portion of South America, the Falkland Islands a swath of Antarctica and southwestern Africa.

The aspects of the February 26th, 2017 annular eclipse. Credit: F.Espenak/NASA/GSFC

Here are the partial prospects for select cities:

Sunday’s eclipse is the first of two solar eclipses for 2017, and the only annular eclipse for the year. We get an annular eclipse when the Moon is near apogee (which occurred eight days ago on February 18th) and the Earth is near perihelion (which occurred last month on January 4th). At this time, the apparent size of the Moon is too small to cover the Sun as seen from the Earth, resulting instead in a brilliant annulus or “ring of fire” in the sky. Likewise, we refer to the shadow trace of this ring across the Earth as an antumbra, instead of the familiar umbra of a total solar eclipse.

Strange as it may seem, annular eclipses are slightly more common than total solar eclipses in our current epoch, and will become increasingly more so as the Moon slowly recedes from the Earth.

The alignment needed for an annular eclipse. Credit: The National Observatory of Japan.

Unlike a total solar eclipse, safety precautions must be taken during all phases of an annular solar eclipse. We witnessed the 1994 annular eclipse from the shores of Lake Erie, and can attest that 1% of the Sun is still pretty darn bright. Use only telescope and camera filters or glasses designed specifically for solar observing, even during the annular phase. Venus should also be a splendid sight for those observing near sunset from Africa, as the Cytherian world shines at -4.3 magnitude 34 degrees east of the Sun. Viewers in southwestern African nations will also be treated to a setting Sun during the eclipse, affording the chance to include the spectacle in shots along with foreground objects on the local horizon if skies are clear. 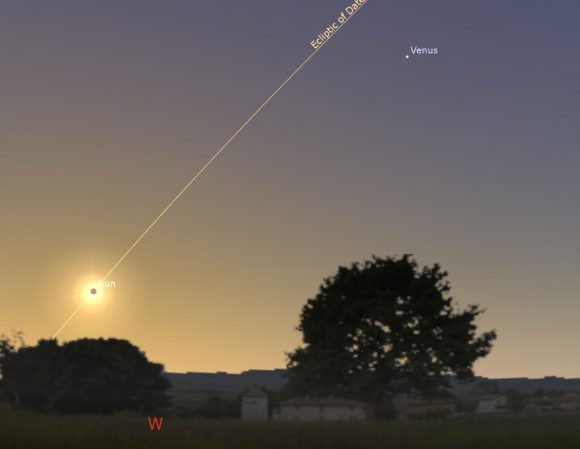 The eclipse versus Venus as seen from the path through Angola. Credit: Stellarium.

Clouded out? Live on the wrong part of the planet? There are actually several options to watch the eclipse live:

the venerable SLOOH plans to webcast the eclipse.

Time and Date will provide a webcast starting at 12:05 UT from Angola:

Watch this space: we’ll be dropping in more live webcasts of the eclipse as they turn up.

Plan on doing an ad hoc webcast of Sunday’s eclipse from anywhere along the annular or partial track? Let us know!

Sunspot activity is currently at a lull, and the Earthward face of Sol may well be blank come eclipse day. At an eclipse magnitude of 99.22%, this eclipse juuuusst misses being a hybrid/total. It’s also possible to catch the brief flashes of Bailey’s Beads along the edge of the antumbral graze line.

Tales of the Saros

This eclipse is member 29 of 71 for saros cycle 140, stretching all the way back to April 16th, 1512 and running out to June 1st, 2774. If you caught the February 16th, 1999 annular eclipse from the Australian Outback, then you witnessed the last eclipse in saros 140. Stick around until March 9th, 2035 and you can then complete an exeligmos or triple saros cycle, joining an elite club of eclipse-chasing adventurers, indeed.

Eclipses occur in pairs or sometimes triplets, when the nodes where the Moon’s orbit intersect the position of the Sun and the Earth’s shadow along the ecliptic plane. These nodes move due to orbital precession of the Moon’s path around the Earth. If the Moon weren’t inclined relative to the ecliptic, we’d see a lunar and solar eclipse every synodic month. The February 11th penumbral eclipse ushered in the current eclipse season, which ends with this weekend’s annular eclipse. 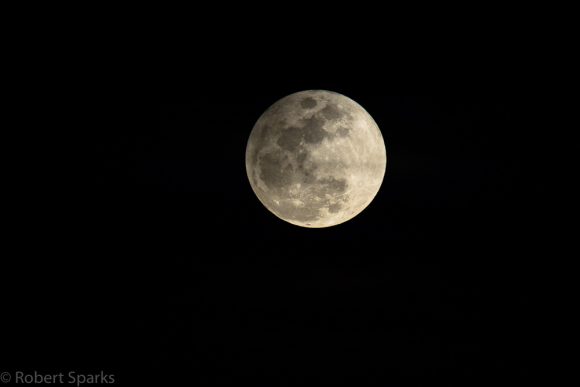 The penumbral eclipse from earlier this month, ushering in eclipse season 1 of 2 for 2017. Credit and Copyright: Rob Sparks.

There is an ISS transit over SW Africa at around 15:45 UT, offering a chance to catch a transit of the station across the partially eclipsed Sun. Sun observing spacecraft in low Earth orbit including Hinode and Proba-2 also usually get good views of the eclipse.

New Moon sightings: And for the rest of the world, the hunt will be on to recover the slim waxing crescent Moon post-eclipse on the evening of Monday, February 27th. This lunation, first sighting opportunity without optical assistance favors southeast Asia.

Then, its on to eclipse season number two, featuring a partial lunar eclipse on August 7th, and then the big ticket event: the total eclipse of the Sun spanning the contiguous United States from coast to coast. Umbraphiles have been planning for this one and its brief 160 seconds maximum of totality for well over a decade now, no lie. Where will YOU be?

-Send those eclipse pics in to Universe Today Flickr.

-Read more about eclipses, occultations, comets and more for the year in our free e-book: 101 Astronomical Events for 2017.

The post Ring of Fire: Catch the Only Annular Solar Eclipse of 2017 This Sunday appeared first on Universe Today.