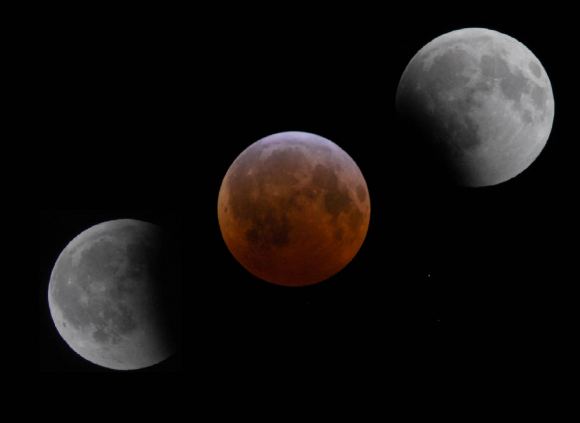 Can you feel the tremor in the Force? Early next Wednesday morning internet astro-memes collide, in one of the big ticket sky events of the year, with a total lunar eclipse dubbed as — get ready — a Super Blue Blood Moon total lunar eclipse.

Specifics on the eclipse: That’s a mouthful, for sure. This is the first eclipse of 2018, and only one of two featuring totality, lunar or solar. Wednesday morning’s eclipse favors the region centered on the Pacific Rim, with regions of Asia and Australia seeing the evening eclipse at moonrise, while most of North America will see totality early Wednesday morning at moonset. Only the regions of the Canadian Maritimes and the United States east of the Mississippi misses out on the spectacle’s climax, catching a partially eclipsed Moon setting in the west at sunrise. 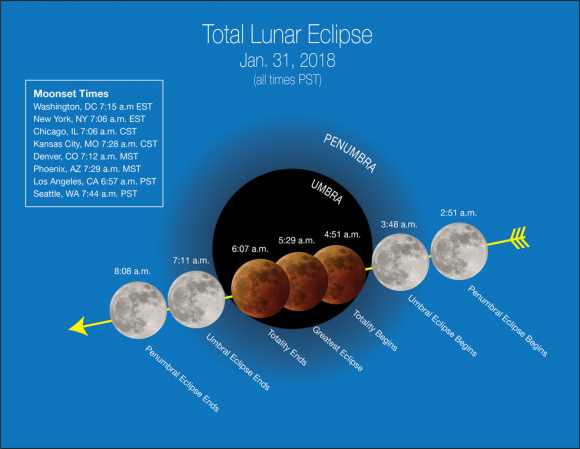 The path of the Moon through the Earth’s shadow and the circumstances for the January 31st, super blue blood Moon total lunar eclipse. NASA

What’s all the fuss about? Let’s dissect the eclipse, meme by meme:

Why it’s Super: Totality for this eclipse lasts 1 hour, 16 minutes and 4 seconds, the longest since April 15th, 2014. Full Moon (and maximum duration for this eclipse) occurs at 13:30 Universal Time (UT), just 27 hours after the Moon reaches perigee the day prior on January 30th at 9:55 UT . Note that this isn’t quite the closest perigee of the year in space and time: the January 1st Full Moon perigee beat it out for that title by 2,429 km (1509 miles) and 23 hours. 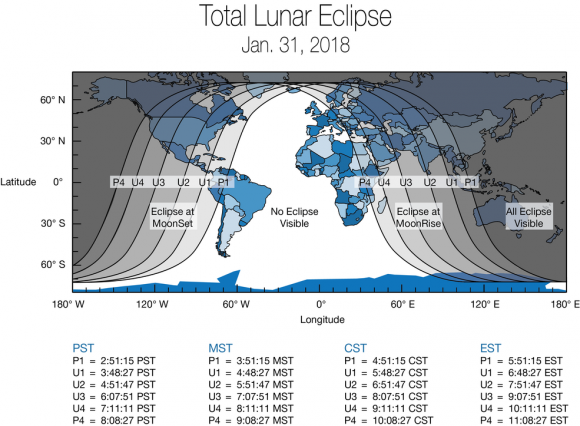 Why it’s Blue: This is the second Full Moon of the month, making this month’s Moon “Blue” in the modern sense of the term. This definition comes down to us thanks to a misinterpretation in the July 1943 issue of Sky & Telescope. The Maine Farmer’s Almanac once used an even more convoluted definition of a Blue Moon as “the third Full Moon in an astronomical season with four,” and legend has it, used blue ink in the almanac printing to denote that extra spurious Moon… anyone have any old Maine Farmer’s Almanacs in the attic to verify the tale?

Note that Blue Moons aren’t all that rare… the month of March 2018 also hosts two Full Moons, while truncated February 2018 contains none, sometimes referred to as a “Black Moon”.

Why All the Blood: The cone of the Earth’s umbra or dark inner shadow isn’t completely devoid of light. Instead, you’re seeing sunlight from all the Earth’s sunrises and sunsets around its limb, filtered into the shadow of the the planet onto the nearside of the Moon. Standing on the Earthward facing side of the Moon, you would witness a solar eclipse as the Earth passed between the Moon and the Sun. Unlike the neat near fit for solar eclipses on the Earth, however, solar eclipses on the Moon can last over an hour, as the Earth appears about three times larger than the disk of the Sun. And although astronauts have witnessed eclipses from space, no human has yet stood on the Moon and witnessed the ring of fire surrounding the Earth during a solar eclipse.

Tales of the Saros: For saros buffs, this eclipse is member 49 of 74 lunar eclipses for lunar saros cycle 124, stretching all the way back to August 17th, 1152. If you caught the total lunar eclipse on January 21st, 2000, you saw the last eclipse in this cycle. Stick around until April 18th, 2144 AD and you can watch the final total lunar eclipse for saros 124.

Unlike total solar eclipses, lunar eclipses are leisurely affairs. The entire penumbral phase of the eclipse lasts for over 5 hours, though you probably won’t notice the subtle shading on the limb of the Moon until its about halfway immersed in the Earth’s penumbral shadow.

Not all total lunar eclipses are the same. Depending on how deep the Moon passes through the Earth’s shadow and the murkiness of the Earth’s atmosphere, the Moon can appear anywhere from a sickly orange, to a deep brick red during totality… for example, the Moon almost disappeared entirely during a total lunar eclipse shortly after the eruption of Mount Pinatubo in the early 1990s!

The color of the Moon during totality is known as its Danjon Number, with 4 being bright with a bluish cast on the outer limb of the Moon, and 0 appearing dark and deep red.

This is also one of the only times you can see that the Earth is indeed round with your own eyes as the curve of the shadow cast by our homeworld falls back across the Moon. This curve is the same, regardless of the angle, and whether the Moon is high above near the zenith, or close to the horizon.

-Clouded out, or on the wrong side of the planet? Watch the January 31st eclipse live courtesy of the Virtual Telescope Project.