Cosmic Watch Review: A Unique Perspective on the Night Sky 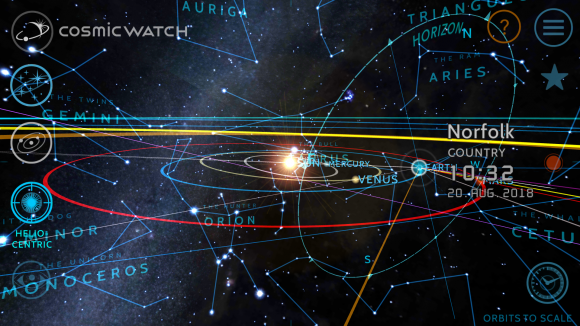 A view along the Solar System, using Cosmic Watch.

Watching the heavens on a nightly, or even casual basis? The web and modern technology has certainly altered the landscape of modern astronomy, (mostly) for the better. Once, we all huddled around cardboard planispheres, illuminated by red flashlights; now, it’s now a common sight to see illuminated smartphone apps accompanying telescopes at star parties, all waving skyward with virtual planetarium programs guiding users around the night sky.

We’ve used a few different planetarium apps over the past few years, mostly as curiosities and teaching tools. One of the latest apps we’ve had a pleasure of reviewing and using in the field is known as Cosmic Watch, both in its original and upgraded versions.

The Basics of the App

Launched in 2015, Cosmic Watch started out as a unique utility, letting the user toggle between an apparent geocentric (Earth-centered), solar system heliocentric and observer-based view (new with the second 2.0 release). The geocentric view is fun to play with, as many of the old planetarium armillary sphere views of the sky from the Middle Ages presented just such an ‘outside in’ view of the world and the sky above. The geocentric view is handy, say, to see exactly where the Sun is at the zenith for a particular time, or for that matter, the relative position of the Moon, planets or any of the given constellations. 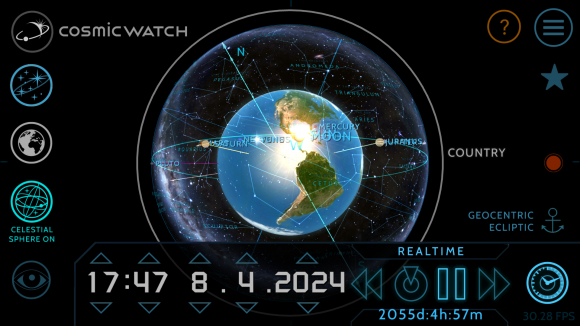 A screenshot, representing a topocentric view of the April 8th, 2024 total solar eclipse across the United States. Credit: Cosmic Watch.

And speaking of constellations, Cosmic Watch uses the proper astronomical constellations along the zodiac vs astrological houses such as Capricornus instead of Capricorn, Scorpius instead of Scorpio, etc., something lots of astronomy apps get wrong!

What’s new: What’s especially handy is the new astronomical viewer setting, showing the sky as seen from your GPS-enabled location, currently overhead. You can scroll around, zoom in and out, or simply snap back to the view as seen from the current angle of the phone’s camera using the GPS by toggling the ‘compass’ setting back on. This mode is very responsive on our aging Galaxy S6 Edge+ running Android, and is handy for preplanning a night out. 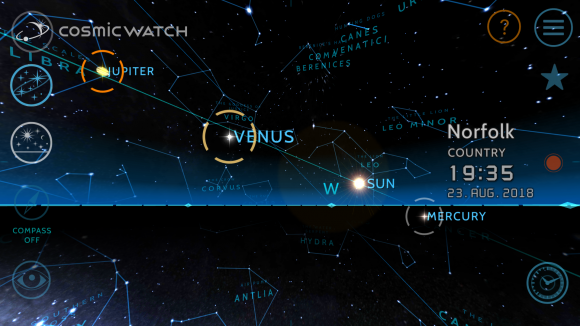 What we’d really like to see is a planetarium application accurate enough to boresight and use to point a telescope accurately, simply by mounting the smartphone on the body of the ‘scope. We noticed that while traveling to the Nebraska Star Party recently, that the location update was a bit cantankerous. It would be great if it just sensed the location change via the GPS and upgraded accordingly… but maybe this was an issue with the phone GPS and not the app itself?

We also like the fact that there are no popup ads, an annoying feature on other astronomy apps, especially when you’re trying to scroll around the sky or preserve your night vision in a dim red light mode setting. Cosmic Watch costs $4.99, and is available for Apple and Android.

Speaking of which, we’d love to see a red light filter mode built into a future version of Cosmic Watch. We’d also like to see twilight and perhaps light pollution settings using limiting magnitudes, to show maybe a more realistic view of the sky that you’ll really see tonight.

Cosmic Watch gives you unique views through time over the current 3000 year long epoch, from 0 to 3000 AD. Unfortunately, it doesn’t take the Precession of the Equinoxes or stellar proper motion into account for these distant views in time, another nifty possibility for a future update. We would also love to see the addition of a telrad finder for telescope pointing on a future update.

The creator of Cosmic Watch is looking to add moons and their orbits around the planets. According to Mahipal Nehra on the Cosmic Watch Development team, other possible implementations for a 3.0 upgrade may include real time weather, space weather and  upgraded and custom location settings, along with a widget for a possible smartwatch app for Cosmic Watch users.

Overall, we think that Cosmic Watch offers the user a unique and streamlined perspective on the night sky and our place in the Universe. It might actually make a nifty gift for those astrologically-minded friends (we’ve all got ’em) as a gateway drug into the real science of astronomy and watching the night sky.