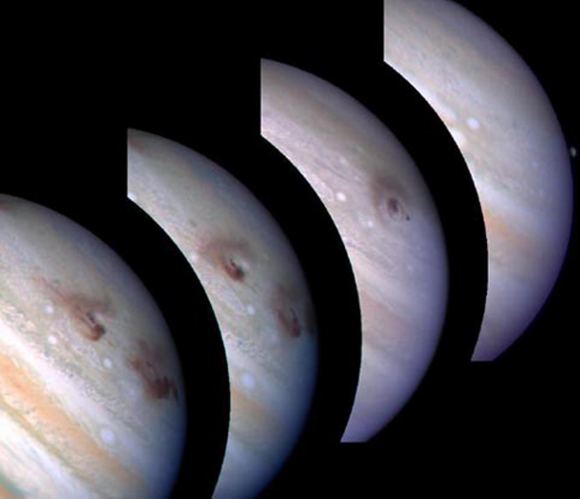 Are you keeping a eye on Jupiter? The King of the Planets, Jove presents a swirling upper atmosphere full of action, a worthy object of telescopic study as it heads towards another fine opposition on May 9th, 2018.

The study is especially interesting, as it primarily focused in on flashes chronicled by amateur imagers and observers in recent years. In particular, researchers focused on impact events witnessed on March 17th 2016 and May 26th, 2017, along with the comparison of exogenous (of cosmic origin) dust measured in the upper atmosphere. This allowed researchers to come up with an interesting estimate: Jupiter most likely gets hit by an asteroid 5-20 meters in diameter (for comparison, the Chelyabinsk bolide was an estimated 20 meters across) 10 to 65 times every year, though researchers extrapolate that a dedicated search might only nab an impact flash or scar once every 0.4 to 2.4 years or so.

Compare this impact rate with the Earth, which gets hit by a Chelyabinsk-sized 20-meter impactor about once every half century or so. Incidentally, we know this impact rate on Earth better than ever before, largely due to U.S. Department of Defense classified assets in space continually watching for nuclear tests and missile launches, which also pick up an occasional meteor “photobomb.” 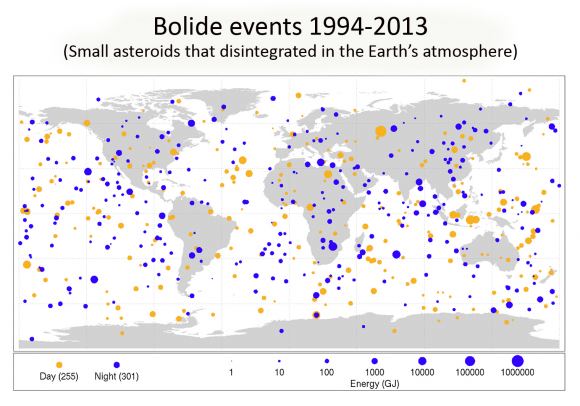 Small asteroid impacts over the span of the Earth over a 20 year period. NASA/Planetary Science.

One reason we may never have witnessed a meteor impact on Jupiter is, astronomers (both professional and amateur) never thought to look for them. The big wake-up call was the impact of Comet Shoemaker-Levy 9 in July 1994, an event witnessed by the newly refurbished Hubble Space Telescope as the resulting impact scars were easily visible in backyard telescopes for weeks afterward. Back in the day, speculation was rampant in the days leading up to the impact: would the collision be visible at all? Or would gigantic Jupiter simply gobble up the tiny comet fragments with nary a belch?

Australian amateur astronomer Anthony Wesley also caught an interesting impact (scar?) in 2009, and every few years or so, we get word of an elusive flash reported on the Jovian cloudtops, sometimes corroborated by a secondary independent observation or a resulting impact scar, and sometimes not. 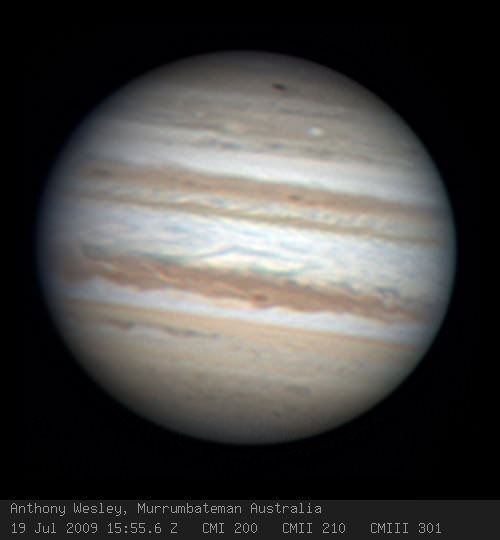 Of course, there are factors which will lower said ideal versus the actual observed impact rate. There’s always a month or so a year, for example, when Jupiter is near solar conjunction on the far side of the Sun, and out of range for observation. Also, we only see half of the Jovian disk from our Earthly perspective at any given time, and we’re about to lose our only set of eyes in orbit around Jupiter – NASA’s Juno spacecraft – later this summer, unless there’s a last minute mission extension.

On the plus side, however, Jupiter is a fast rotator, spinning on its axis once every 9.9 hours. This also means that near opposition, you can also track Jupiter through one full rotation in a single evening. 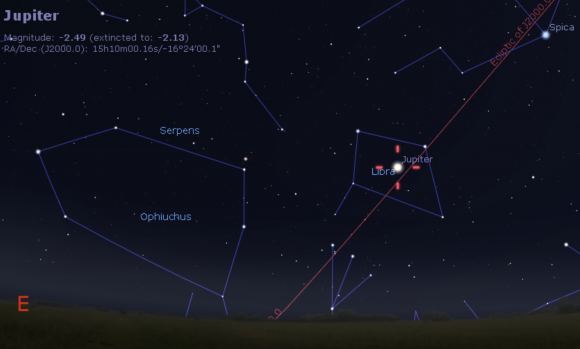 Then there’s the planet’s location in the sky: Currently, Jupiter’s crossing the southern constellation of Libra, and opposition for Jove moves about one astronomical constellation eastward along the ecliptic a year. Jupiter will bottom out along the ecliptic in late 2019, and won’t pop back up north of the celestial equator until May 2022. And while it’s not impossible for northern observers to keep tabs on Jupiter when it’s down south, we certainly get more gaps in coverage around this time.

Should we hail Jove as a protective ‘cosmic goal-tender,’ or fear it as the bringer of death and destruction? There are theories that Jupiter may be both: for example, Jupiter altered the inbound path of Comet Hale-Bopp in 1997, shortening its orbital period from 4,200 to 2,533 years. The 2000 book Rare Earth even included the hypothesis of Jupiter as a cosmic debris sweeper as one of the factors for why life evolved on Earth… if this is true, it’s an imperfect one, as Earth does indeed still get hit as well.

All reasons to keep an eye on Jupiter in the 2018 opposition season.