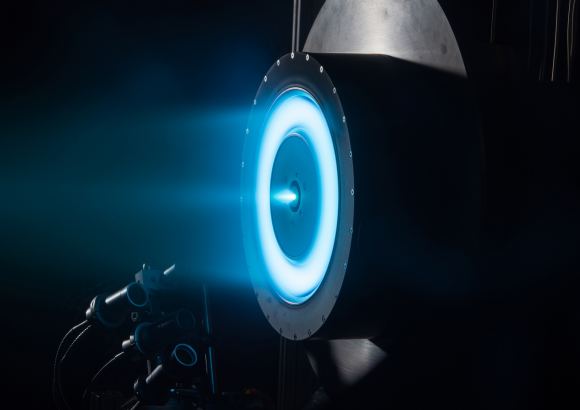 When it comes to the next generation of space exploration, a number of key technologies are being investigated. In addition to spacecraft and launchers that will be able to send astronauts farther into the Solar System, NASA and other space agencies are also looking into new means of propulsion. Compared to conventional rockets, the goal is to create systems that offer reliable thrust while ensuring fuel-efficiency.

To this end, NASA has paired with Aerojet Rocketdyne, a California-based rocket and missile propulsion manufacturer, to develop a Solar Electric Propulsion (SEP) Hall Effect thruster. Known as the Advanced Electric Propulsion System (AEPS), the company recently completed a successful early systems integration test on this thruster, which will enable deep space exploration missions as well as commercial space endeavors.

The test took place at NASA’s Glenn Research Center and focused on the discharge supply unit (DSU) and the power processing unit (PPU), which were combined with a NASA-development thruster and then tested in a thermal vacuum chamber. The test proved that the system could covert power efficiently, turning solar energy into thrust while producing minimal waste heat.

As Eileen Drake, the CEO and president of Aerojet Rocketdyne, said in a recent company press release:

““Our AEPS discharge supply unit performed exceptionally, yielding significant conversion efficiency improvements important for future demanding missions. These results are a testament to the Aerojet Rocketdyne team’s focus and dedication to advancing the state of the art in this critical in-space technology area.”

Much like conventional Hall Effect thrusters, SEP relies on an electrical field to ionize and accelerate a propellant (in most cases, a noble gas like xenon). In the case of SEP, the necessary electricity is generated by photovoltaic cells (aka. solar panels). An immediate benefit of this kind of system is that it can offer thrust comparable to a conventional chemical propulsion system, but using one-tenth the propellant.

Using a 10 kW SEP thruster system and 425 kg (937 lbs) of xenon propellant, the Dawn spacecraft was able to reach a maximum speed of 41,260 km/h (mph). This most recent test involved a 13-kilowatt system, and Aerodyne plans to scale that up in the coming years. For example, a 50-kW SEP thruster system is planned for use on NASA’s proposed Lunar Orbital Platform-Gateway (LOP-G) – formerly known as the Deep Space Gateway. 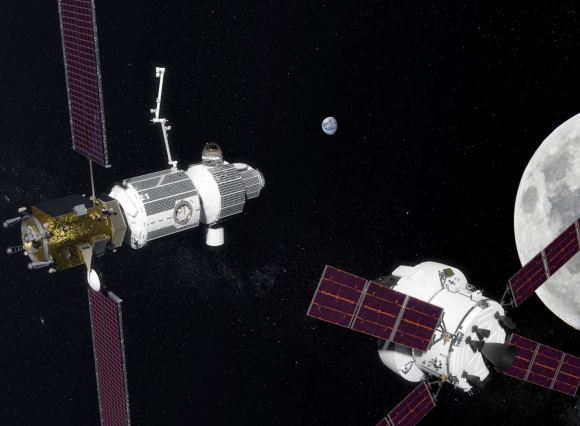 This space station, which will be built in orbit around the Moon, will facilitate future missions to the lunar surface, as well as serving as a launching point for the first crewed missions to Mars, and deeper into the Solar System. As Drake indicated:

“By staying on the cutting edge of propulsion technology, we have positioned ourselves for a major role not only in getting back to the Moon, but also in any future initiative to send people to Mars. AEPS is the vanguard for the next generation of deep space exploration and we’re thrilled to be at the mast.”

With this latest test complete, the team will now move onto the design finalization and verification phase, which will be followed by the critical design review (CDR) – where the thruster’s design will be finalized and cleared for production. If all goes as planned, the 50-kW version of this system will serve as the Power and Propulsion Element (PPE) on the Lunar Orbital Platform-Gateway (LOP-G).

And when it comes time for NASA to send astronauts back to the Moon and conduct its “Journey to Mars”, Aerojet Rocketdyne’s engines will play a key tole. These include the RS-25 and RL-10 engines for the core and upper stage of the Space Launch System (SLS) as well as the jettison motor on the Orion spacecraft – a key component in the Orion’s Launch Abort System (LAS).

Alongside reusable rockets, space planes, single-stage-to-orbit rockets and other systems, Solar Electric Propulsion is all about reinvigorating space exploration while simultaneously reducing costs. With their combination of reliable thrust and fuel efficiency, SEP systems will enable smaller, lighter, and less expensive missions, opening up new opportunities for space exploration.